The common view of Inuit art centres around breathtaking soapstone carvings, sculptures and printmaking, but in reality, the body of work is as wide as the tundra is vast.

Thousands of traditional and cutting edge works of Inuit art will be on display to the general public starting March 27, when Qaumajuq, the Winnipeg Art Gallery’s new Inuit Art Centre, officially opens.

CBC News profiled nine artist who have work in the inaugural exhibit, INUA — a name that means “spirit” or “life force” in many Arctic dialects, according to the WAG, and is also an acronym for Inuit Nunangat Ungammuaktut Atautikkut — or “Inuit Moving Forward Together,” a name that reflects the curator’s vision for Qaumajuq.

Their pieces will be showcased alongside others from the WAG’s 14,000-work collection from the North, including 7,400 on long-term loan from the Nunavut government.

Onlookers will get to admire a range of works, from 80-year-old carvings to a new sealskin spacesuit and more.

Artist Jesse Tungilik helped create something truly out of this world.

Tungilik was a resident at Concordia University, where he collaborated with INUA head curator Heather Igloliorte, who teaches at the Montreal university.

The pair brought a group of Inuit students to the Canadian Space Agency, headquartered in Longueuil, Que., for a rare glimpse of a standard-issue spacesuit that inspired the piece on display at Qaumajuq.

They interviewed people at the agency and learned about how spacesuits work.

WATCH | The story of the sealskin spacesuit: 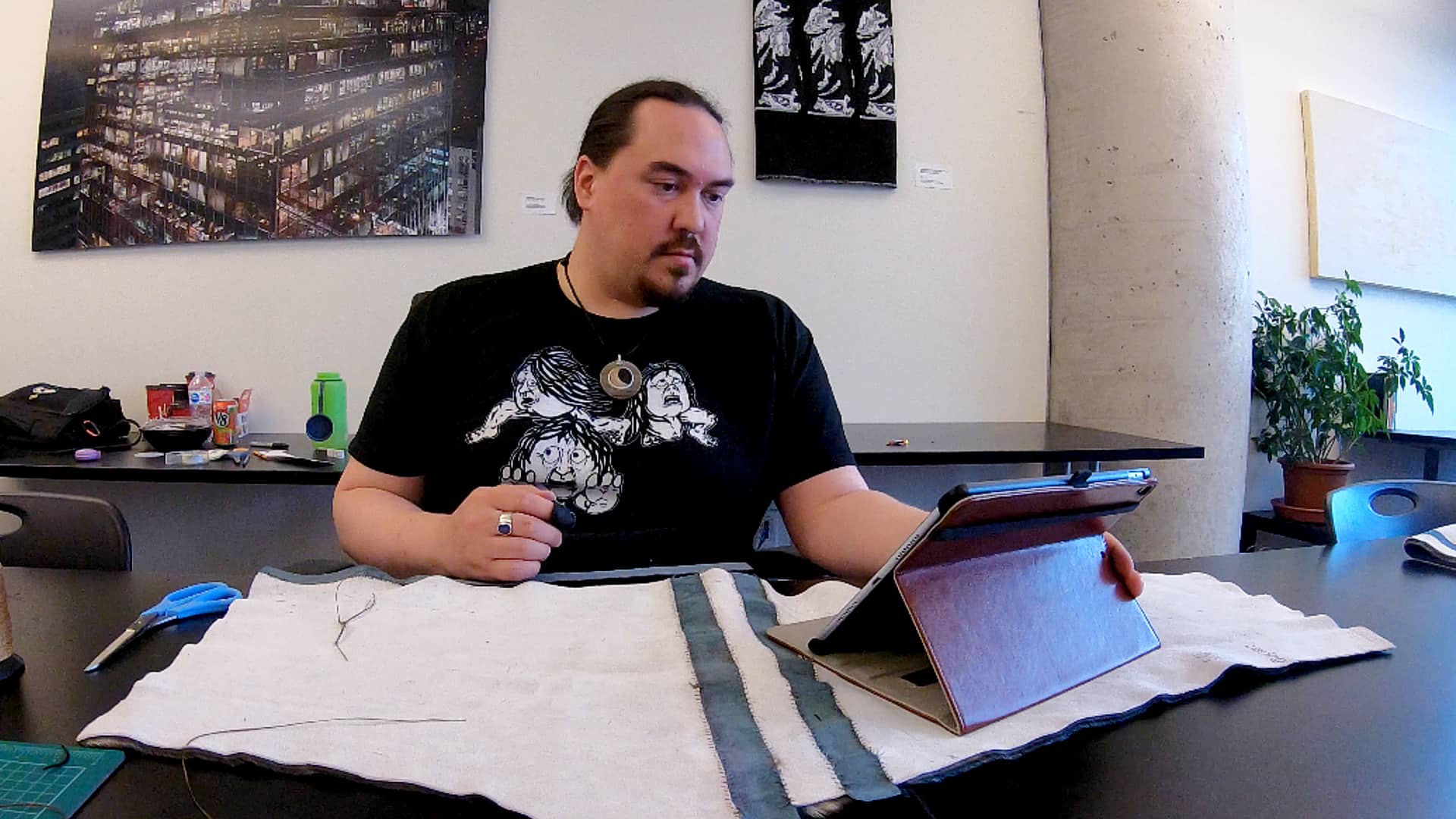 Jesse Tungilik, Heather Igloliorte, Glenn Gear and students from Concordia University put together a spacesuit made of sealskin and other materials as part of Qaumajuq’s opening exhibit. 1:43

Tungilik worked with students to create a design for a sealskin spacesuit. Igloliorte beaded a Nunavut patch on one side, and artist Glenn Gear knitted a NASA patch in syllabics.

“It also speaks to an Inuit futurity,” said Igloliorte. “Why can’t we have Inuit in space in the future? Why wouldn’t we imagine ourselves like anyone else, capable of accomplishing amazing things?”

Glenn Gear takes visitors through an immersive experience that explores mythology from Nunatsiavut’s past and reflections of the future.

One such myth is depicted in black-and-white illustrations of the sky, animals and land of the north.

The large scene covers all surfaces in an exhibit pod, and tells the tale of what happened to the first people to land in Labrador. 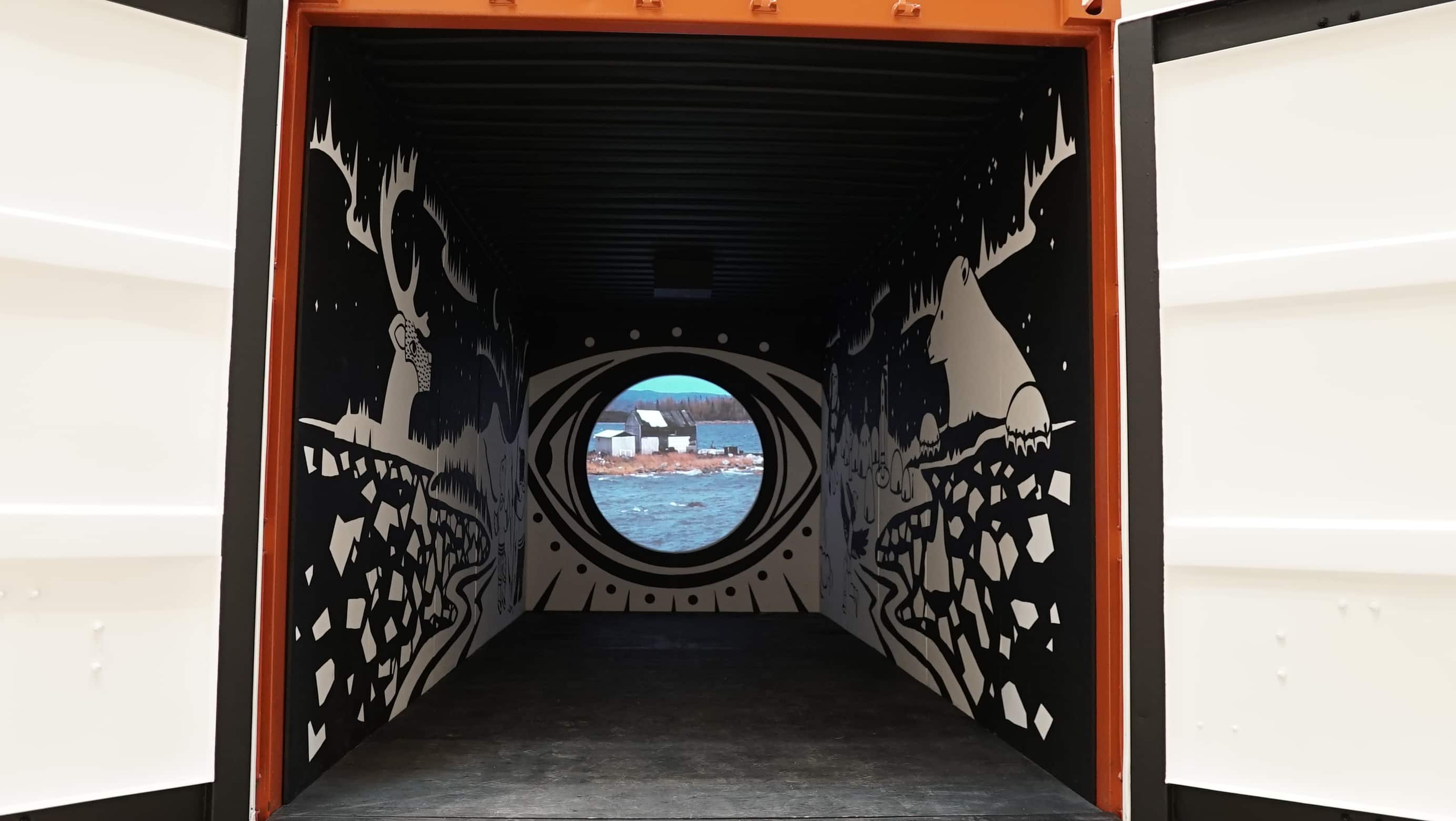 Glenn Gear has created a large-scale immersive experience for Qaumajuq’s opening exhibit, INUA. The pod is painted with a scene from a Nunatsiavut myth about how the northern lights were created. 2:21

According to the story, an elder broke ground with a spear and struck the mineral labradorite — a shiny, multi-coloured stone — freeing frozen spirits within that ascended to the heavens to become the northern lights, said Gear.

The other half of the exhibit is a futuristic take on the land, with spaceships and animals donning rocket packs in the traditional setting.

“We’re going to open the doors for a lot of contemporary Inuit artists and Indigenous artists,” Gear said, “and really celebrate the breadth and depth of work and the diversity of work so that we’re moving away from these notions of just Inuit art as being carvings and drawings and printmaking.”

More than meets the eye

The Winnipeg Art Gallery commissioned Beatrice Deer and Julie Grenier to create a contemporary piece using sealskin for the opening.

The pair put a modern, fashionable twist on the arnauti, which is similar to an amauti — a garment used by Inuit mothers for baby-carrying.

WATCH | The making of a fashion-forward arnauti: 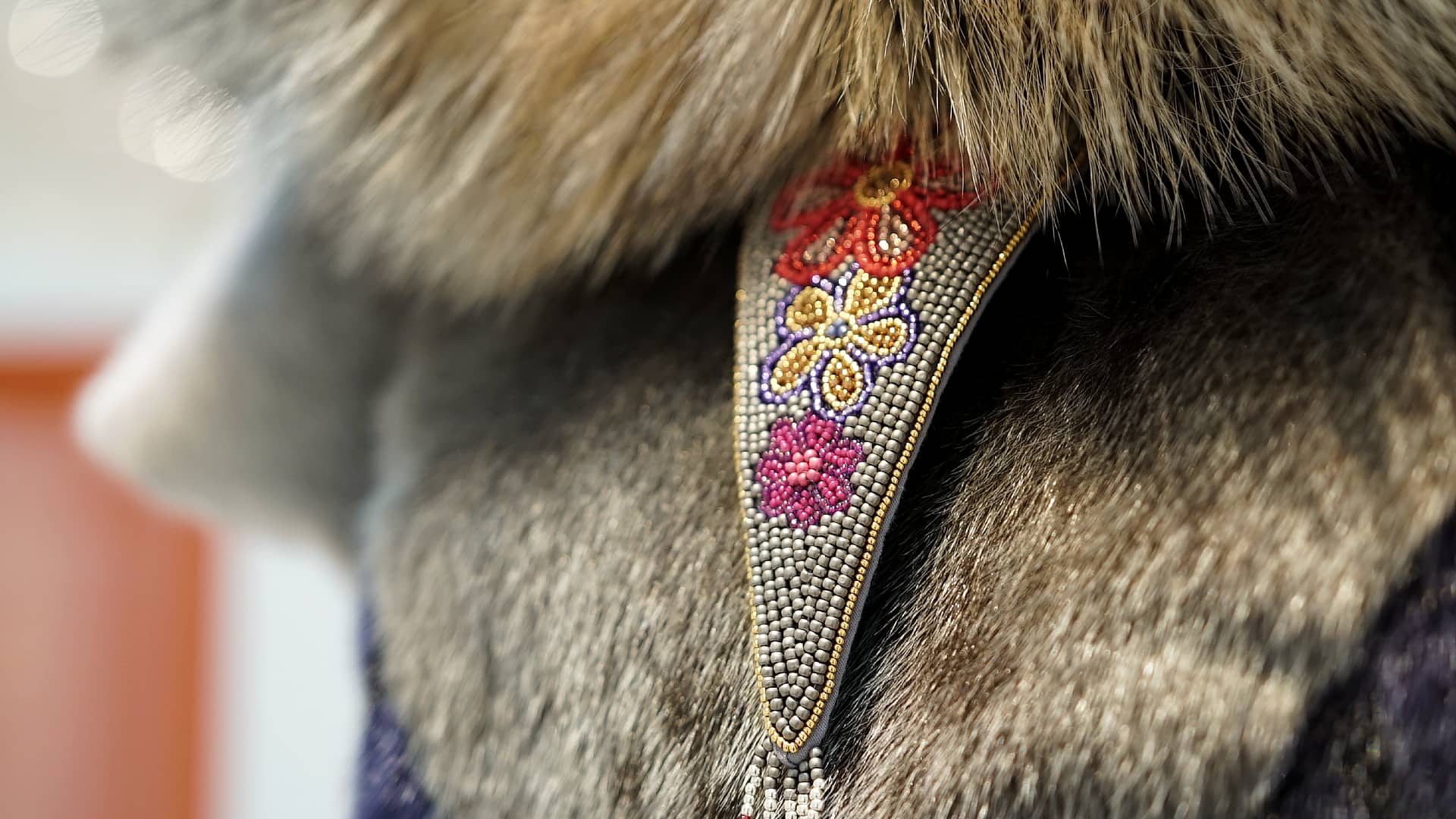 Artists create fashion-forward arnauti using a sealskin and other traditional materials they say were important to showcase in the design. 2:01

It was important for them to use materials that are important to everyday life in the North.

“There’s a lot more to that sealskin than what meets the eye,” said Genier. “I really hope that people get that message and that they take the time to listen to the story that goes behind all of this.”

Couzyn van Heuvelen is based in Bowmanville, Ont., but the Inuk artist originally hails from Iqaluit, Nunavut.

Being cooped up during the pandemic made van Heuvelen more concerned about comfort. 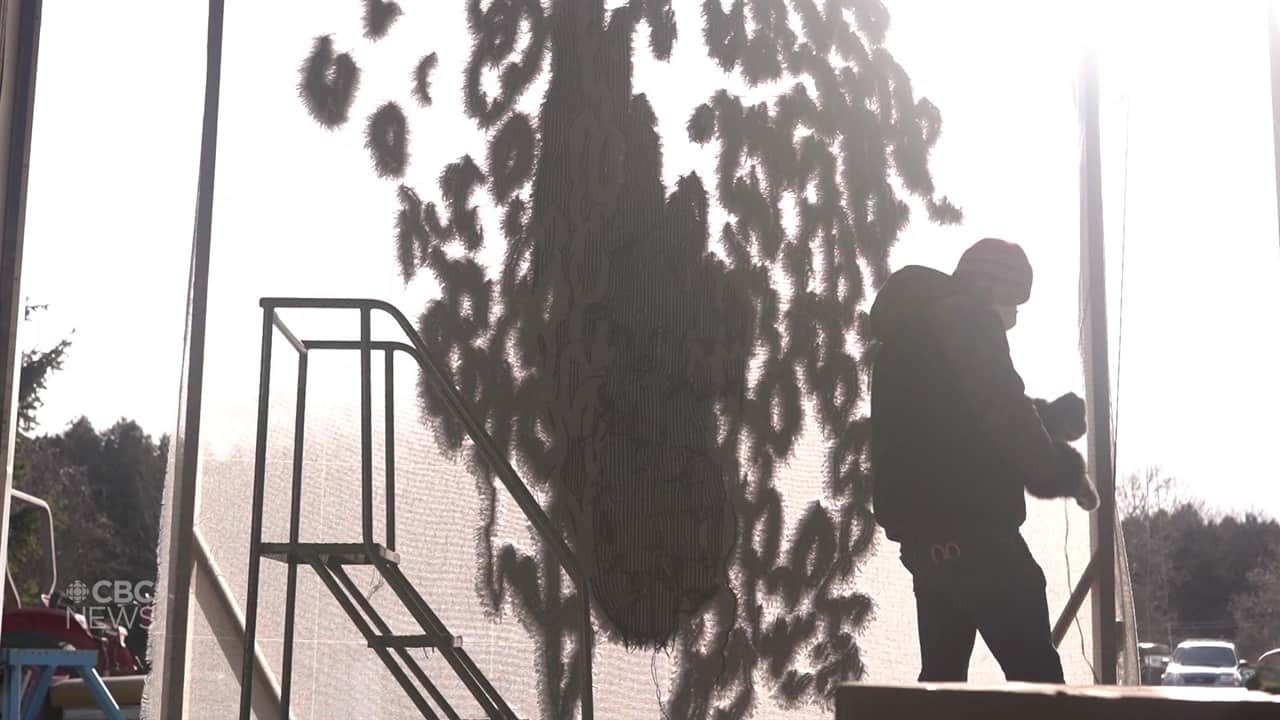 Couzyn van Heuvelen has created a giant replica sealskin rug for the Winnipeg opening of Qaumajuq. 1:45

“This piece reminds me a lot of home,” he said. “It does remind me of stories that I’ve heard of very large sea creatures.”

For three decades, the Canadian government implemented what’s known as the Inuit disc number system. It erased the names of Inuit that held honour and meaning.

“I was never known as Bill Nasogaluak. I was known as W3-1258, according to our government,” he said. “We were faceless, just a number.”

The “W” indicated he was from the Western Arctic, Nasogaluak explains, and the number “3” represented his region. The number 1258 was his individual identifier.

WATCH | ‘Not a happy story … a story that needs to be told’:

Decades ago, the federal government issued Bill Nasogaluak the number W3-1258 as part of its Inuit disc number system. The Inuvialuk artist revisited that painful past in a new work for the opening of Qaumajuq in Winnipeg. 1:37

His sculpture marks that painful history and will be on display at Qaumajuq.

“It’s not a happy story, but it’s still a story that needs to be told.”

‘The good and the bad’

Maya Sialuk Jacobsen’s work in Qaumajuq draws on the history of Christianity and colonization.

Each person depicted in her four portraits has a halo, meant to resemble the imagery of saints in the Christian church, said Jacobsen. They’re shown along with a variety of wild creatures and symbols that represent “the old culture,” she said.

“We can talk about Christianity and what it has done and the damage it has done, but the fact is that in Greenland, the majority of people feel great ownership in the church and it has preserved our language.”

WATCH | ‘You have to tell both sides of the story’: 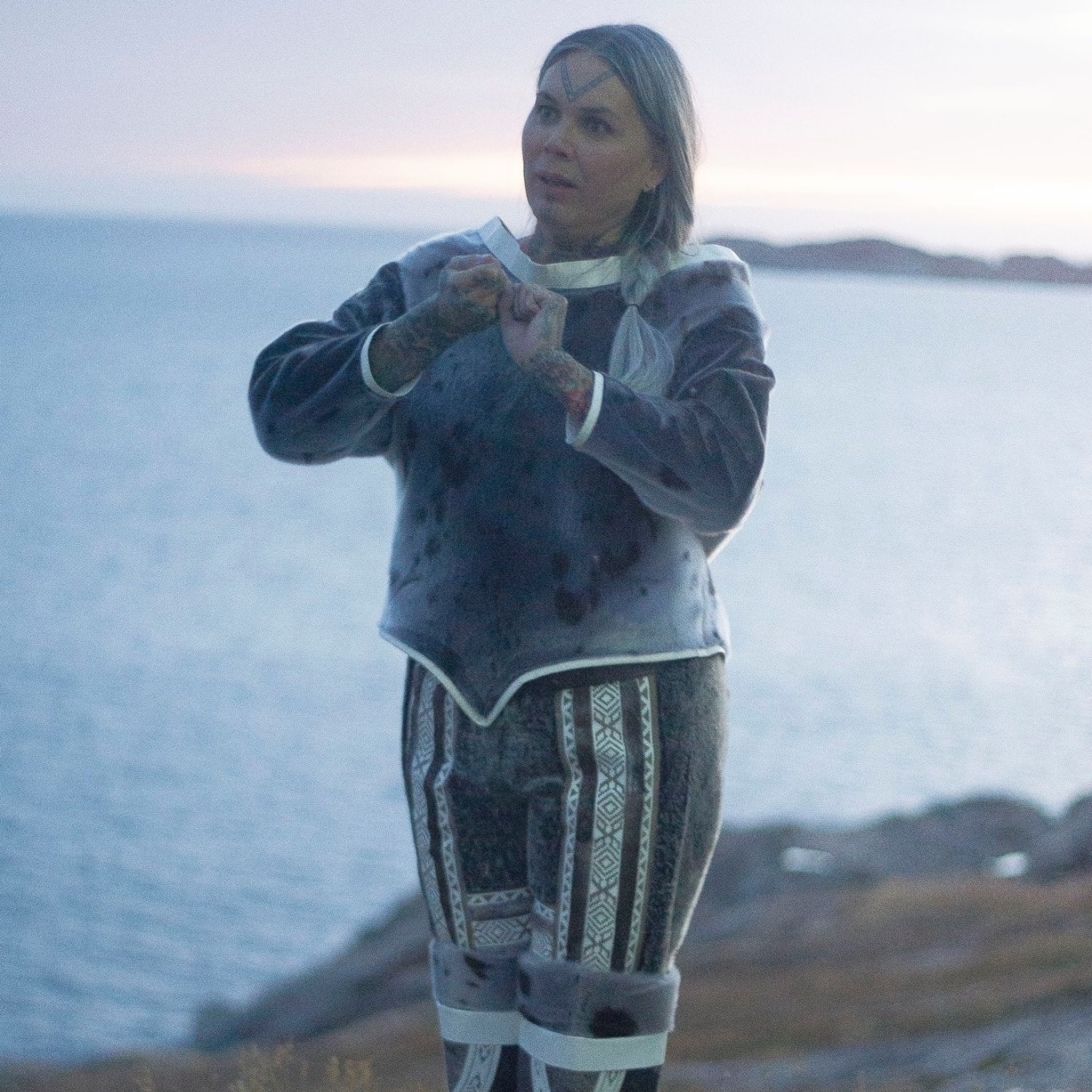 Maya Sialuk Jacobsen’s series of portraits for the opening of Qaumajuq explore the difficult history and complicated modern-day relationship between the church and people of Greenland. 2:42

One of the first things visitors see as they enter Qaumajuq’s main gallery space on the third floor is a cabin created by Zach Kunuk.

Four big-screen TVs hang on each wall, playing a slice of life from modern day Igloolik, Nunavut — Kunuk’s home, where the filmmaker’s career took off in the 1980s.

Videos in the cottage show everything from camping and hunting to families gathering inside homes.

That is contrasted with video from a hearing focused on the Mary River mine expansion in Nunavut — the largest resource development project currently being proposed in the territory.

WATCH | ‘This world as it is happening now’: 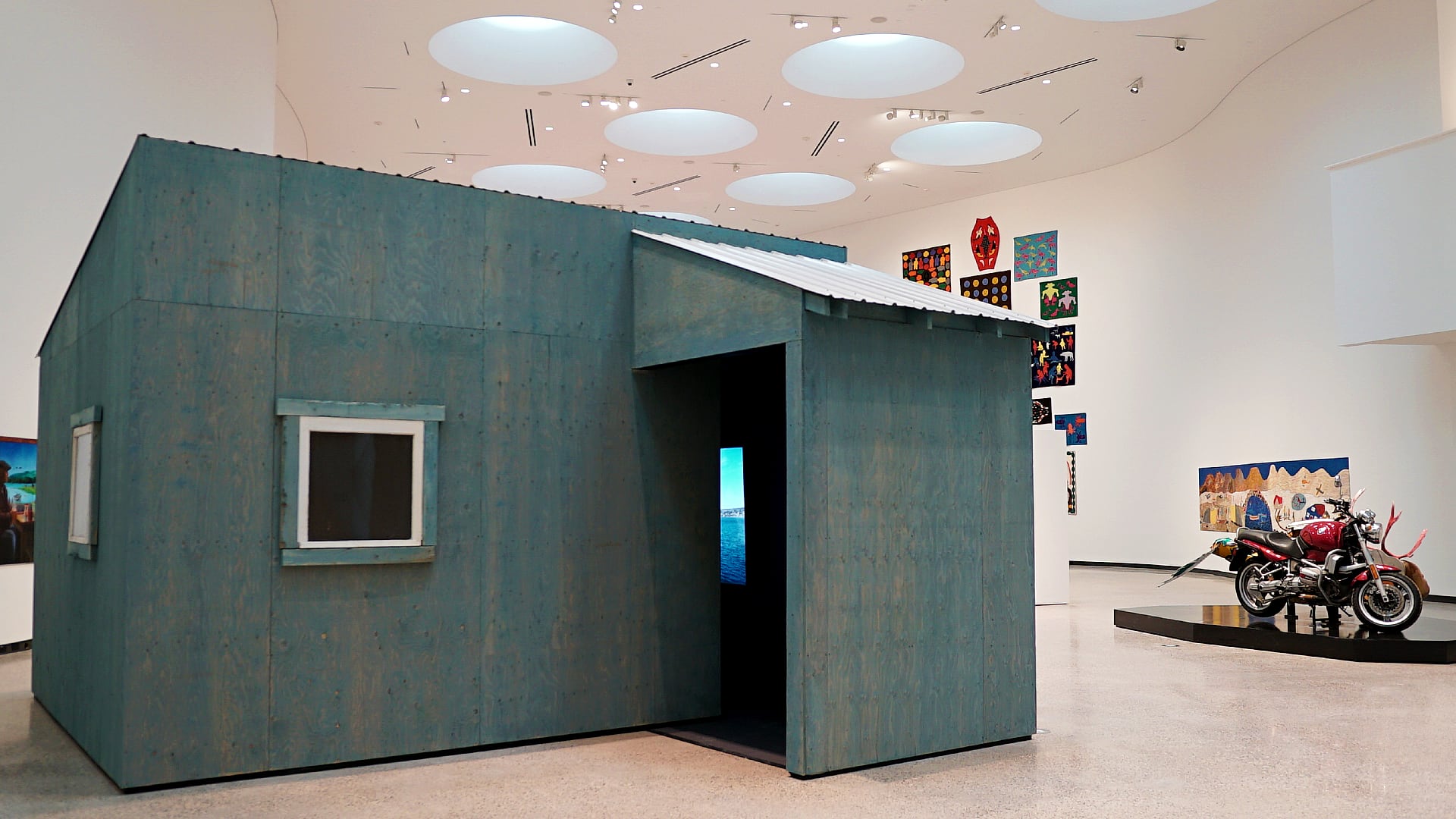 Inuk producer and director Zach Kunuk created a cabin in a gallery space at Qaumajuq, with televisions on the walls showing contrasting views of life in Igloolik. 2:45

“A giant mining company is moving to our area,” says Kunuk. “‘Comes to our area, demands, ‘My way or the highway.’ What about the animals we eat? This installation is about this world as it is happening now.”

An array of yellow, orange and red flowers flow down a dress. Each petal of Maata Kyak’s floral creation is a piece of dyed sealskin encircling a bead or pearl at the centre of her wearable art. 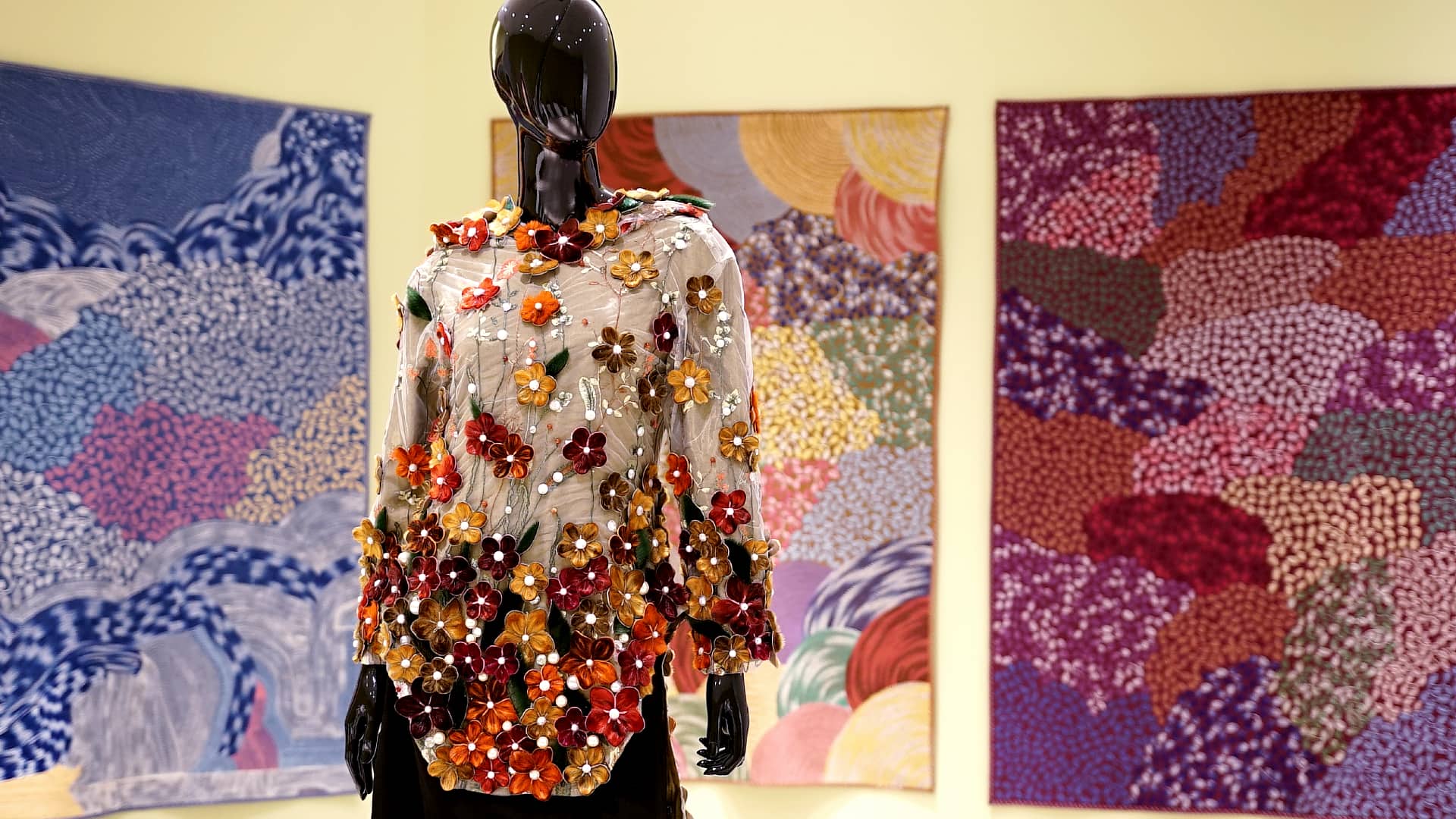 Maata Kyak created a flowing, floral dress for Qaumajuq’s opening exhibit, INUA. The colourful flowers that adorn the dress are made of sealskin and held together by beads and pearls. 1:41

The dress is meant to represent the “flourishing” Inuit culture, says Kyak.

“I was trying to make it into a tundra look,” the artist from Pond Inlet, Nunavut, said. “It’s growing, it’s blooming. That’s what it represents.”

Jacque moved away from Postville, Nunatsiavut, to work at Newfoundland and Labrador’s massive Muskrat Falls hydroelectric project — a controversial project that is now billions over budget and years behind schedule.

WATCH | Pulled in both directions: 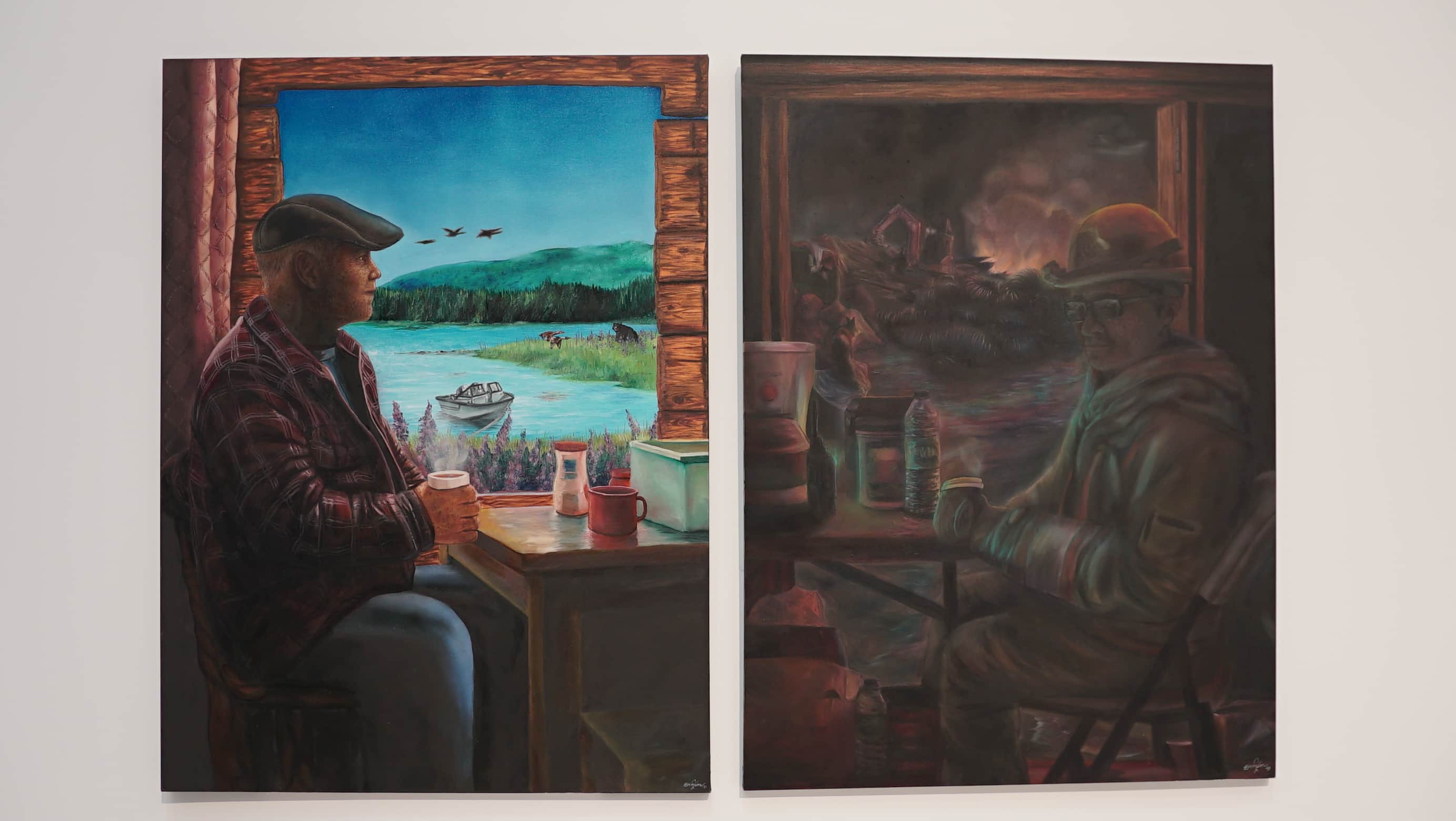 Artist Bronson Jacque’s painting for Qaumajuq’s opening shows an internal struggle he experienced while working on a hydroelectric dam project that some in his home community opposed. 2:55

Jacque explored that tension through a side-by-side piece: on one end is a self-portrait, where he looks down pensively, with dam construction in the background. On the other is his father, looking out across a wild landscape.

“Working in Muskrat Falls was an example of people having to do things that they didn’t want to do to provide for their families and get ahead in life,” said Jacque.

“As an Indigenous person — as an Inuit person — seeing the land you value being torn apart is a tough thing, especially for people who spend most of their life on the land and respecting it.”