Sergio Garcia rushed to the first tee and raced to the finish line Thursday in The Players Championship.

Most importantly, he avoided the kind of wreck that allowed the TPC Sawgrass to live up to its reputation as the course where anything can happen to anyone at any time.

Garcia thought he had plenty of time to get from the range to the 10th tee to start his round. The sun was in his eyes when he looked at the clock, he wasn’t sure what he saw, jogged the rest of the way and had a minute to spare. Then he fired off a 7-under 65, capped off by a birdie-birdie-eagle finish for a two-shot lead over Brian Harman.

It was a solid day that became brilliant over the final three holes.

Garcia only had to look next to him to see what kind of damage the Stadium Course inflicted, even on a pristine day of pleasant sunshine and a mild breeze.

Rory McIlroy, the defending champion, opened with a double bogey from the trees. He hit two in the water on the 18th and made a quadruple-bogey 8. He wound up with a 79, his worst score since his opening round at Royal Portrush in the 2019 British Open.

When darkness brought the first round to a halt — 21 players didn’t finish — there already were 13 scores of 80 or higher. That included Henrik Stenson with an 85, his highest score ever on the PGA Tour.

There were 22 scores of triple bogey or worse.

WATCH | The impact of the Canadian Open cancellation: 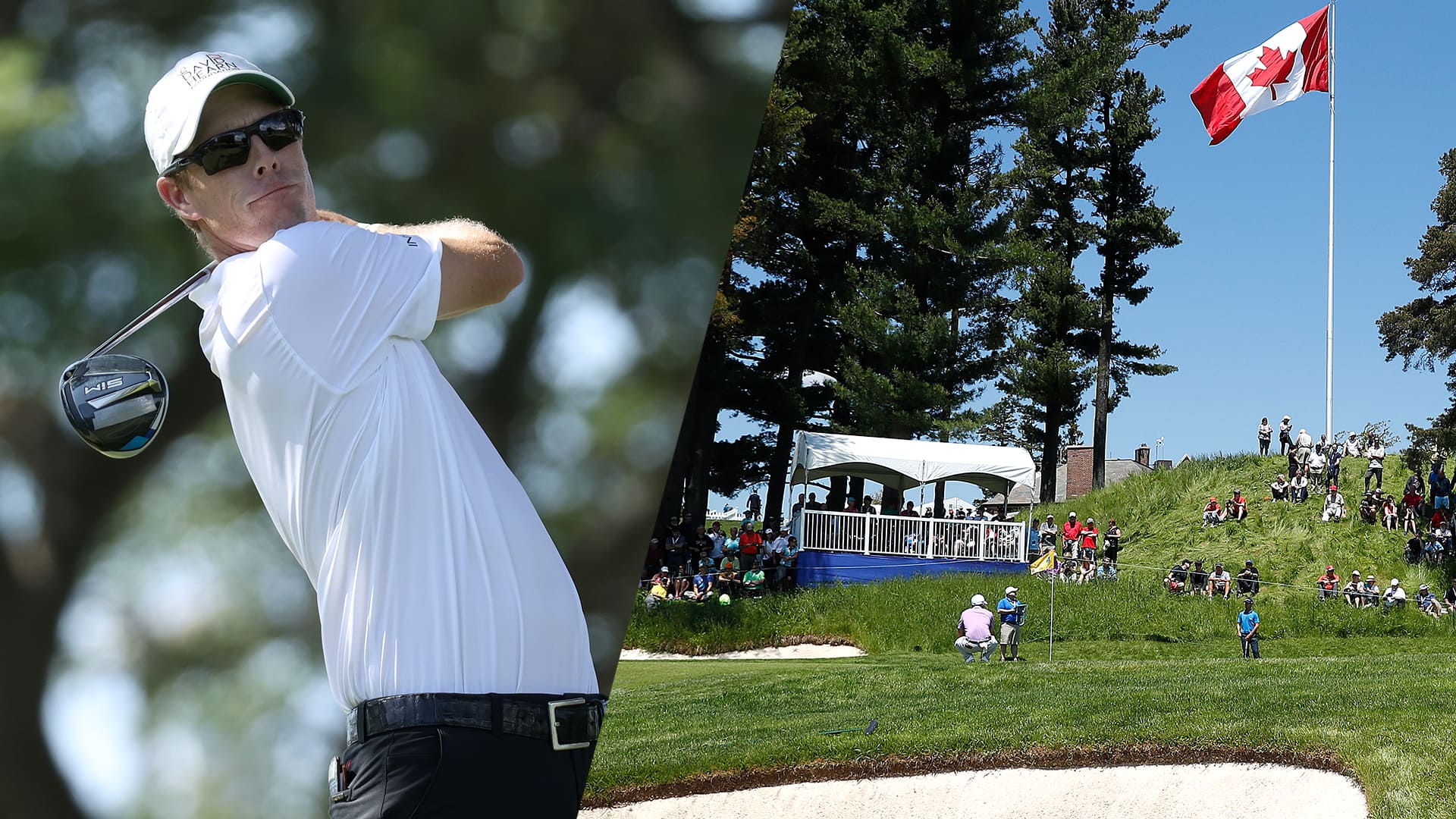 The Canadian PGA stop is cancelled for the second straight year, so Adam Stanley dives deeper into those repercussions and whether the 2021 CP Women’s Open will meet the same fate. 5:19

The Spaniard feels comfortable on a course that causes anxiety even in good weather.

“For some reason, it just kind of fits my eye,” said Garcia, who won The Players in 2008 and has twice been runner-up. “I see what I want to do pretty much every hole, and then it’s a matter of doing it.”

Harman played in the afternoon and was hanging around par until he began the back nine with three straight birdies, shot 31 on the back and wound up with a 67.

British Open champion Shane Lowry took bogey on his final hole for a 68 and was tied with Corey Conners of Listowel, Ont., and Matt Fitzpatrick. Bryson DeChambeau, coming off his victory last week at Bay Hill, had to take a little off his driver on the par-5 16th and had 9-iron left, setting up a birdie-birdie-par finish to join the group at 69.

The small number of fans — by Sawgrass standards — saw a little bit of everything.

It started early with McIlroy, who shot 43 on his opening nine holes.

“The big number on 18 didn’t help and then doubling the first wasn’t helpful, either,” he said. “It’s hard to recover when you just haven’t played good. If you take that 18th hole out, it still wasn’t a very good day.”

Stenson hit into the water on consecutive holes for a double bogey and a triple bogey. He put two more in the water, including one of 18 balls in the water on the island-green 17th.

Three of those belonged to Kevin Na, who made an 8 and then withdrew after signing for an 81.

Ian Poulter (77) sat for lunch with McIlroy, Stenson and Tyrrell Hatton (76) and posted video of this fearsome foursome that combined to go 29-over par. “Oh, what a bunch of muppets,” Poulter said.

Rickie Fowler had three double bogeys in his round of 77, leaving him in danger of missing the cut and likely missing out on the Dell Match Play in two weeks.

Dustin Johnson took double bogey on the par-5 11th and eagle on the par-5 16th in his round of 73. Jordan Spieth missed only two fairways and had to settle for a 70.

Nick Taylor of Abbotsford, B.C., (70) was 2 under, while Mackenzie Hughes of Dundas, Ont., (75) is 3 over. Abbotsford’s Adam Hadwin was even through 15 holes when play was halted.

Garcia’s lone bogey came after perhaps his best shot. From the pine straw next to a tree left of the first fairway, he hooded an iron that came out low and right to left with enough run that it settled 25 feet away. And then he three-putted.

The most remarkable round might have belonged to Hoge, who managed to get through 18 holes without a bogey.

“It was a good, solid day, kind of what you want here on the Stadium Course,” Hoge said. “I haven’t been hitting it that well coming in here, so I just tried to hit a lot of greens and stay out of trouble for the most part.”

Sebastian Munoz was at 4 under with one hole to play, that being the 18th, and a shot into the water led to a triple bogey for a 71. He tried to take out the positives of five birdies, and that’s what makes this tournament so tough to predict. There are plenty of birdies available. It doesn’t take much to erase all the good work.

“You do have a lot of wedges in your hand,” Munoz said. “Par 5s are reachable. So yeah, we do have a lot more chances than a usual course. But I mean, danger is around the corner on every hole.”