Brazil’s Lula cleared to run again: Can he write a new chapter? 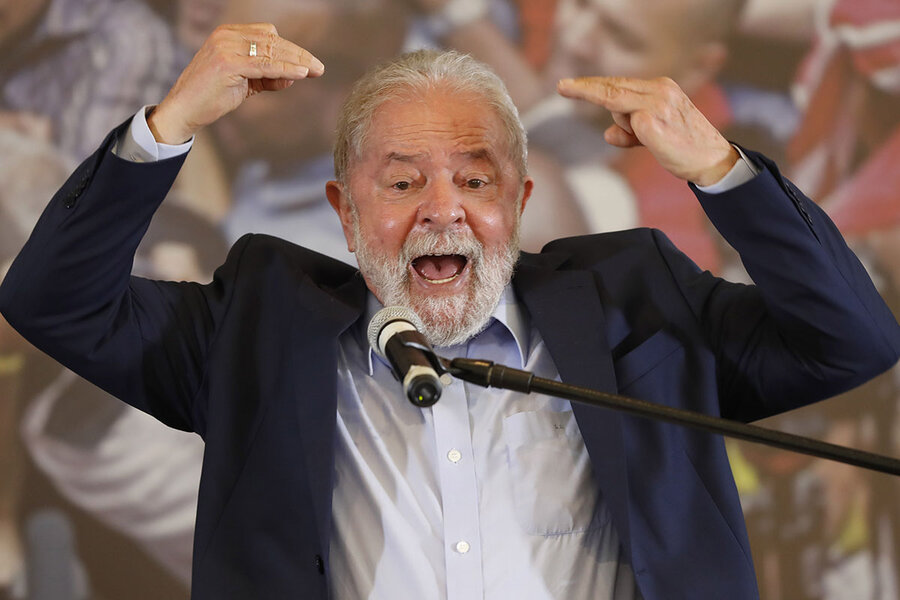 For many Brazilians, the memory of former President Luiz Inácio Lula da Silva is a rosy one: During his party’s 14 years in office, a booming economy helped fund social programs and raised millions out of poverty.

“The Lula era was great for me,” says Milena Fernandes, a teacher who moved out of poverty, in part due to opportunities offered by Lula’s administration. Yet she has reservations about his possible return to office, now that Brazil’s Supreme Court released him from prison, where he’d been held on corruption charges. Her uncertainty is not so much about Lula as an individual, but because the country seems ready for a fresh start. “I would really like to see a political renewal, a Brazil that’s moving forward,” she says.

The pandemic will influence politics for years to come. Some voters are looking to replace leaders they blame for mismanagement, but new candidates also need a vision for post-pandemic life. Brazil is an especially dramatic example.

Lula’s return to the political stage comes at a grim moment, with COVID-19 claiming some 285,000 Brazilian lives. But Lula will have to do more than pledge he’ll deal with the pandemic differently than current President Jair Bolsonaro. Some wonder whether he can craft a compelling vision for post-pandemic Brazil.

“We as a country are in a deep hole right now,” Ms. Fernandes says. “I want to see a plan for how we will move forward.”

“I was a poor kid, who studied and worked my way up,” says Ms. Fernandes, who grew up in a far-flung suburb in Rio de Janeiro’s North Zone and now works at a nonprofit’s school in the Tabajaras favela. “The Lula era was great for me. I had good opportunities.”

But Ms. Fernandes has mixed feelings about the prospect of a political comeback by Lula, as the former president is popularly known, now that a judge has scrapped corruption convictions that barred him from politics. “I don’t have a bone to pick with Lula – it was the best government we’ve had until now,” Ms. Fernandes says. “But I would really like to see a political renewal, a Brazil that’s moving forward.”

The pandemic will influence politics for years to come. Some voters are looking to replace leaders they blame for mismanagement, but new candidates also need a vision for post-pandemic life. Brazil is an especially dramatic example.

While last week’s Supreme Court decision does not absolve Lula of the corruption charges, it has restored his political rights and fueled hopes among supporters that he may now challenge far-right President Jair Bolsonaro in next year’s presidential elections.

Even in the midst of corruption scandals, Lula, who entered office in 2003, has remained a divisive but still wildly popular figure in Brazil. A poll just days before the decision to annul his convictions signaled that half of voters said they would or could cast a ballot for him in 2022, compared with just 38% who would or could back Mr. Bolsonaro.

“Lula is the only political figure that has the strength to dispute the elections with Bolsonaro today,” says Lincoln Secco, a professor at the University of São Paulo, who has written extensively about Lula and his leftist Workers’ Party (PT). “And he stands a good chance.”

Lula’s return to the political stage comes at a grim moment for Brazil. Mr. Bolsonaro has presided over one of the world’s worst outbreaks of COVID-19, which has so far killed 285,000 Brazilians. The populist leader’s denialist response to the crisis – including his rejection of lockdowns, masks, and until recently, vaccines – has spurred calls for his impeachment and left many Brazilians starved for a political alternative.

But Lula will still have to win over the many Brazilians who grew disillusioned with the PT during its 14 years in power, as a deep economic recession and a far-reaching corruption scandal broke the party’s spell and tainted its image. With the PT’s golden years long behind it, some wonder whether Lula can craft a compelling vision for post-pandemic Brazil.

And while Ms. Fernandes still sees Lula as the politician best prepared to return Brazil to progress, she says he will need to offer much more than nostalgia for the past – or a promise that he’s different than the incumbent – to reach the presidency again.

“We as a country are in a deep hole right now,” she says. “I want to see a plan for how we will move forward.”

Fueled by a commodity boom, Lula’s two terms in office were marked by rapid economic expansion, plunging unemployment, and heady optimism for the future. Some 36 million Brazilians climbed out of extreme poverty, partially thanks to social policies championed by Lula and the PT.

“All of this turned Lula into a very powerful figure, with a loyal base in the lowest income groups,” says Antonio Lavareda, a political scientist and professor at the Federal University of Pernambuco in Brazil’s northeast. “It’s because of this legacy that Lula still has political strength.”

But the tide turned against the PT as Brazil sank into economic recession and a sprawling corruption scandal implicated dozens of the country’s business and political elite. Lula’s plans to run for a third term in 2018 were derailed when he was jailed on disputed corruption charges, clearing the way for a landmark victory by Mr. Bolsonaro, a retired military officer.

Yet observers say the anti-PT wave that lifted Mr. Bolsonaro to power is now subsiding, creating an opportunity for Lula. This is mostly thanks to the unravelling of Brazil’s vast corruption investigation – known as Operation Car Wash, or Lava Jato – amid allegations of foul play and political vendettas.

“Lava Jato lost its prestige, its credibility,” Mr. Secco says. “With all these revelations, it became clear it was acting like a type of political tool. And this is helping Lula.” Mr. Bolsonaro’s own family has also become embroiled in corruption allegations, undermining his self-made image as a crusader against kickbacks and graft.

Lula also has the advantage of not being at the helm during the worst public health disaster in Brazil’s history. A poll this week showed 54% of Brazilians see Mr. Bolsonaro’s handling of the pandemic as bad or terrible.

Mr. Bolsonaro’s broader performance has also left many wanting more. In 2018, he lured centrist voters with promises to put the economy back on a path toward growth. But the pandemic has dealt a painful economic blow and deepened unemployment. Creeping inflation has sent prices of basic staples like rice soaring, leaving millions of Brazilians struggling to put food on the table.

“Bolsonaro was elected with a certain vision for the economy,” says Maria do Socorro Sousa Braga, a political scientist and professor at the Federal University of São Carlos. “Part of the electorate sees that he’s not able to deliver and it’s looking for an alternative.”

Mr. Bolsonaro was able to keep growing discontent at bay last year, thanks to a generous emergency cash voucher for those worst hit by the pandemic. But his popularity has plummeted as the program was replaced by a new, far more modest one. A recent poll shows 63% of Brazilians believe he is leading the economy in the wrong direction. Ms. Braga says winning over this centrist voter concerned with the economy will be key for Lula.

“I believed in Bolsonaro, along with the majority of Brazil,” says Gilberto Zumbiachi, an electrician who lives in the coastal city of Florianópolis. “He promised many things – but he didn’t follow through.”

Now, Mr. Zumbiachi says it’s time for a political shake-up, and he sees Lula as a welcome alternative in the next elections. “The Workers’ Party brought a lot of good to Brazil; it cared about the population. It’s become clear that the current government doesn’t care about the people.”

Still, rejection of Lula remains strong among many Brazilians, as the PT has struggled to reinvent itself in the aftermath of corruption scandals. The party posted only a slight recovery in last year’s municipal elections, signaling it has not repaired its image yet, says Mr. Lavareda.

For Antoni Wroblewski, an art teacher in the southern city of Curitiba, the PT is stale and worn out. “It should wake up and talk to society about what it needs, like it did in the past,” he says.

Mr. Secco, the historian, agrees, noting the key to winning back the skeptical and disillusioned voter lies in offering a compelling vision for Brazil beyond the pandemic, as the country grapples with economic pain, a battered health system, and an uncertain future.

“Lula has a legacy and a memory that guarantees him support in one part of the population. But he also needs to bring a new message for everyone else. And so far, nobody is offering a plan for the future – neither the right nor the left.”

Be more Alice! The fictional characters with lessons for lockdown | Books