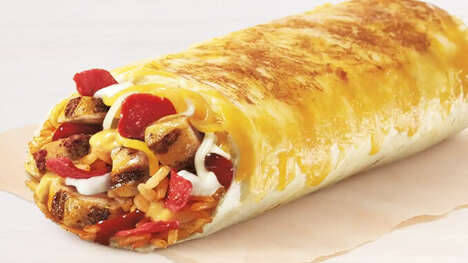 Taco Bell is currently testing a new Chicken Enchilada Grilled Cheese Burrito at select locations in the Cleveland, Ohio area. This culinary mashup is a cross between several different dishes and contains grilled white-meat chicken, seasoned rice, Taco Bell’s signature three-cheese blend, crunchy red tortilla strips, enchilada sauce, and reduced-fat sour cream. The whole thing is then wrapped up in a flour tortilla with even more blend grilled on the outside. The result is a saucy and cheesy creation, with all your favorite burrito fillings.