The Chinese government wants Alibaba Group Holding Ltd. to sell some of its media assets, including the South China Morning Post, because of growing concerns about the technology giant’s influence over public opinion in the country, according to a person familiar with the matter.

Beijing expressed misgivings about Alibaba’s media holdings during several meetings dating to last year, said the person, asking not to be identified because the discussions are private. Government officials are particularly upset about the company’s influence over social media in China and its role in an online scandal, involving one of its executives.

Jack Ma, Alibaba’s co-founder, has been at the center of a government crackdown that began last year, targeting the e-commerce giant and its finance affiliate Ant Group Co. The Wall Street Journal reported earlier that China’s government is asking Alibaba to shed media properties.

Ma and Alibaba quietly built up a sprawling portfolio of media assets over the years, spanning BuzzFeed-style online outlets, newspapers, television-production companies, social-media and advertising assets. Alibaba has a major stake in the Twitter-like Weibo, as well as other online and print news outlets, including the SCMP, the leading English-language newspaper in Hong Kong.

The discussion about selling the newspaper began last year, the person said. While no specific buyer has been identified, it is expected to be a Chinese entity.

Bloomberg News reported in February that Beijing had grown alarmed about Alibaba’s media holdings after a scandal involving Jiang Fan, then the youngest partner at the e-commerce company. Posts about the scandal began disappearing from social media, including Weibo, drawing the ire of government officials.

China’s internet watchdog penalized the microblogging site for interfering with the spread of opinions. The scale and speed with which the website removed posts rankled government officials, who saw it as crossing a line, a person familiar with the matter said at the time.

“The country must pay attention to and crack down on this, because the power of capital can be used by us but also the enemy,” wrote Chinese commentator Song Qinghui, who contributes editorials to publications including state-backed media.

Regulators were shocked at the extent of the company’s media interests after reviewing its holdings and asked it to come up with a plan to substantially curtail the interests, the Journal reported, citing people familiar with the discussions.

Beijing is concerned that Alibaba could use its media assets as a tool to control public opinion, creating a “vicious circle,” the person said. Already, the company’s media has played a role in influencing the general public’s view about the emerging fintech sector, the person said. 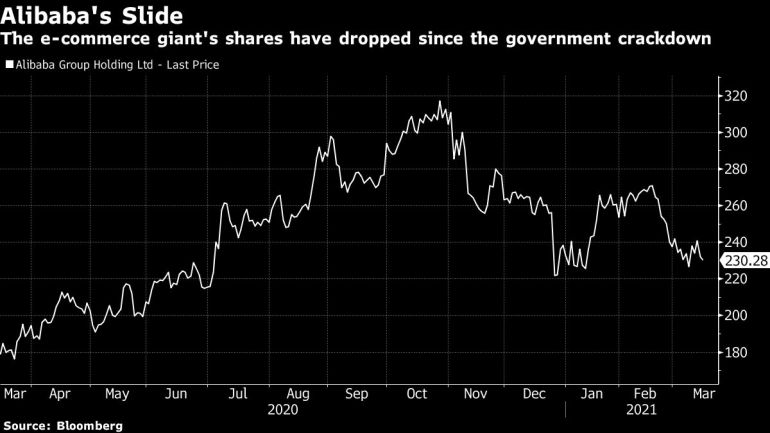 The expansive influence is seen as posing serious challenges to the Chinese Communist Party and its powerful propaganda apparatus, the Journal said.

Representatives for Alibaba in China and the U.S. didn’t respond to requests for comment.

Ma is revered in China as one of the country’s most-successful entrepreneurs. But his fortunes have waned since he spoke out against China’s regulatory approach to the finance sector.

Those comments set in motion an unprecedented regulatory offensive, including scuttling plans for Ant’s $35 billion initial public offering and opening an antitrust probe into Alibaba. His media holdings could prove even more problematic.

China’s campaign to curb the influence of its technology moguls expanded last week with fines against Pony Ma’s conglomerate Tencent Holdings Ltd. Top financial regulators see Tencent as the next target for increased supervision after the clamp down on Ant, Bloomberg reported.

It isn’t clear whether Alibaba will need to sell all of its media assets, the Journal reported. Any plan that Alibaba comes up with will need approval from China’s senior leadership, according to the newspaper.