The Ganassi car had exchanged the lead with the Daytona 24 Hours-winning Wayne Taylor Racing Acura for much of the opening phase of the race, following a controversial clash between van der Zande and the pole-sitting Action Express Racing Cadillac of Pipo Derani that cost the latter three laps of repairs.

No further action was taken following the incident, a verdict neither side agreed with.

WTR driver Ricky Taylor passed CGR’s Kevin Magnussen in traffic before the respective crews handed over to Filipe Albuerque and Scott Dixon before the three-hour mark, with Simon Pagenaud in the second AXR Cadillac – which he’d taken over from Jimmie Johnson – moving ahead of Juan Pablo Montoya’s Meyer Shank Racing Acura.

Following a full course yellow at the start of the fourth hour, Pagenaud headed the field with defending Sebring winner Harry Tincknell’s sole Mazda RT24-P, Albuquerque and Dixon giving chase. Montoya soon moved into third, which became second when Pagenaud made his delayed fifth scheduled stop to hand over to Kamui Kobayashi.

WTR’s race took a turn for the worse when a freshly inserted Alexander Rossi was waved out while the fuel hose wasn’t fully clear. Rossi braked immediately, but was handed a drive-through penalty.

During the same pit cycle, a speedy Ganassi pitstop got Dixon out ahead of Montoya, leaving Dixon to chase after Tincknell for a net lead, with Kobayashi ahead of them but running off-sequence.

They pitted nose-to-tail to hand over to their co-drivers, whereupon departing van der Zande immediately moved ahead of Jarvis. At half-distance, the Dutchman’s advantage had stretched to 22s, with Jarvis in turn 8s ahead of MSR Acura driver Olivier Pla and Rossi.

Antonio Garcia led the GTLM class in the #3 Corvette Racing C8.R at half-distance, although its sister car is two laps in arrears after a drive-through penalty for Tommy Milner changing lanes at the start was followed by technical issues that required an electronic reset. 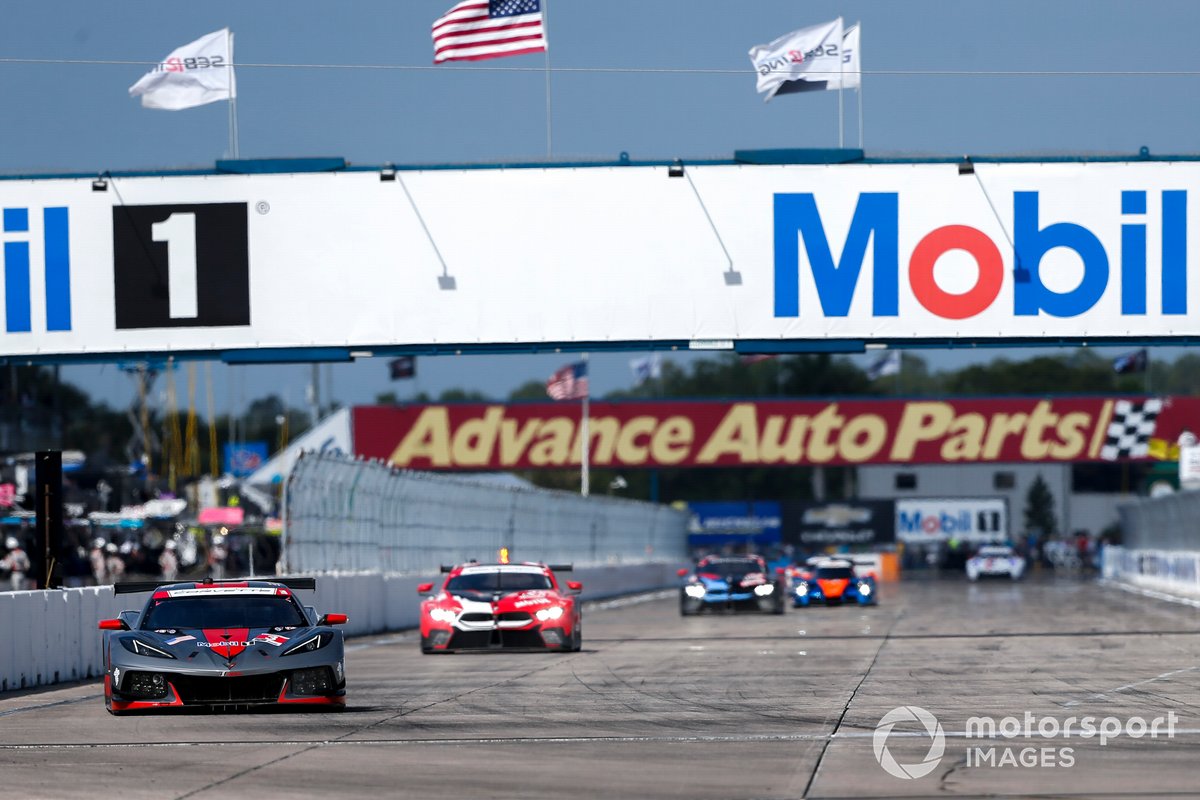 Bruno Spengler’s #25 BMW M8 had taken the lead from Garcia’s team-mate Jordan Taylor after a caution period, but under green Taylor remained in pursuit and when Garcia took over at the next pitstop the Spaniard was back ahead of the BMW that was taken over by Philipp Eng.

Behind the #25 BMW that currently has Connor De Phillippi at the wheel, the #24 BMW of John Edwards runs third after team-mate Jesse Krohn was hit with a drive-through penalty for shoving a GTD Porsche off the track on a straight.

Wright Motorsport’s Porsche led the GTD class at half distance with Trent Hindman at the wheel, but is 10 laps off sequence from the Pfaff Porsche now driven by Lars Kern. The two 911 GT3-Rs enjoyed an entertaining scrap with Jan Heylen chasing factory driver Laurens Vanthoor. Hindman then took the lead when Vanthoor handed over to Zacharie Robichon.

Ross Gunn sits third in the Heart of Racing Aston Martin ahead of the #12 Vasser Sullivan Lexus driven by Robert Megnnis and the Paul Miller Racing Lamborghini of Bryan Sellers, which lost time when Corey Lewis had a Turn 17 collision with the lapped Team Hardpoint EBM Porsche 911 GT3R of Earl Bamber.

Two more strong GTD challengers were removed from contention when factory Lamborghini driver Franck Perera lost control of his GRT Grasser entry under braking at Turn 3, launched over a kerb and took himself and Billy Johnson’s Alegra Motorsports Mercedes hard into the tirewall.

Indian sailors are being caught in a piracy boom off West Africa. One captain held ho…