Frozen frogs, a butt-breather and a seasonal genius: How…

Conservative delegates at the party’s policy convention have voted to reject adding green-friendly statements to the policy book — including a line that would have stated the party believes “climate change is real” and is “willing to act.”

The Portneuf—Jacques—Cartier riding in Quebec, which proposed the policy change, also asked delegates to recognize that “Canadian businesses classified as highly polluting need to take more responsibility” and “reduce their GHG emissions.”

The policy proposal also included a call to support “innovation in green technologies” so that Canada can become “a world-class leader” in an emerging industry.

Delegates issued a rebuke to climate-minded Conservatives and rejected the policy shift by a margin of 54 per cent to 46. In fact, it was one of only four policy proposals or modifications on a list of 50 pitched by electoral riding associations (EDAs) that were voted down by the delegates.

While delegates from each of the Atlantic provinces and Quebec embraced the “climate change is real” proposal — 70 per cent of delegates from New Brunswick and Quebec were onside with it — those from every other province and the territories voted against the change.

The clear rejection came hours after Conservative Leader Erin O’Toole urged party members to embrace change or risk losing again to Prime Minister Justin Trudeau and the Liberals in the next election.

O’Toole said if party members are serious about winning, they must embrace new ideas — even if they go against party orthodoxy.

O’Toole told delegates the party “cannot ignore the reality of climate change” and that the debate “is over.”

“We must also recognize that Canadians expect us to have a real plan for the environment. We need to boldly reclaim the environment as an area where Conservatives are leaders,” he said.

O’Toole also said he doesn’t want Conservative candidates to be branded as “climate change deniers” in the next election campaign. 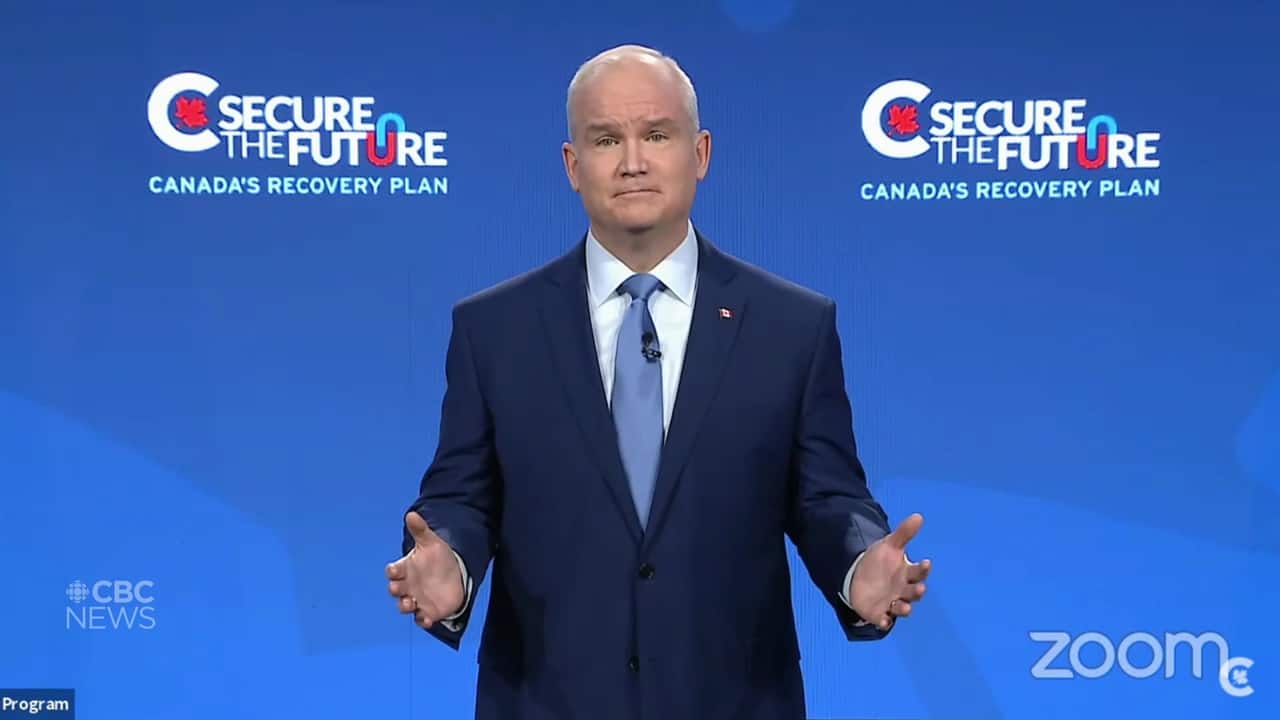 During a question-and-answer session with delegates today, O’Toole was asked about members rejecting calls for a more forceful approach to climate action.

One delegate, Moshe Appel, said the failure to adopt the policy proposal could hurt the party’s standing with voters.

O’Toole said he won’t be dissuaded from addressing the problem of climate change. “Climate change is real. We will have a serious and comprehensive plan,” he said.

“It’s important to me as a father of young children, as a member of Parliament. Fighting climate change is important to the Conservative Party.”

O’Toole did, however, vow to scrap the national carbon tax — he said it’s “unfair for working families” — while promising to make “big emitters” pay.

The party’s national campaign manager, Fred DeLorey, also tweeted that, despite the vote, “the debate is over and we need a real plan that works, not Trudeau’s carbon tax.”

While delegates rejected the “climate change is real” proposal, the “policy document already has a section on climate change,” DeLorey said. “Akin to us needing to say ‘water is wet.'”

(The policy book does state that “in order to have a strong economy and maintain good health, Canada must have strong, coordinated and achievable environmental policies.”)

Speaking to CBC News, Appel, a resident of Vancouver Island, said that while he’s happy to hear O’Toole say he’s serious about the environment, he’s “very frustrated” and “very disappointed” with other members who wouldn’t endorse a “coherent policy.”

While he supports Canada’s “ethical oil” and some natural resource development, Appel said he thinks the world must embrace the Paris climate accord and drive down emissions to avoid catastrophic consequences.

During the Q&A, O’Toole also faced a number of questions from delegates about how a government led by him would revitalize the oil and gas sector, which has been hurt by low commodity prices and constrained pipeline capacity for the last half-decade.

“Our resource economy is the best in the world. We should be supporting it and exporting,” he said. “We need to get our resources to market.”

There was a fierce debate over the proposed green policy shift during the policy convention Friday, with a clear split in the party ranks over how far the Conservatives should go.

Some delegates embraced a shift in posture, saying they want Canada to adopt green technology while still supporting extractive industries like the oil and gas sector. Others called the proposal an unnecessary gesture to appease climate activists.

“I’m not sure why it’s necessary for the Conservative Party to declare climate change is real,” one delegate from Scarborough-Centre said.

“The way this section is worded befuddles the issue and may cost us some support. Conservatives need to lead with clarity, focus and intelligent solutions, not buzzwords.”

Another delegate, from Perth—Wellington in Ontario, said environmental policy should not be focused on driving down greenhouse gas emissions.

“It’s not the only pollutant that we have to worry about,” he said. “I’m opposed to this amendment because it unfairly centres on greenhouse gas emissions.”

Justin Jones, a resident of northeastern B.C. who also spoke in favour of the resolution during the debate, said many in the party are concerned about climate change — and this vote will only solidify the impression that all Conservatives are climate skeptics.

“I think one of the biggest misconceptions out there is that the Conservatives don’t care about the environment. I’m 30 years old, I have kids, I want the world to continue to be prosperous and the environment to not be affected,” he told CBC News — adding he supports Canadian oil and gas projects, which he said adhere to high environmental standards.

“I think the wording in that policy addition just caused a big misunderstanding. It wasn’t the greatest. It’s already evident that the party does recognize climate change.”

But he conceded the resolution vote may haunt O’Toole as he tries to shift the Conservative message on climate change.

“I believe it’s going to be a real issue any time Erin is going to speak in support of protecting our environment,” Jones said. “He’s got a battle ahead of him because, maybe, some misinterpreted or the words were taken out of context. The media focuses on the issues we’re divided on.”

Delegates also rejected a modification to the policy book that would have changed the party’s stance on medical assistance in dying — swapping the statement that the party would not support any legislation that would “legalize euthanasia or assisted suicide” for one that says it would oppose “the extension of euthanasia and assisted suicide” to minors and people living with “psychological suffering.”

This policy modification may have been rejected because delegates also voted for a similarly worded resolution that reaffirms the party “opposes euthanasia and assisted suicide” and will stand against any expansions of the current law. The federal government recently extended access to medical assistance in dying with Bill C-7.

Delegates also voted down proposals that would have scrubbed a Conservative policy position backing a national missing persons’ registry.

They also voted to maintain their stance on section 13 of the Canadian Human Rights Act.

That section — which is no longer in force, having been repealed by a Conservative private member’s bill in 2014 — prohibited online communications which were “likely to expose a person or persons to hatred or contempt” on the basis of a prohibited ground of discrimination, such as race, national or ethic origin, colour or religion. Complainants could bring their cases to the Canadian Human Rights Commission.

This section of the act was loathed by free speech advocates, who said it went too far in policing online content.

Walied Soliman — O’Toole’s fundraising director in the leadership race and chair of Norton Rose Fulbright, one of the country’s largest law firms — said Saturday the party needs to grow its base and “speak to more Canadians” if it wants to win the next election. He said the membership needs to hear O’Toole’s call for renewal.

Soliman said the party can only win if it recaptures crucial battleground ridings like those in the suburbs around Toronto — and O’Toole’s call for a policy shift will help in that effort.

“That doesn’t mean we dilute who we are — we should never do that,” he said. “Our membership has to listen to Erin’s speech over and over again and realize we have to grow this tent.”

Help! Will All My Travel Vouchers Expire Before I Can Use Them?

With Terence Dickinson’s death, we’ve lost one of Canada’s most…