Coronavirus: What’s happening in Canada and around the world on Monday

Nearly four million doses of the newest coronavirus vaccine available to people in the U.S. are being delivered to states for injections starting on Tuesday.

The White House said the entire stockpile of the newly approved single-dose Johnson & Johnson vaccine will go out immediately. J&J will deliver about 16 million more doses by the end of March and 100 million total by the end of June, but the distribution would be backloaded.

Though the new shot is easier to administer and requires only one dose, the administration is not altering its distribution plans.

The White House is encouraging Americans to take the first dose available to them, regardless of manufacturer.

Advisers to the U.S. Centers for Disease Control and Prevention voted overwhelmingly Sunday to recommend the vaccine for adults 18 years old and up. It adds to the vaccines from Pfizer and Moderna that were authorized in December.

“It’s really difficult to predict exactly when we might make a final decision because it really depends on that data. But we’re looking at … the next couple of weeks,” Dr. Supriya Sharma said in an interview on Rosemary Barton Live.

The two-dose vaccine from Oxford University and AstraZeneca was approved for use in Canada late last week, bringing the number of vaccines available in the country up to three.

Health Canada’s chief medical adviser, Dr. Supriya Sharma, said the agency is waiting on manufacturer data to make a determination on Johnson & Johnson’s single-dose COVID-19 vaccine, but contingent on that data, approval could come in the next few weeks. @RosieBarton pic.twitter.com/aLvpldFF1e

-From The Associated Press and CBC News, last updated at 7:25 a.m. ET

As of late last week, the Public Health Agency of Canada had reported 1,010 cases of variants of concern, including:

In Atlantic Canada, Prince Edward Island moved to close schools and ban gatherings for 72 hours as health officials try to stop the growth of two clusters of cases.

“We would rather go harder and stronger now than wait for an outbreak like we have seen in other provinces that could put us in an extended period of lockdown for weeks or even months,” Premier Dennis King said late Sunday.

Health officials in P.E.I. on Sunday reported five new cases of COVID-19, bringing the number of active cases on the island to 18.

In Newfoundland and Labrador, health officials reported seven new cases of COVID-19 on Sunday. The province, which had 10 people in hospital with COVID-19, reported 262 active cases.

Nova Scotia reported three new cases of COVID-19 on Sunday. There were no new cases reported in New Brunswick on Sunday, but the province did report its 27th death attributed to the virus.

In Quebec, health officials reported 737 new cases of COVID-19 and nine additional deaths on Sunday. Hospitalizations stood at 601, with 117 COVID-19 patients in intensive care units across the province.

Ontario, meanwhile, reported 1,062 new cases of COVID-19 on Sunday and 20 additional deaths. Hospitalizations in the province stood at 627, with 289 people in intensive care with COVID-19. 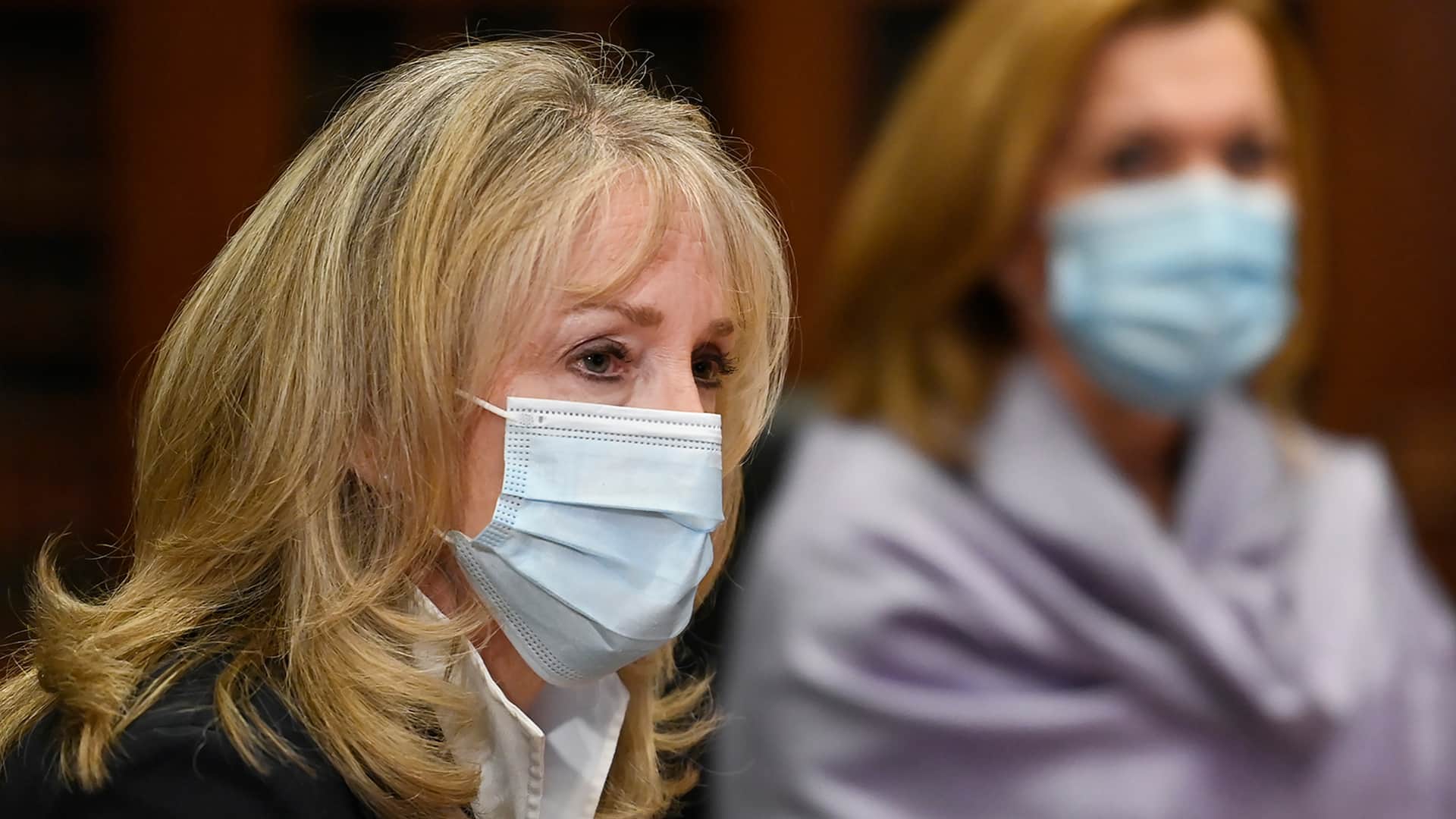 Ontario Minister of Long-Term Care Merrilee Fullerton’s testimony at a provincial commission about the COVID-19 crisis revealed a lack of planning and delayed responses, but Fullerton put the blame on community transmission. 1:54

With case numbers on the rise in some regions and amid growing worry over variants of concern, two regions — Thunder Bay and Simcoe Muskoka — were being sent back to lockdown as of Monday.

Across the North, one new case of COVID-19 was reported in Nunavut on Sunday, bringing the number of active cases in the territory to 18. Yukon and the Northwest Territories report updated figures from Monday through Friday, so there were no updates available on case numbers over the weekend.

-From The Canadian Press and CBC News, last updated at 7:15 a.m. ET

As of early Monday morning, more than 114.1 million cases of COVID-19 had been reported worldwide, with 64.4 million cases listed as recovered on a global tracking site maintained by Johns Hopkins University. The global death toll stood at more than 2.5 million.

In the Asia-Pacific region, the Philippines launched a vaccination campaign Monday but faces supply problems and public resistance, which it hopes to ease by inoculating top officials.

Cabinet officials, along with health workers and military and police personnel, were among the first to be vaccinated in six hospitals after 600,000 doses donated by China were received on Sunday.

The Philippines has reported more than 576,000 infections, including 12,318 deaths, the second-highest totals in southeast Asia after Indonesia.

Aside from China’s donated vaccine from Sinovac Biotech Ltd., the government has separately ordered 25 million doses from the China-based company but no date has been set for the deliveries. Health Secretary Francisco Duque III said the delivery of an initial 525,600 doses of AstraZeneca’s vaccine that was initially scheduled for Monday would be delayed by a week due to supply problems.

The government has been negotiating to secure at least 148 million doses from Western and Asian companies to vaccinate about 70 million Filipinos for free in a massive campaign funded by foreign and domestic loans.

In the Americas, Brazil’s capital has entered a two-week lockdown, joining several states in adopting measures to reduce the spread of COVID-19 as intensive care beds begin to fill in some important cities.

At least eight Brazilian states adopted curfews over the past week due to the rise in cases and deaths from COVID-19. Thursday was Brazil’s deadliest day since the beginning of the pandemic, with 1,541 deaths confirmed from the virus. So far more than 254,000 people have died overall.

Brasilia Gov. Ibaneis Rocha decreed the total closure of bars, restaurants, shopping malls and schools until March 15 and prohibited gatherings of people. Sale of alcoholic beverages was prohibited after 8 p.m. In the federal district, 85 per cent of hospital beds were occupied on Sunday, according to the local health ministry.

President Jair Bolsonaro again criticized such measures, saying on his Twitter account: “The people want to work.” He threatened on Friday to cut off federal emergency pandemic assistance to states resorting to lockdowns.

In Europe, health officials in Britain have identified six cases of the P1 variant — including one in a person who has not been traced. Direct flights from Brazil to the U.K. have been halted, but the newly identified cases have been linked to people who came to the U.K. from Brazil through other European cities in early February.

The arrivals came days before the U.K. imposed a 10-day hotel quarantine on people arriving from high-risk countries, including Brazil.

Three of the cases of the variant are in Scotland and two in southwest England. The sixth individual has not been identified because they did not correctly fill in a form with their contact details. Public Health England said it was working to find the person and is conducting local mass testing to see whether the variant has spread in the community.

In the Middle East, Iran has surpassed 60,000 known coronavirus-related deaths, the latest grim milestone for the hardest-hit country in the Middle East. The Health Ministry reported 93 new deaths from COVID-19 on Sunday and more than 8,000 new infections, pushing the total infection count over 1.63 million.

After more than a year of the pandemic, deaths from COVID-19 recently have declined in Iran as movement restrictions in the capital have set in, including inter-city travel bans, mask mandates and school closures.

The government on Sunday banned incoming travellers from a list of 32 countries, including Britain and other states in Africa and Latin America, due to fears of new virus variants. Over the year, Iran has struggled with surges that at times overwhelmed its health system as authorities resisted a total lockdown to salvage an economy crippled by U.S. sanctions.

South Africa remained the hardest-hit country in Africa, with more than 1.5 million reported cases of COVID-19 and nearly 50,000 deaths. With fewer new cases being reported, South Africa is easing some restrictions — but President Cyril Ramaphosa urged people to stick with measures like physical distancing.

-From The Associated Press, Reuters and CBC News, last updated at 7 a.m. ET

Just because Singh vows to prop up the Liberals, it doesn’t mean we’ll avoid a pandem…