Disney’s hopeful ‘Raya’ is another leap for female heroes 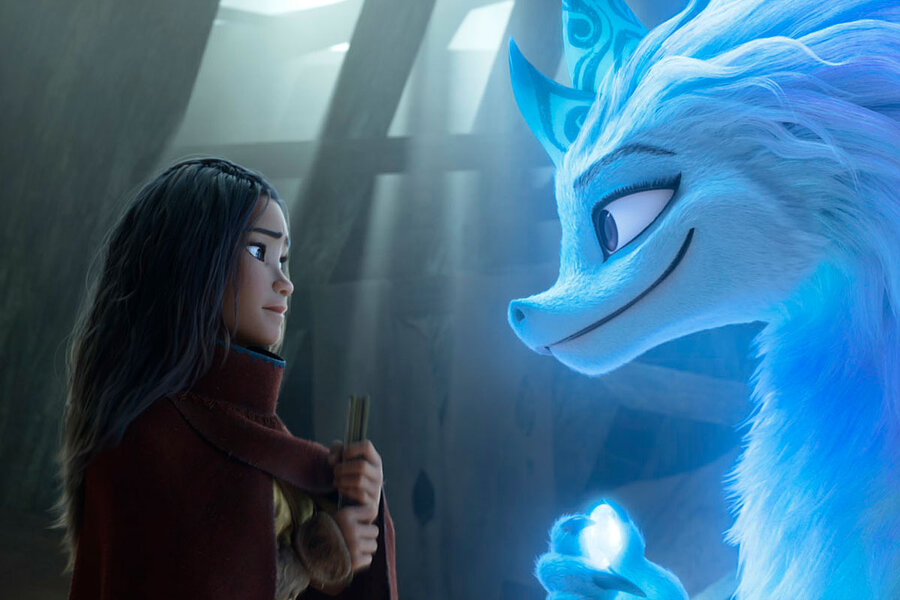 Female warrior story “Raya and the Last Dragon” features incredible combat scenes and stunning weapon design, but saving the world ultimately comes down to a leap of faith and an olive branch.

The new movie, available for a $30 fee on Disney+, offers a timely message about the power of trust, while inspiring hope for the future of the Disney princess franchise. Played endearingly by Vietnamese American actress Kelly Marie Tran (“The Last Jedi”), Raya is considered Disney’s first Southeast Asian princess, and it’s clear from the start that vivid world-building is one of the film’s strengths.

The story is set in Kumandra, a make-believe land inspired by various Southeast Asian nations, where humans and dragons lived in harmony until the latter sacrificed themselves to protect the world from malicious spirits known as the Drunn. The kingdom then fractured into five warring societies – Raya’s homeland “Heart,” along with “Fang,” “Spine,” “Talon,” and “Tail.” The magical gem the dragons used to quell the Drunn resides in Heart, a point of mounting political tension.

In the latest Disney princess movie, our reviewer sees an exploration of finding faith in others, and some welcomely complex characters that ought to become the norm.

Fast-forward 500 years, and we meet Raya, defender-in-training of the dragon stone, and her father, the open-hearted chief who dreams of reuniting Kumandra through diplomacy. The film really kicks off when Raya’s counterpart from Fang, Namaari (Gemma Chan), exploits her trust and imperils the dragon stone. The tragic events that follow cement Raya’s newfound hatred of Fang and all the other tribes.

At this point, “Raya” seems more cynical than your average Disney movie – humans are dying, and they have no one but themselves to blame. That foundation makes the hero’s epic journey to restore not just the dragon stone, but also her faith in other people, all the more rewarding.

“Raya” is often predictable, but always entertaining. Awkwafina is perfect as the ultra-expressive Sisu, the last living dragon, reawakened to help Raya on her quest. Their charming band of war-torn misfits (including a crime boss baby and her cartel of thieving con-monkeys), the lush animation, and nods to different Southeast Asian cultures are all reasons to watch this movie. Of course, there’s also an argument that the hodgepodge universe promotes a homogenous view of Southeast Asia, rather than honoring the region’s unique cultures – and the movie caught flak for casting East Asian actors in several main roles. Nevertheless, as I watched Raya, Namaari, and Sisu grapple with anger, fear, and self-doubt, I realized “Raya” had done something few films even try – it allowed three well-developed female characters to drive the story.

Still, many have noted the similarities between Raya and other Disney princesses. Like Mulan, who broke ground as the first Asian princess, Raya is a warrior driven by love for her father. Like Elsa in “Frozen,” she carries a significant part of the blame for creating the movie’s main crisis. The movie “Moana” also follows a chieftain’s daughter on a mythology-based quest, and like both Moana and Elsa, Raya has no romantic interest. Although the film’s main takeaway – that the bravest thing you can do is trust others – is prescient and uniquely “Raya,” these thematic similarities have fueled one of the film’s most prominent criticisms: “Raya” is formulaic, unoriginal.

But rather than rip-offs, I see a series of positive trends changing the Disney princess pipeline: more flawed heroes, more female friendships, more complicated villains, more diversity, and more courage. What we see now is the culmination of movies like “Mulan,” “Frozen,” and “Moana.” Raya isn’t groundbreaking; she’s even better. Raya is the new norm.

Is Silicon Valley in Trouble This Time?