‘Filibuster’ origins: Does it bring consensus or conflict? 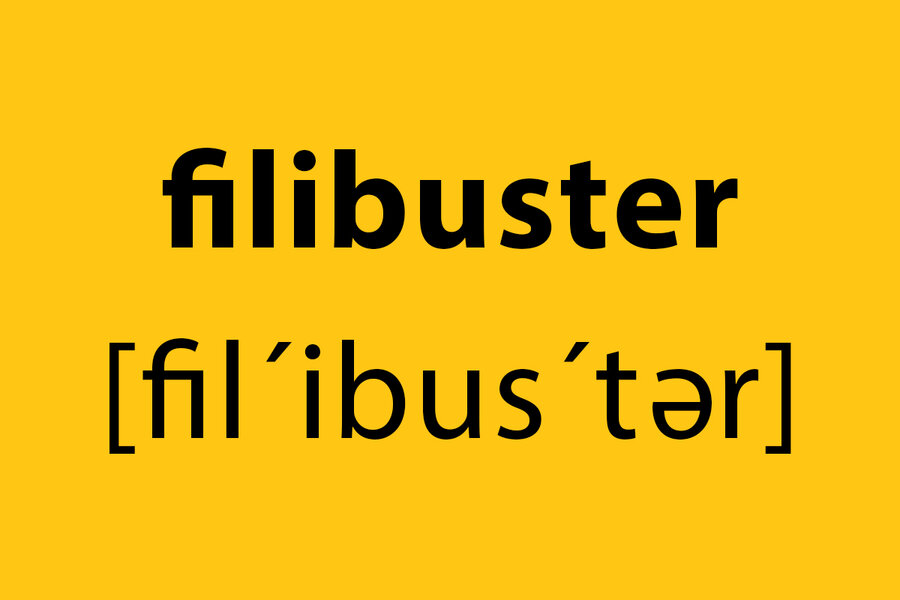 The filibuster sounds fun, as if Mary Poppins might sing about it, or Alice chat about it in Wonderland. What it denotes is anything but enjoyable, however: all the ways progress can be delayed or obstructed in a legislative body. Sometimes this involves arcane parliamentary motions or adding extraneous amendments to a bill under consideration. Famously, a filibuster can be a long speech, “an attempt to talk something to death,” as The New York Times described it in 1964.

In the U.S. Senate, filibusters rely on the rule of cloture (a French parliamentary term for “closure”). Most legislation needs only a simple majority of votes (51) to pass. To bring a bill to a vote, however, a supermajority (60) must agree to invoke cloture, which ends debate and allows the bill to proceed. If the minority party has 41 members who would vote “no” on cloture, they can block a piece of legislation indefinitely. When politicians discuss “ending the filibuster,” as Democrats did in January, they are really talking about eliminating this 60-vote threshold to allow bills to move forward.

Proponents of the filibuster, such as Republican Sen. Mitch McConnell, argue that it forces legislators toward “building stable consensus,” since the majority must work with the minority to pass bills. The Brennan Center for Justice, in contrast, claims that it has the opposite effect: “the ability of a small group to derail legislative action has prevented senators from working across party lines to engage in bipartisan deliberation and policymaking.”

Etymologically, filibuster has more to do with conflict than with consensus. It comes from the Dutch vrijbuiter, a 16th-century term for “plunderer.” The word bounced around several European languages and appeared in English as freebooter (“pirate”) and flibustier (an 18th-century pirate focused on attacking the Spanish in the West Indies) before settling down as filibuster. By the mid-19th century, filibusters were “American adventurers who … participated in private military forces” that invaded countries “with which the United States was formally at peace.” The most famous filibuster of this sort, according to historian Robert May, was William Walker, a Tennessean who conquered and ruled Nicaragua for a few months in 1856.

The word was first used in a legislative sense in the mid-19th century. Filibustering senators were metaphorical pirates, stealing time and hijacking the priorities of the majority. Or they were mercenary interventionists, attempting to overthrow the plans of a duly elected legislative body.

The filibuster might sound inconsequential, but its effects on American democracy are profound.

A Smarter App Is Watching Your Wallet

The American Art of Choosing Sides