5:10 PM PT — Hagler’s former promoter, Bob Arum, tells TMZ … “Marvin Hagler was among the greatest athletes that Top Rank ever promoted. He was a man of honor and a man of his word, and he performed in the ring with unparalleled determination. He was a true athlete and a true man. I will miss him greatly.”

4:28 PM PT — One of Hagler’s sons, James, tells TMZ his father was taken to a hospital in New Hampshire earlier on Saturday after experiencing trouble breathing and chest pains at home.

We’re told about four hours later, the family was notified he’d passed away. A cause of death is still unknown at this point … it’s also unclear if Hagler’s death is COVID related.

Marvelous Marvin Hagler — former middleweight champion and one of the greatest boxers who ever lived — has died … this according to his wife.

A post with the sad news went up Saturday on Hagler’s official fan club page on Facebook, reading … “I am sorry to make a very sad announcement. Today unfortunately my beloved husband Marvelous Marvin passed away unexpectedly at his home here in New Hampshire. Our family requests that you respect our privacy during this difficult time.”

The note was signed by his wife, Kay. The exact circumstances of his death weren’t released. 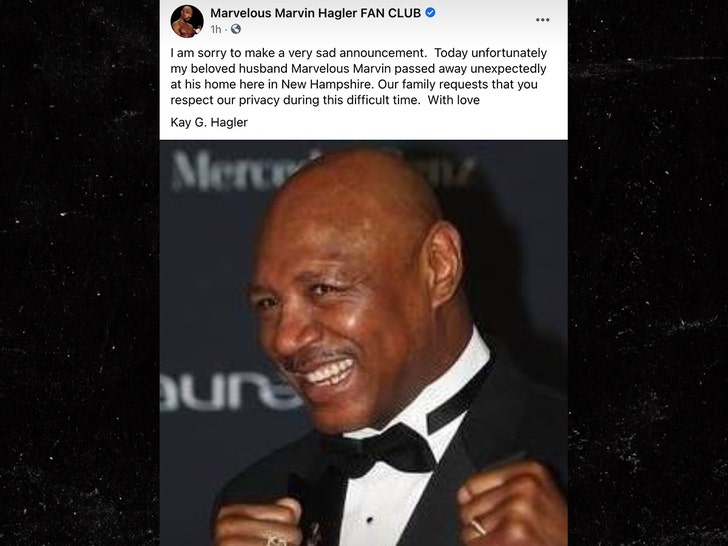 Hagler has gone down in history as a boxing great, and perhaps one of the best — if not THE best — middleweight fighters to step in the ring. He held the title as the undisputed middleweight champion of the world from 1980 to 1987 … an incredible run.

He got his first title shot in ’79 against Vito Antuofermo — which got called a draw, despite many feeling Hagler had taken it. He got a 2nd shot at the title the following year … this time against Alan Minter — whom Hagler pounded into a 3rd round stoppage.

Year after year, Hagler successfully defended his title … but one of the most brutal bouts to date ended up going down against Tommy Hearns in 1985, which got billed as “The War.” It only went three rounds, but all of them were brutal … especially that opening one, which is regarded as one of the most violent and action-packed to date.

Hagler’s reign came to an end in 1987 against none other than boxing icon Sugar Ray Leonard, who came out of retirement for another shot at the title. They went all twelve rounds, and despite many saying Hagler got the better of SRL … the latter was announced as the winner in a split decision. Granted, Leonard landed a higher percentage of punches.

Post-boxing, Hagler moved on to a career in movies … in Italy no less. He notably starred in ‘Indio’ and ‘Indio 2’ as well as a few other action flicks. He was inducted into the International Boxing Hall of Fame in 1993.

Hagler is survived by his current wife and five children from a previous marriage. He was 66.

‘Own the Room’ Review: Chasing Their Entrepreneurial Dreams

Tributes to Murray Walker from across the motorsport world