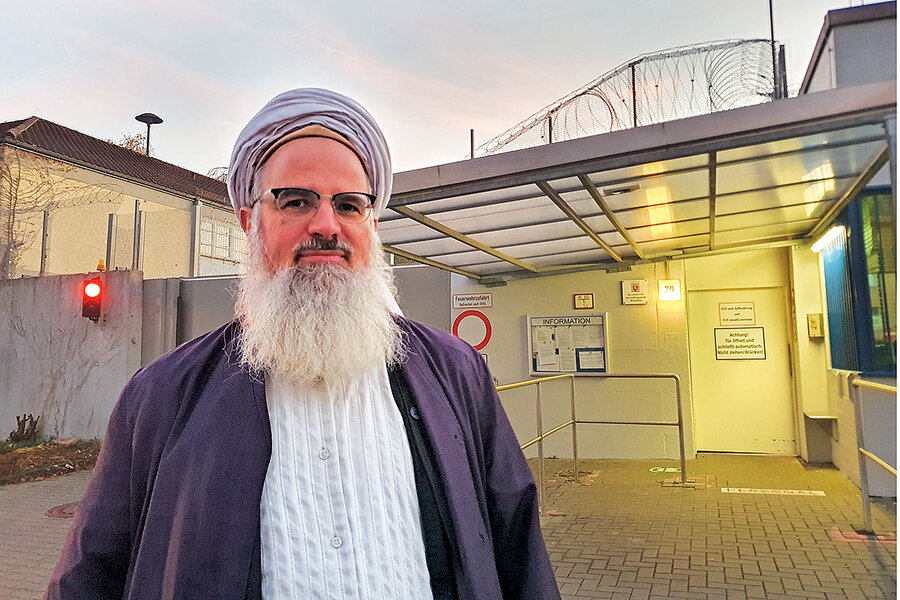 Abdul, who spent five years imprisoned on robbery charges, remembers being angry and full of self-hatred. He says he could have become a young jihadi – until he met Imam Husamuddin Meyer.

“With Imam Meyer, I discovered the real core of Islam,” says Abdul, who asked that his real name be withheld. “It’s about self-reflection.” Now released from prison, he has fulfilled his dream of working as an artist.

Prisons have been a hot spot for radicalization, resulting in a global spate of terrorist acts. But one imam in Germany shows how spiritual counseling can help inmates reach the inner peace they need to avoid veering into Islamic fundamentalism.

Imam Meyer is Germany’s first, and longest-serving, Muslim prison chaplain. Over the past 12 years, he has gone to the youth correctional facility in Wiesbaden daily to pray, talk, and recite the Quran with young Muslim inmates. He’s seen how giving prisoners “spiritual tools” can help them reach the inner peace they need to avoid veering into Islamic fundamentalism. “We have to fight hatred,” he says.

Inside the Wiesbaden juvenile prison with Imam Meyer as a chaplain, day-to-day life works better; there are fewer problems, prison officials note. Says Clementine Englert, a head judge who is also a coordinator for the Network for Deradicalisation in Corrections: “Good spiritual counseling automatically has a deradicalization impact.”

As Imam Husamuddin Meyer walks through this old city of cobblestone streets and classical architecture in central Germany, many young people pass by and wave to him as though he were a YouTube star. Clad in a turban, the bearded Sufi cleric is a visible presence in the community. “I know so many of them,” he says, with a hint of pride.

Imam Meyer, who grew up in a well-to-do Protestant family nearby, is the country’s first, and longest-serving, Muslim prison chaplain. As people wave to him, he is heading to work at the juvenile prison. And his work has been critical: He’s played a key role in fighting the religious extremism that all too often thrives behind bars.

Long before many Germans became aware that prisons were a hot spot for radicalization, Imam Meyer saw how giving inmates “spiritual tools” could help them reach the inner peace they need to avoid veering into Islamic fundamentalism. Over the past 12 years, he has gone to the youth correctional facility daily to pray, talk, and recite the Quran with young Muslim inmates so they are “protected from outside influences and not … easily manipulated,” he says.

Prisons have been a hot spot for radicalization, resulting in a global spate of terrorist acts. But one imam in Germany shows how spiritual counseling can help inmates reach the inner peace they need to avoid veering into Islamic fundamentalism.

Radical Islam “is like a disease,” he says. “Once it infects you, it infects others. We have to fight hatred.”

In her 35 years as a prison director, Hadmut Jung-Silberreis has also seen the importance of solid spiritual counseling. This is a constitutional right offered to prisoners regardless of their faith, but in reality, it has been difficult to offer such counseling to Muslim prisoners. One reason is an institutional hurdle: Under Germany’s unique model of state-church relationships, most Islamic communities have yet to be recognized as legal cooperation partners of the state, which would entitle them to an array of privileges, including fully paid chaplaincy services.

Yet Muslims have been filling Germany’s prisons, driven in part by jihadism and “honor killings.” When Ms. Jung-Silberreis took over the youth correctional facility here in 2006, she vowed “to give young Muslim men proper spiritual counseling.” She asked the city for help in finding an imam to lead Friday prayers, one who would only speak German and not represent a foreign nation. Mr. Meyer was the clear choice.

The son of a school principal and a psychologist, Imam Meyer had once eyed becoming an engineer. But a post-high school motorbike trip through Tunisia, Morocco, Algeria, and other Muslim countries in the 1980s transformed his plans. The beauty and hospitality he witnessed rekindled a spiritual longing that had nagged at him since childhood. Instead of engineering, he studied ethnology, geography, and Arab and Islam studies. The discovery of Sufism, a mystical branch of Islam that emphasizes connecting with God through emotions rather than through religious edicts, prodded him to convert to Islam. “Those people lived the love of God,” he says.

Back in Germany in the mid-2000s, he traded his first name, Martin, for Husamuddin and his Western clothes for a turban and a beard. He became an imam in a small mosque in Wiesbaden, earning a living as a private tutor. When the prison director, Ms. Jung-Silberreis, called, “I just went in and said, ‘Let’s see what happens,’” he says.

And so on a Friday evening that fall, he rolled out a small rug in the prison’s chapel for the first time. Almost all the Muslim prisoners – roughly 100 – came in for prayers. Their thirst for answers and for rudimentary knowledge of Islam convinced him that he had to come back.

As Imam Meyer helped sensitize officials to budding religious extremism, the Ministry of Justice in the German state of Hesse started hiring more Muslim chaplains. Then in 2016, following terrorist attacks in Paris and Brussels, the ministry significantly increased its budget for Muslim prison chaplaincy, making it the cornerstone of a newly created Network for Deradicalisation in Corrections (NeDiC). There are now Muslim chaplains for all 16 of Hesse’s prisons.

“Good spiritual counseling automatically has a deradicalization impact,” says Clementine Englert, a head judge who is also NeDiC’s coordinator at the Hessian Ministry of Justice. Her department – not Muslim associations – carefully selects and oversees the training of Muslim chaplains, with Imam Meyer serving as the most experienced member. Inside the Wiesbaden juvenile prison with him as a chaplain, day-to-day life works better; there are fewer problems, prison officials note.

“Inmates feel listened to” with an imam “who speaks their language,” says Ms. Jung-Silberreis. “They feel that the institution takes their faith seriously and offers them ways to practice it.”

The inmates come from all walks of life: the refugee caught stealing a phone, the young man charged with drug possession, as well as Islamic State returnees. Conversations with Imam Meyer include the fear of recidivism and the atrocities seen fighting in Syria and fleeing war in the Middle East. Disoriented and angry, many of the young men are vulnerable to the simplistic, black-and-white worldview of radical Islam. Seen as Turks, Albanians, or Bosnians by their German friends and as Germans by their parents, they are caught in an identity conflict. “Then an Islamist comes to you and says, ‘You don’t belong anywhere; just be Muslim,’” says Imam Meyer. “They offer them a third way.”

Abdul, a radicalized Muslim convert who spent five years in prison on robbery charges, says he could have become one of those young German jihadis, until he met Imam Meyer. He remembers being angry and full of self-hatred, and “when you hate yourself, you’re capable of anything,” says Abdul, who asked that his real name be withheld.

“With Imam Meyer, I discovered the real core of Islam,” he says. “It’s about self-reflection.”

While Abdul has “made it” – once released from prison, he fulfilled his dream of working as an artist – many haven’t. “I’ve known many who’ve made headlines,” Imam Meyer sighs.

He met Arid Uka, the Kosovar Albanian who shot two American airmen at the airport in Frankfurt in 2011 – the first deadly Islamist attack on German soil. And after Mohammed Merah, a French jihadi of Algerian descent, went on a killing rampage in southern France the following year, an inmate came to Imam Meyer and said what a great deed Mr. Merah had committed. “I looked at him for a long time and said, ‘He did well?’”

“But I then understood,” he says. “Everywhere, Muslims are bombed – in Afghanistan, in Libya.” Often, a deep sense of injustice is behind religious extremism, he says.

“The inmates ask me, is terrorism allowed in Islam?” Imam Meyer says. “I tell them, ‘No, Islam is a way to reach inner peace, the good life here and beyond. Terrorism is contrary to that.’” Imam Meyer wants to give inmates inner peace because “if they are at peace with themselves and content, they don’t need to commit crimes.”

But for radicalized youths to trust him, he needs time – more than the 14 hours per week he is allotted now. It is high time to treat Muslim chaplains the same as full-time Christian chaplains, he says.

On a recent winter afternoon, a young man called the hotline of the Violence Prevention Network, a deradicalization group that Imam Meyer also works for. The shy man came to see the imam, who rolled out his prayer rug, closed his eyes, and let his prayer beads slip through his fingers while reciting a verse. “You need to create new thinking,” he says.