“Give us back our people”: the Ugandans who disappeared Senior officials claim not to know the whereabouts of individuals arrested nearly two years ago, as state abductions continue. 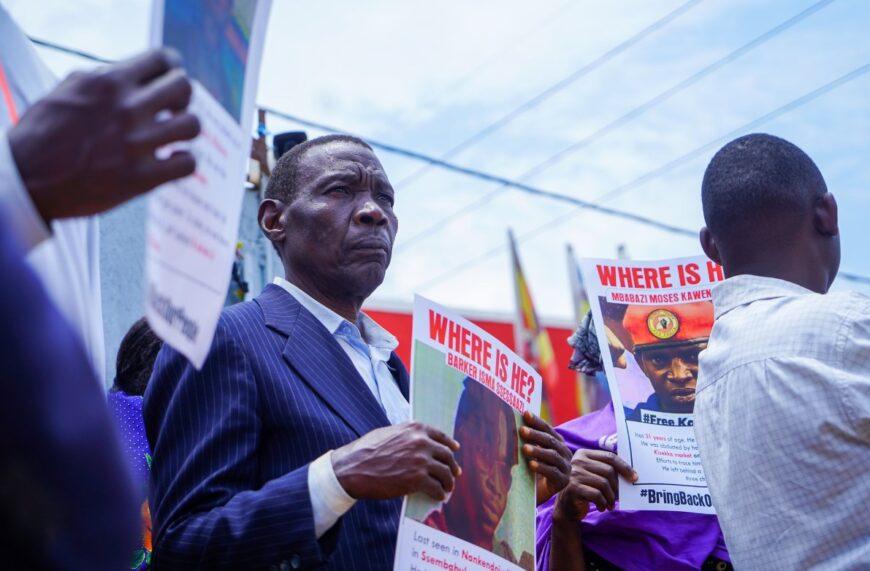 A man holds an image one of the individuals who disappeared and is still missing at a rally in Uganda. Credit: NUP.

On 23 August, Moses Bukenya got his freedom from Kitalya prison, outside Uganda’s capital Kampala, after spending over 19 months in detention without trial. His alleged “crime” was wearing a red beret, a symbol associated with supporters of the musician-cum-politician Bobi Wine. He was missing for so long that his family held a funeral service for him.

Bukenya, who goes by the nickname Wiser, says that he spent part of his ordeal in so-called “safe houses”, which are really dungeons run by state security. “I was abducted from Nsambya suburb [in Kampala] and I was kept away from my relatives and friends,” he says. “I was grossly tortured. They made me drink water all the time so that I could urinate on the naked electric cables so that I could get electrocuted.”

Yet Bukenya is one of the lucky ones: he is now free. As we reported last year, Ugandan security forces detained more than a thousand people in the months leading up to the 2021 presidential election. Some were arrested by the police and taken to prisons. Others were abducted by soldiers or plainclothes men, who took them to barracks or secret locations.

At the time, President Yoweri Museveni dismissed reports of missing people. “The talk of disappearance should be ignored, because it can’t happen under the [National Resistance Movement],” he said in a televised address in February 2021. “We never cover up, there’s nothing which we do and hide.”

And yet today, 18 months after that speech, there is still no sign of some of the young men snatched away by the state. The National Unity Platform (NUP), the party Bobi Wine leads, reports that at least two dozen of its supporters are missing entirely, most of them since the before the 2021 election, with many more languishing in prison, such as 31 of their supporters who were yesterday denied bail by an army court martial. We spoke to their families, who told us they are living in limbo, uncertain whether their loved ones are dead or alive.

Shafik Wangolo’s youngest daughter toddles into the tiny room where she lives with her mother and two older siblings. She has never met her father. On 3 December 2020, a couple of months before she was born, Wangolo was bundled into a vehicle and driven away. He had been standing at a mobile money stall when an argument broke out over Museveni’s campaign posters. His family have not seen him since.

Wangolo’s wife, Florence Nabakooza, says that she sometimes hears from former detainees who say they have seen him alive. She has gone to Kitalya prison three times and to Kigo prison twice to follow up reports that he is there. Each time, the prison officers tell her they have no record of him. Meanwhile, she scrapes a living by washing clothes. The landlord is hassling her about unpaid rent. She cannot afford to send her two oldest children to school. 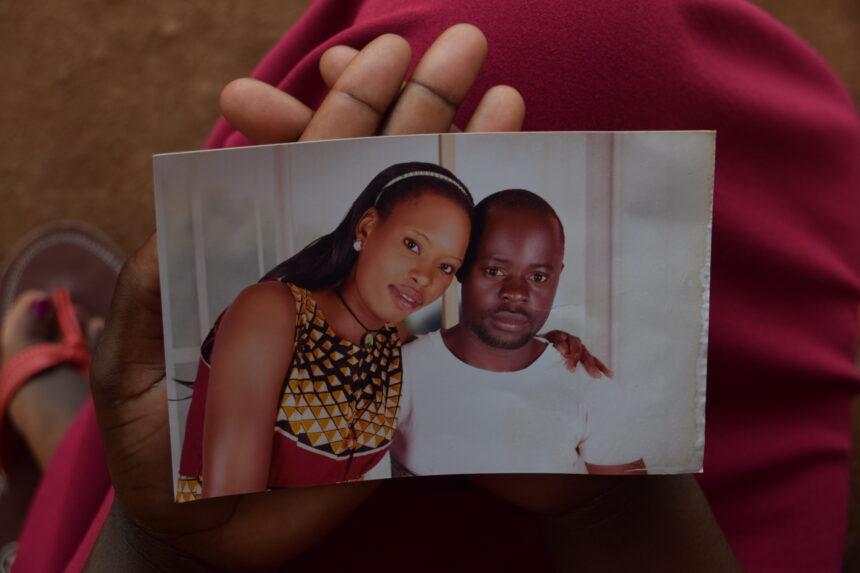 Vincent Nalumoso, in a family picture with his wife, taken before he was abducted in December 2020. Credit: Isaac Kasamani.

On the other side of Kampala, Dorothy Najjuka tells a similar story. Her brother, Vincent Nalumoso, was grabbed by plainclothes men in Bugolobi market on 1 December 2020. A friend who was kidnapped with him, and released four months later, told her they were together in detention, where they were beaten and tortured. “Up to now, we don’t know where he is,” says Najjuka. “The kids keep on asking about their dad. Sometimes we even lose words to tell them.”

She too has traipsed between prisons, police stations, and barracks. At Mbuya, the military intelligence headquarters, soldiers told her they do not hold any prisoners there. But many former detainees have said they were held at Mbuya, as chronicled by newspaper reports and Human Rights Watch. “Whenever you go to the authorities, the only answer they will give you is: ‘We don’t have him, we don’t know his whereabouts’,” says Najjuka.

The main targets of abductions have not been the lead organisers of NUP, but its grassroots activists. “It has of course had a chilling effect, especially on the base,” says David Lewis Rubongoya, the party’s secretary general. “People fear to engage. And I think that’s what the regime wants, to instil a lot of fear into the population.”

Nobody in government is saying where these individuals are. Deputy army spokesman Colonel Deo Akiiki and police spokesman Fred Enanga both claim ignorance, even though the police have previously admitted that they arrested John Ddamulira, one of the missing men. A prisons spokesman meanwhile says that none of the twelve men on a list provided by NUP are currently in their jail facilities (although they said that one of them, Moses Mbabazi, was released in July after a spell behind bars).

Chris Baryomunsi, the information minister and government spokesman, says that he is not sure whether the missing people were arrested. “When we carry out arrests, we do not target a particular political group or tribe; we target criminals,” he insists. “But if it is true that some of these mentioned people are still missing up to now, we request the police to follow the law and release them or produce them in courts of law.”

The chain of obfuscation goes to the top. In a public letter last year, Museveni wrote that 51 people were being held by Special Forces Command (SFC), an elite presidential guard that was led at the time by his son, Muhoozi Kainerugaba. It made front-page news. But in May, when one of the authors interviewed Kainerugaba for The Economist magazine, he claimed to have no memory of that letter. When the relevant passage was read out to him, Kainerugaba flatly contradicted his father. “Maybe he didn’t capture it well,” he said. “I don’t think that was SFC holding those people. It was another unit, not SFC.” Either the father was lying, or the son was.

Meanwhile, arrests and abductions continue. At least six people have been detained on political charges over the last month in and around Kampala. Four of them were eventually brought to military or civilian courts on various charges before being remanded to prison. They were: Bashir Kasagga, taken by armed men wearing what looked like army uniform seized on 6 September; Jakaana Nadduli, a son of former minister Abdul Nadduli; Teddy Nalubowa, a businesswoman; and journalist Kenneth Kavtheulu of Buganda Broadcasting Service (BBS) Terefayina.

The remaining two, Hussein Kato Gaaza and Abbas Abtex Semakula, are missing entirely. In separate interviews, their relatives said their loved ones had been taken by gun-wielding and uniformed men. They are not sure if they are alive or not.

As well as seizing people around Kampala, the army has been rounding up and unlawfully detaining young men in the north-eastern region of Karamoja, where it is waging a “disarmament campaign” against cattle rustling gangs. The UN Human Rights Office and Uganda Human Rights Commission have registered cases of arbitrary arrest and torture in Karamoja. They have recorded instances of prolonged detention in military barracks, the imprisonment of children, and the arrest of suspects’ relatives, according to a presentation delivered in Amudat district last month.

Contrary to what President Museveni may claim, unlawful detention and enforced disappearances are not an aberration: they are a tactic to impose his power. And the consequence is a trail of tears.

“If at all they have committed any crimes, they should bring them to court,” says a distraught Najjuka, the sister of Nalumoso. “If they don’t have cases then they should give us back our people.”

Those colorful stories of acronyms? They’re often not true.