How smartphones and social media are redefining protests in Myanmar 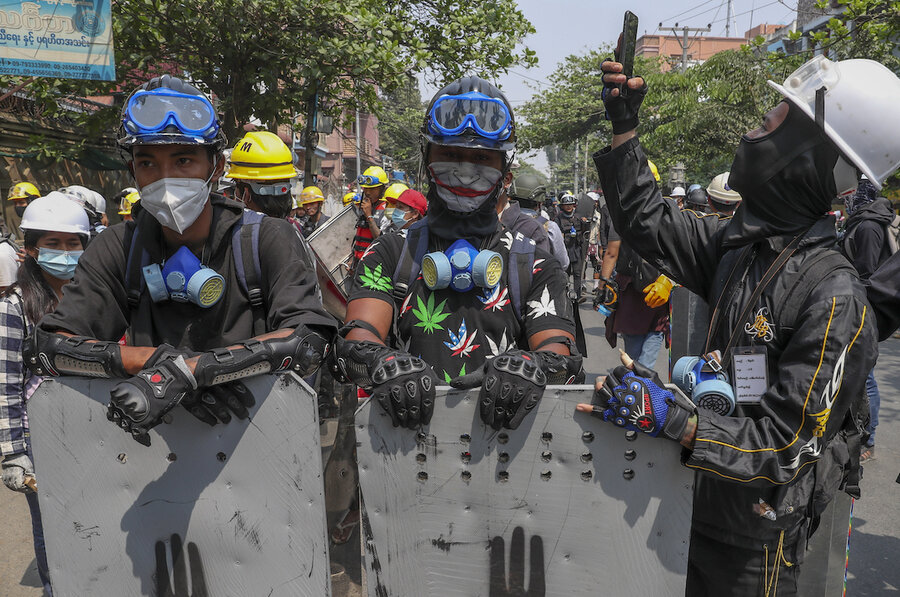 The images ricochet across the planet, as so many do in this dizzying era of film it, upload it, tell it to the world: scenes from a protest-turned-government crackdown, captured at ground level by smartphone users on the streets of Myanmar.

Images shot across barricades and furtively through windows. From behind bushes and through smudged car windshields. Horizontal video. Vertical video. Video captured by people running toward chaos and away from it. People shouting. People helping. People demanding. People dying.

The world is watching violent events unfold in Myanmar for many reasons, but perhaps one above all: because it can.

It is a dynamic completely unlike the uprising that spread through the Southeast Asian nation in the pre-internet, pre-smartphone summer of 1988. Then, when student-led demonstrations were violently put down by the government, cementing Myanmar’s global notoriety as an isolated, repressive state, it took months, even years, for the outside world to understand the full story of what had happened.

This time around, the imagery is plentiful and unsettling. Filmed by participants on the ground and uploaded, sometimes immediately, the protests and crackdowns are reaching millions of handheld devices around the planet, also almost immediately.

It’s a vivid example of a technological truism in an age when capturing images has become utterly democratized: If you can glimpse it up close, you’re more likely to pay attention.

“You know the old adage that a picture speaks a thousand words. It makes you feel like, `This is happening, this is true,’” says Kareem El Damanhoury, a media scholar at the University of Denver who is writing a book about visuals in times of conflict.

In Myanmar today, he says, “The images are not just complementing what’s happening. Over time they become defining of the conflict itself.”

As of Wednesday, more than 60 people were dead from the government crackdown on mass protests in Myanmar after a coup early last month. Nearly 2,000 are estimated to be imprisoned, and media outlets are being targeted. Among those held: Thein Zaw, an Associated Press journalist taken into custody in a chokehold by authorities while doing his job 10 days ago – an arrest also captured on video and widely shared.

The ability of on-the-ground imagery from amateurs to define a conflict, through still photos and particularly video, has been accelerating for more than a decade.

Many media scholars cite the 2009 election protests in Iran and the chronicling of government violence there, particularly the shooting death of a young musician named Neda Agha-Soltan, as an inflection point.

That came four years after the dawn of YouTube and two years after Apple introduced the iPhone, which ushered in a trio of watershed moments: Amateur video became easily shareable, smartphones with decent-quality video and instant uploads became affordable, and many humans suddenly always had cameras in their pockets.

The decade that followed brought many opportunities for democratized, phone-shot imagery – from the 2011 Arab Spring to the Hong Kong protests of 2014 and the increasing government crackdown against them in ensuing years.

Last year in the United States, the killing of George Floyd at the hands of a Minneapolis police officer was captured on nearly nine minutes of anguished video – only the latest imagery of police violence against Black Americans to command worldwide attention.

Mr. Floyd’s death set off a summer of anti-racism protests and law-enforcement responses, both of which sometimes turned violent – and were chronicled by millions of minutes of shared on-the-ground video, which became central to Americans’ understanding of the events. Same story with amateur video shot by participants in the siege of the United States Capitol in January, which has been used to understand the events, to propagandize them, and to prosecute suspected insurrectionists.

In the case of Myanmar, the sheer amount and quality of the amateur video is particularly striking when contrasted with “8.8.88” – the August 1988 pro-democracy uprising against dictator Ne Win that produced a military coup the following month in the nation then known as Burma.

Imagery from those days was relatively scant, and communications from within the country – visual and otherwise – were vigorously muzzled. Any iconic images came from, or were amplified by, established news outlets. There was no internet yet, no shared video or social platforms to host it. And then much of the world forgot about Myanmar for nearly a generation.

It’s different this time. Though YouTube has taken down some Myanmar military channels for violating its terms of service, citizen video is plentiful. And representatives of governmental bodies from the United States to the United Nations have cited the video as a muscular reminder of the power of the image to impact perception and, possibly, policy.

“I was struck by the vibrancy of the images I have seen – the color, the kinetic energy in them, which seemed pretty distinctive,” says Mitchell Stephens, a New York University professor and author of “The Rise of the Image, the Fall of the Word.”

The imagery out of Myanmar, he says, “brings back bad memories of all the failed democracy protests we’ve had in recent decades around the world. I can’t help thinking of the Arab Spring, which was such an immense disappointment and tragedy, or Tiananmen Square.”

The difference, of course, is that imagery from the 1989 Chinese government crackdown on democracy protesters was, in an era of fax machines, also almost exclusively disseminated by professional media outlets until they were restricted or expelled. The most-remembered image of that period, the photo of a lone man confronting a column of tanks just off the square, was captured by four news photographers with professional cameras from high-altitude balconies.

Same story with much of the visuals that chronicled global unrest over the past 50 years. The most iconic images of the Vietnam War – the ones that helped change the U.S. government’s commitment to it, such as AP photographer Nick Ut’s photo of Kim Phuc running down a street, naked and burned by a South Vietnamese napalm attack – came from professional journalists. After all, they were the ones who had the infrastructure and support to transmit their images to the wider world.

Now pretty much everyone has that infrastructure in their pockets. But does that mean the global attention will last? If precedent is any indication, global news consumers in a landscape weighed down by a glut of imagery may surrender to short attention spans – even if the scenes coming out of Myanmar exhort them to do otherwise.

“I’m very hesitant about whether and how the democratization of image[s] can put pressure on outside forces,” says Wei-Ting Yen, who teaches Asian politics at Franklin & Marshall College in Pennsylvania.

“It does provide a closer-to-reality kind of understanding,” she says. But beyond that? Perhaps not so much.

“In Myanmar, the first few days it was amazing, and then you saw the cracking down, which was horrifying,” Ms. Yen says. “But as it goes on, people have a short memory. They forget, and the next time they see the image – people who don’t understand what’s going on – they say, `Oh, this is what’s happening,’ and they move on.”

How resilience in different forms has carried us through the pandemic