How well have Canadians complied with COVID-19 restrictions? New data offers a glimps…

Back in the fall, when COVID-19 cases were on the upswing and Quebec once again became the Canadian epicentre of the pandemic, Health Minister Christian Dubé blamed the province’s “Latin spirit” for the increase. Quebecers, he claimed, like to party too much and are less disciplined than their Anglo neighbours.

It turns out that wasn’t quite true. Quebecers are a compliant bunch. So are most Canadians, a CBC News analysis of mobility data suggests.

The CBC compared one year of COVID-19 mitigation measures to how much people moved about outside their homes, according to mobility data provided by Google. In most provinces, as the rules became stricter, mobility levels dropped — just as public health officials had hoped. Quebec was no exception.

As parts of Canada enter a possible third wave of infections caused by highly contagious coronavirus variants, this data suggests restrictions are indeed effective at getting people to stay home.

The chart below compares the change in mobility among a province’s population to a stringency index measurement of its public health restrictions calculated by the Centre of Excellence on the Canadian Federation, a unit of the Institute for Research on Public Policy (IRPP), a Montreal-based think-tank funded by the federal government. The higher the red line, the stricter the measures. In perfectly compliant provinces, the lines would be mirror images.

Mobility data is scant for P.E.I. and the territories, and is not included.

“That was a convenient excuse,” Charles Breton, executive director of the IRPP, said of Dubé’s “Latin” comment. “Quebecers were compliant. Maybe in the summer they were quicker to go out and have a drink with friends, but in the fall, people did comply.”

Quebec was the only province to enact a curfew, which began in January. “People didn’t complain that much,” he said. “Eventually, we stopped talking about it.”

The Atlantic provinces and Saskatchewan exceptions

Mobility data is based on the location of cellphones belonging to users with a Google account and who have their location history turned on. As such, it does not represent all Canadians. For example, seniors without smartphones and people in rural areas with scant cellular coverage may not be captured in the data.

The data is aggregated and anonymized, and it measures the change in time spent outside the home compared to typical levels before the pandemic. It doesn’t differentiate between, say, going to the store for essential items or going to another residence for a big get-together. Despite its flaws, it’s useful for seeing general mobility trends.

According to the data, the Atlantic provinces appear to be the least compliant: their stringency of measures and mobility are less symmetrical compared to other provinces. But this is likely a result of the Atlantic bubble, which kept infection rates low and allowed residents to enjoy somewhat normal levels of movement.

The bubble, created last summer, allowed people in the Atlantic provinces to travel freely between the jurisdictions, but barred other Canadians from coming in without proof of quarantine plans.

“That’s the ideal, desired scenario,” said Jean-Paul Soucy, a PhD student of epidemiology at the Dalla Lana School of Public Health in Toronto, who has been studying how mobility affects COVID-19 infection rates.

“If the only source of cases are from travellers, not from the community, there’s no relationship between internal mobility and transmission [of the virus].”

Compare the provinces below. The Atlantic provinces, in shades of grey, showed the biggest rebound in mobility since the first wave. In Newfoundland and Labrador, mobility returned to pre-pandemic levels in August (zero on the chart).

Quebec, on the other hand, had the biggest drop in both the first and second waves, corresponding to some of the strictest rules in the country during both periods.

Saskatchewan showed similar mobility levels to those in the Atlantic provinces, but it didn’t have the same low infection rates. Its government bet on relatively lax rules during the second wave, trusting the public to follow recommendations without enforcement. Banquet halls and gyms remained open, for example.

It had the highest per-capita case count in the country in mid-January, following a modest dip in holiday mobility compared to more drastic decreases in other provinces.

According to Nazeem Muhajarine, a professor of community health and epidemiology at the University of Saskatchewan, this was evidence the lax approach doesn’t work. He has surveyed people in the province during the pandemic, and one-third of respondents consistently said that those around them were not following public health guidelines for physical distancing, mask-wearing and handwashing.

There are no other surveys to make direct comparisons to other provinces, but one poll from Insights West suggests that 84 per cent of Canadians said they follow the rules at least most of the time.

“We have found time and again in public health that most people comply, but there is always a minority who don’t, and for them, it means enforcement,” Muhajarine said.

Not all people are in a position to comply, he said, because of work and personal circumstances. Many COVID-19 outbreaks happened among essential workers in low-income, racially diverse communities.

“This narrative of personal responsibility will only go so far,” he said. “It ignores a societal narrative, that visible minorities and vulnerable people are bearing the brunt, and we must think about them.”

How much does mobility need to drop?

A few recent studies may offer some clues on how mobility levels affect infection rates. Yigit Aydede, a professor of data analytics at St. Mary’s University in Halifax, studied mobility in three cities — Montreal, Toronto and New York — and found it takes, on average, nine days for a drop in mobility levels to translate into a drop in cases.

Kevin Brown and Jean-Paul Soucy, infection disease researchers at Dalla Lana, developed a model that predicts how much mobility should drop for cases to start decreasing.

On average, they found, people need to move half as much as they normally did pre-pandemic for cases to stop increasing, especially in the winter.

“When people are moving outside the house more, we can assume there are more opportunities for the virus to transmit,” Soucy said.

WATCH | ‘This is not the time to have big gatherings’: 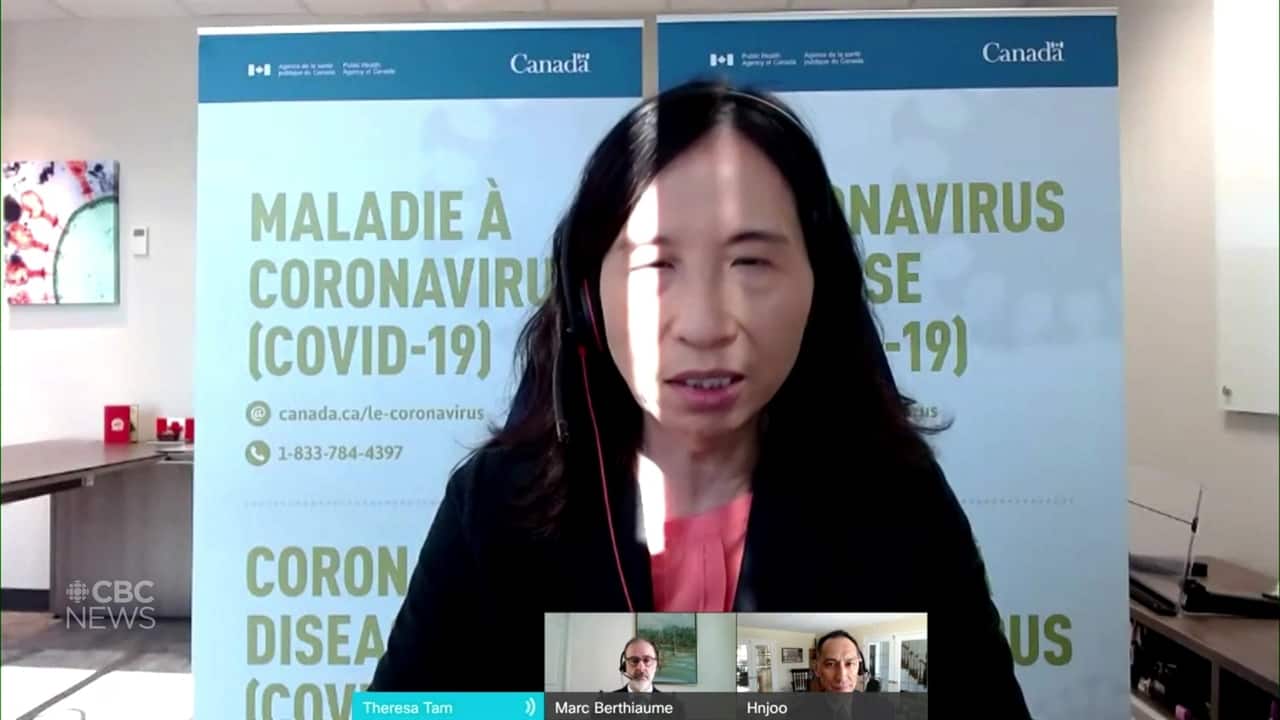 Canada’s Chief Public Health Officer Dr. Theresa Tam says it’s not the time to have big gatherings as COVID-19 cases resurge in parts of the country. Tam was asked about gatherings for upcoming holidays such as Easter and the Victoria Day long weekend. 3:21

This threshold is dependent on the season. The model predicts that cases remain low in the summer if mobility drops to about 75 per cent of normal levels.

Both studies are in the pre-print stage and are awaiting peer review to be published in academic journals.

Which measures got people to stop moving

In late October, Alberta limited social gatherings to 15 people, then banned them altogether in early December. It also closed restaurants for indoor dining and cultural venues. These actions were followed by the most dramatic drop in mobility in the province since the pandemic began.

Mobility dropped from 30 per cent below normal levels to a low of 60 per cent around the holidays.

“That seemed to be the thing that really hammered the message of how serious it was,” said Craig Jenne, an associate professor at the University of Calgary’s department of microbiology, immunology and infectious diseases.

“With all these restrictions at once, there was a shock value, and people paid attention.”

Manitoba, likewise, showed the sharpest drop in mobility in the country in November, when cases were rising quickly and the province declared a state of emergency, enacting several restrictions at once.

The chart below compares the mobility in selected provinces with the implementation of five specific measures. The black line is the change in mobility, while the coloured bars in the background show the severity of the measures, as defined by the IRPP. The darker the bar, the stricter the measure for that time period.

Only provinces with high caseloads are shown.

While this suggests strong restrictions are effective at getting people to stay at home, it’s less clear which measures are the most effective, since provinces enacted different varieties of restrictions, making direct comparisons tricky.

Alberta, for example, didn’t shut down non-essential retail stores, but reduced capacity to 15 per cent. Ontario chose to close them in February, and retained low mobility levels after the holidays.

In Quebec, mobility plummeted on Oct. 1 when the province closed restaurants for in-person dining along with cultural venues.

As new coronavirus variants threaten to usher a third wave, provinces may have to contend with the human element of pandemic fatigue, which could undo the reduced infection rates after so many painful sacrifices.

“The key is to find a happy balance,” Jenne said, “where we keep our happiness and sanity and minimize viral spread.”

CBC News isolated mobility data for Canadian provinces from the Google Community Mobility Reports. This data is collected from mobile phones with Google accounts and location history turned on. It’s the same data used to calculate popular visiting times shown when you search Google for a business.

It measures how often people visit certain types of places (like stores and parks) compared to a pre-pandemic average in January and February 2020. It also measures the change in time spent at home compared to a baseline. To calculate overall mobility outside the home, we inverted the numbers for residential data with the following formula, adapted from Brown, Kevin et al.

where TRes is the per cent change in time spent at home compared to the baseline. This is based on assuming that 30 per cent of an average day is spent outside of the residence at baseline (7.2 hours).