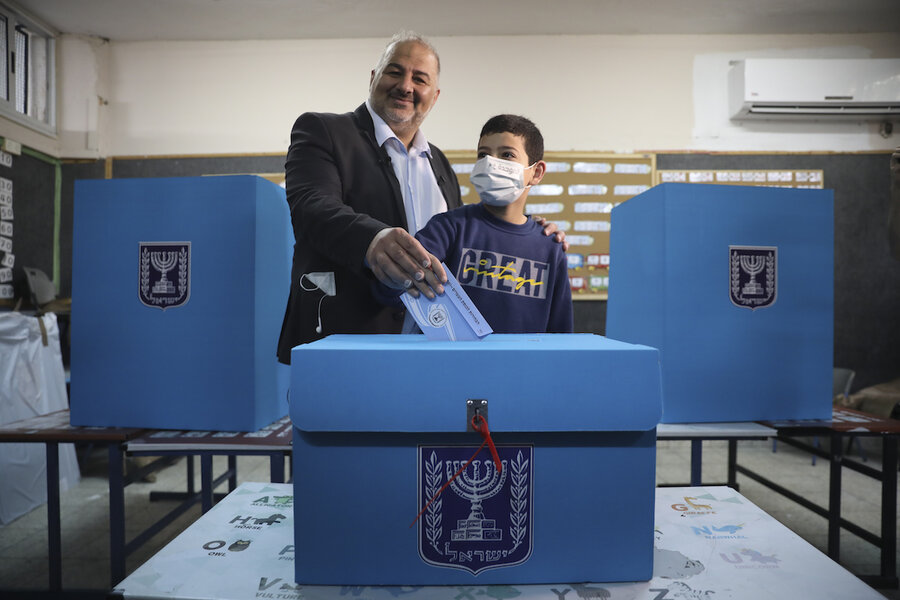 Joe Lunn spoke against lifting pandemic rules to protect the…

Israel on Wednesday appeared to be barreling toward another political stalemate after what was shaping up to be its fourth inconclusive election in the past two years. But there were small signs the country’s bitter rivals were looking for creative solutions to find a way out of the impasse and avoid another election.

Tuesday’s elections left a razor-thin margin between a right-wing coalition led by Prime Minister Benjamin Netanyahu and a diverse array of parties bent on ousting him.

To prevail, each side may need the support of an Arab Islamist party that appears to have clinched just five seats in the 120-member Knesset but is not committed to either, according to near-final results.

Candidates across the political spectrum called for unity and healing, and a little known Islamist lawmaker emerged as the politician most likely to choose the country’s next prime minister. Mansour Abbas, leader of the United Arab List, said he was “not in the pocket of anyone” and vowed to listen to offers from anyone willing to talk to him.

Mr. Abbas hails from the Islamic Movement, which was established in 1971 along the lines of the pan-Arab Muslim Brotherhood group. Its primary aim is the Islamization of Arab society, which it pursues through religious outreach and a vast network of charities.

The group split into two branches in 1996 over the question of whether to participate in politics.

The more radical northern branch, led by the firebrand cleric Raed Salah, rejects participation in Israeli politics and has been accused of having close ties to Hamas, the Palestinian militant group that also emerged from the Muslim Brotherhood.

The southern branch, to which Mr. Abbas belongs, has adopted a conciliatory stance toward Israel and is focused more on socio-economic issues than the conflict with the Palestinians. It has allied with secular and left-wing Arab parties in past elections, but has broken with them on issues related to its religious conservatism, such as support for LGBTQ rights.

Arabs make up around 20% of Israel’s population of 9.3 million. They have citizenship, speak fluent Hebrew, and are well-represented in the medical profession and at universities.

But they face widespread discrimination in housing and public services. In recent years they have held regular protests condemning violent crime and accusing Israeli authorities of failing to do enough to protect their communities, allegations rejected by the police.

Even embattled Prime Minister Benjamin Netanyahu, who had previously pledged not to partner with Mr. Abbas, said he would not rule out anyone as a potential governing partner.

“I disqualify no one,” Mr. Netanyahu told supporters early Wednesday. “A stable government for the state of Israel, that is what the times require. … We must not, under any circumstances, drag the state of Israel to new elections.”

Tuesday’s election, like its three recent predecessors, was seen as a referendum on Mr. Netanyahu and his polarizing leadership style.

For supporters, Mr. Netanyahu is the man who is uniquely qualified to lead the country through its numerous political, diplomatic, and security challenges. His opponents see him as a liar and egomaniac who has pushed the country into repeated election cycles in hopes of producing a parliament dominated by supporters who can grant him immunity from his ongoing corruption trial, which resumes April 5.

Once again, the nation appeared to be hopelessly divided. After a protracted period that has included the coronavirus pandemic, a highly successful vaccine rollout, four diplomatic breakthroughs with Arab countries, and a change in the White House, Israelis again voted based on their feelings toward Mr. Netanyahu.

With nearly 90% of the votes counted Wednesday, both Mr. Netanyahu’s supporters and his opponents appeared to fall short of securing the 61-seat majority in parliament required to form a government.

Mr. Netanyahu’s Likud party and its ultra-Orthodox and far-right allies were projected to control 59 seats – even if the small Yamina party were to join it. Yamina’s leader, former Netanyahu ally turned critic Naftali Bennett, has not said which way he will go.

Mr. Netanyahu’s opponents were poised to finish with 61 seats. Even if that projection is upheld by final official results in the coming days, there is no guarantee the anti-Netanyahu parties could form an alternative government. The bloc includes a range of parties – Arab and Jewish, religious and secular, dovish and nationalist toward the Palestinians – that have little in common beyond their distaste for Mr. Netanyahu.

“Assuming all parties and politicians keep up their pre-election promises and the results remain unchanged, then we’re heading toward a fifth election,” said Yohanan Plesner, president of the Israel Democracy Institute, a Jerusalem think tank. “This can be avoided if pre-election promises or pledges are unwound.”

Already, there were signs of this taking place. On Wednesday, just days after Mr. Netanyahu vowed never to cooperate with Mr. Abbas, one of the prime minister’s closest allies, Cabinet Minister Tzachi Hanegbi, praised the Arab lawmaker as it became apparent his small United Arab List had squeaked into parliament.

In a live interview on Channel 13 TV, Mr. Hanegbi called Mr. Abbas a “moderate” and said it would be an “injustice to Israeli society” if he did not get into the Knesset. He told another channel that he considered Mr. Abbas a potential coalition partner.

Other members of Likud, which in past campaigns had depicted Arab citizens as a potential fifth column, reacted angrily to Mr. Hanegbi’s comments. But given his close ties with Mr. Netanyahu, it appeared to be a sort of trial balloon.

Mr. Abbas basked in his newfound fame on Wednesday, appearing on TV screens and radio programs throughout the day. He said he would consider offers from both Mr. Netanyahu and his chief opponent, Yair Lapid, to join a future coalition, possibly even as a Cabinet minister.

He said he would listen to their proposals for addressing problems in Arab society, including poverty, violence, and discrimination, and then make up his mind.

“We will wait patiently. We are not rushing anywhere,” he told Channel 13. “We want to avoid a fifth election, but not at any cost.”

Whether Mr. Abbas can make history and lead an Arab party into an Israeli coalition remains uncertain.

Mr. Netanyahu’s likely coalition partners would include the Religious Zionist party, whose leaders espouse racist anti-Arab views. Some members of the anti-Netanyahu camp have also said they would not share power with Mr. Abbas.

“We are far from seeing Abbas as a Cabinet minister,” said Thabet Abu Rass, co-CEO of the Abraham Initiatives, an advocacy group that promotes coexistence in Israel. “However something new is taking place. There is more legitimization of Arab voters.”

Mr. Abu Rass said the new discourse is about making Israel’s Arab minority, long confined to the political fringe, as partners in decision making. “The question is how to do it and with whom to do it,” he said.

The Israeli election commission was set to begin counting an estimated 450,000 absentee ballots, a higher-than-usual number due to the many people with the coronavirus or in quarantine.

Once those votes are tallied and certified, the country’s figurehead president, Reuven Rivlin, will begin a lengthy process of consulting with party leaders before designating one of them to form a new coalition. That choice is the leader whom he deems has the best chance of being able to put together a government.

Given the deep divisions, this process is expected to take weeks and will require at least one party to compromise its basic values.

In addition to luring Mr. Abbas, Mr. Lapid, for instance, might try to reach a deal with ultra-Orthodox rivals from Mr. Netanyahu’s camp. Both sides might also try to poach renegade lawmakers from the other side, all in a frantic effort to gain or maintain power.

And a fifth election, despite the deep opposition voiced across the political spectrum, remains a strong possibility. In the meantime, Mr. Netanyahu will run a caretaker government with limited powers.

“Regardless of whether Netanyahu forms a government or doesn’t, the deadlock will continue to paralyze the Israeli government as long as Netanyahu remains at the helm,” wrote Yediot Ahronot columnist Nahum Barnea. “This is bad news for every Israeli.”

Hundreds of thousands of COVID-19 antivirals are sitting on…