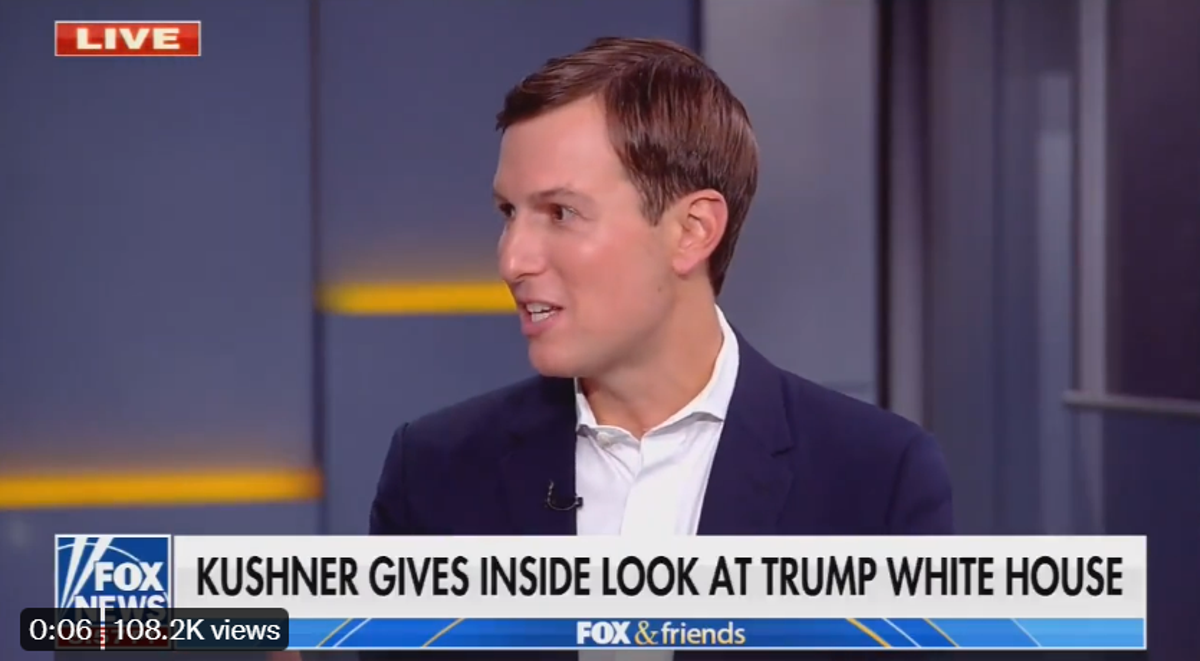 Jared Kushner made a minor slip of the tongue while promoting his memoir, which mistakenly made it seem as though the former senior White House adviser had actually been the most senior figure in the Oval Office.

While appearing on Fox & Friends to promote his new memoir, Breaking History, Mr Kushner made a seemingly innocuous swapping of a first-person pronoun – “I” – with what he likely intended to be his father-in-law’s name when he was discussing his role in the Trump administration as the Middle East point man.

“You take the Middle East, the conventional thinking from John Kerry before I came into office was that there would never be peace between Israel … and the Arabs, until you have peace with the Palestinians,” said Mr Kushner while discussing how he helped broker normalisation of ties with Israel and several Arab nations in his senior advisory role.

The clip, shared on Twitter by freelance journalist Aaron Rupar, was mocked online for seeming to show how unconsciously the former president’s son-in-law viewed his outsized role in the White House, which he received despite not having any previous foreign or political experience to speak of.

“Must’ve been a special election,” tweeted journalist Bruno J Navarro, while others found it incredulous that Mr Kushner, who was appointed by his father-in-law to senior adviser, would unknowingly float that he’d somehow been elected by the people to his role.

“Can someone remind me which office he held?” tweeted one user, echoed loudly by others who tweeted: “What office did Jared Kushner hold!!!???”

Mr Kushner, whose tell-all about his tenure inside the White House was released Tuesday to the public, has been making the rounds this week on mostly right-leaning media outlets as he promotes the book.

Criticisms were also levelled at the husband of Ivanka Trump for purporting on the morning talk show to have been an essential figure in the Trump administration for brokering peace deals in the Middle East, particularly when he is personally being investigated.

“It bears repeating that Kushner had no foreign policy credentials before his father-in-law became president. And considering that his idea of foreign policy is being buds with MBS and receiving largesse from Qatar, he still doesn’t,” said one user who reshared the clip of Mr Kushner unintentionally declaring himself an elected official.

In June, the House Oversight Committee announced it wouldd be launching a probe into a $2bn investment that the Saudi Arabian government gave to a firm created by Mr Kushner, which was deposited in accounts shortly after he departed from the White House last year.

“Your support for Saudi interests was unwavering, even as Congress and the rest of the world closely scrutinized the country’s human rights abuses in Yemen, the murder of journalist Jamal Khashoggi by Saudi assassins tied to Crown Prince Mohammed bin Salman, and Saudi Arabia’s crackdown on political dissidents at home,” wrote the committee’s Democratic Chairwoman Carolyn Maloney.

The investigation is zeroing in on the funds delivered by the sovereign wealth fund of Saudi Arabia, a fund that is controlled by the country’s controversial de facto leader, Crown Prince Mohammed bin Salman, and deposited into Kushner’s firm Affinity.

Specifically at question is whether Mr Kushner’s role inside the Trump administration improperly influenced his personal financial interests, particularly as he took on a significant foreign policy advisory role.

For his part, Mr Kushner has continued to court top officials within the Saudi Arabian government since leaving his “office”. As recently as February, Al Jazeera reported that the former adviser travelled throughout the Persian Gulf region, meeting with both his close friend MBS and top Saudi officials on a trip that mixed personal travel and business.

In response to the original report about the House committee investigating Kushner, first broke by the New York Times, a spokesperson for the former president’s son-in-law said to the newspaper, “While achieving six peace deals in the Middle East, Mr. Kushner fully abided by all legal and ethical guidelines both during and after his government service.”