Most Indian tea pickers are landless. Can their kids make a change? 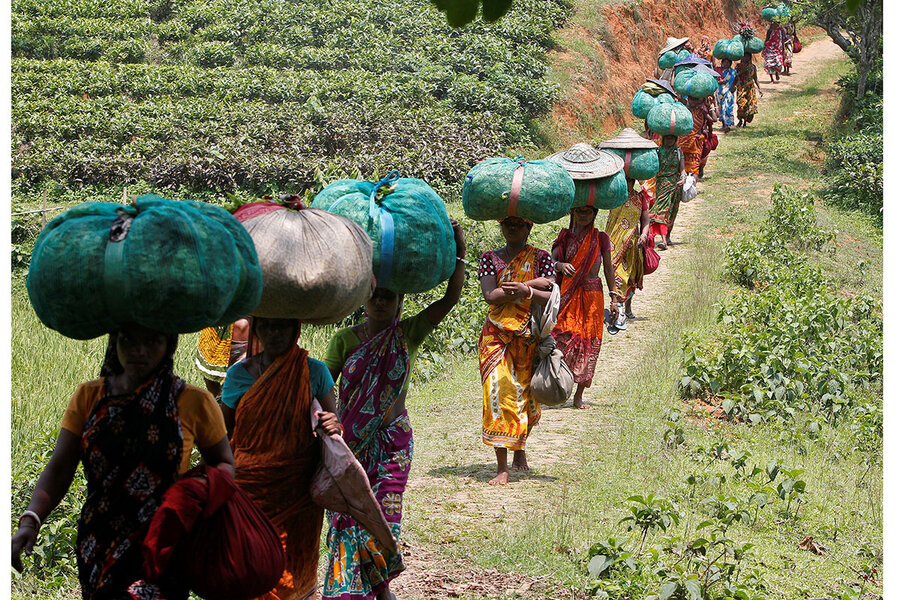 In the green, undulating hills of eastern India that supply the world with Darjeeling tea, revolution is brewing as a new generation dreams of life beyond the confines and hardship of plantation work.

Rahul Kumar Jha is an aspiring writer. But for the past six months he has been running a campaign to win land rights for his father, a tea picker, as he and other young people battle to break an intergenerational cycle of labor.

For nearly two centuries, the children of West Bengal’s tea garden workers have had to take on their parents’ life-long jobs to retain housing tied to plantation labor when their parents retire.

But as members of a better-educated generation nurture career ambitions beyond plucking tea leaves, like Mr. Jha, the long-standing system is facing an unprecedented challenge.

“Workers like my father and grandfather have made these plantations what they are today. How are they not entitled to land here?” Mr. Jha told the Thomson Reuters Foundation from Alipurduar, in West Bengal.

“I did my masters in Hindi to become a writer. I do not want to pluck tea leaves, but generation after generation is forced to work here. … I want to end this cycle of misery.”

About 450,000 people work on tea plantations in West Bengal, and many of them are the descendants of men and women brought here from neighboring states by British planters in the 19th century and put to work in harsh conditions.

With links to their villages severed years ago and daily wages of a little over 200 rupees ($2.75), they neither have ancestral land or a home to return to, and fear losing the only housing they have – labor quarters at the plantation.

‘This is a first’

Education levels in tea gardens have improved in the past few years, with tea firms arranging buses to ferry children to schools, more schools in the vicinity, and nonprofits connecting children with colleges and universities.

“But whatever their degrees, they still have to take up plantation work to retain their house,” said Christian Kharia, president of Uttar Bangla Chai Shramik Sangathan, the tea workers’ collective started by the workers’ children.

This month, the fledgling initiative held a “renaissance rally,” with marchers carrying posters demanding land for plantation workers. They have also given speeches in the tea gardens and posted information on Facebook and WhatsApp.

About 1,000 people – all children of tea plantation workers – have joined the movement, campaigners said. They have filed about 100 applications with officials in the districts of Alipurduar and Jalpaiguri for land titles.

“This is a first,” said Anuradha Talwar, president of Paschim Banga Khet Majoor Samity, a workers’ rights nonprofit supporting the youth movement, which she called “remarkable.”

“They are conscious of their identity of being from the plantation, living here for 100-150 years and not having land rights. They have a desire to do many things to get out of the rut,” she said.

The tea garden workers of West Bengal are mostly women and among India’s 104 million tribal people – also known as Adivasis, or “original inhabitants” – who make up less than 10% of the country’s population and are among its most impoverished.

Labor unions have raised the issue of workers’ wages and their land rights, and tea estates are a mandatory stop for politicians during elections including in the ongoing campaign for a March to May state election.

West Bengal’s government, which owns tea garden land and leases it on long concessions to tea producers, has announced a housing scheme for workers but campaigners said it did not include the promise of land titles.

The state government’s land and land reforms department, and the Indian Tea Association, which represents tea-producing companies, did not respond to emails and phone calls seeking comment.

Nearly a decade ago, 12,000 former tea garden workers living in illegal housing clusters on the plantations were awarded land titles by the state government, and campaigners said such measures should be revived and extended.

“The informal settlements were approved and acknowledged by the government then,” said Pinaki Haldar, India director of programs with global land rights organization Landesa, which led the initiative with the local government.

Far from West Bengal’s tea gardens where she grew up, Delhi University student Fulmoni Munda spotted posts on the land rights movement brewing in her hometown on Facebook and swiftly made contact with members of the collective.

“I’m glad there is a revolution. … What’s the point of our education if we don’t fight now?” said Ms. Munda, who received help from a tribal nonprofit to study in the capital. “This movement will be our new birth.”

But as the young people running the campaign rally support and raise awareness about developments that could threaten their land claims – such as tea-tourism projects and house-building, many of their parents are watching from the sidelines.

Ms. Munda said her parents had “accepted plantation work as their life.”

While many life-long tea pickers are reluctant to challenge the status quo, some are concerned that their children are becoming embroiled in a land rights struggle in their name.

“My father came here in 1932 to work in the plantation and I worked here all my life, but we own nothing here,” said Amarnath Jha, father of the aspiring writer and campaigner Rahul Kumar.

“My son is demanding my land rights and that’s all he works on all day. I worry about him,” he said.

This story was reported by the Thomson Reuters Foundation.