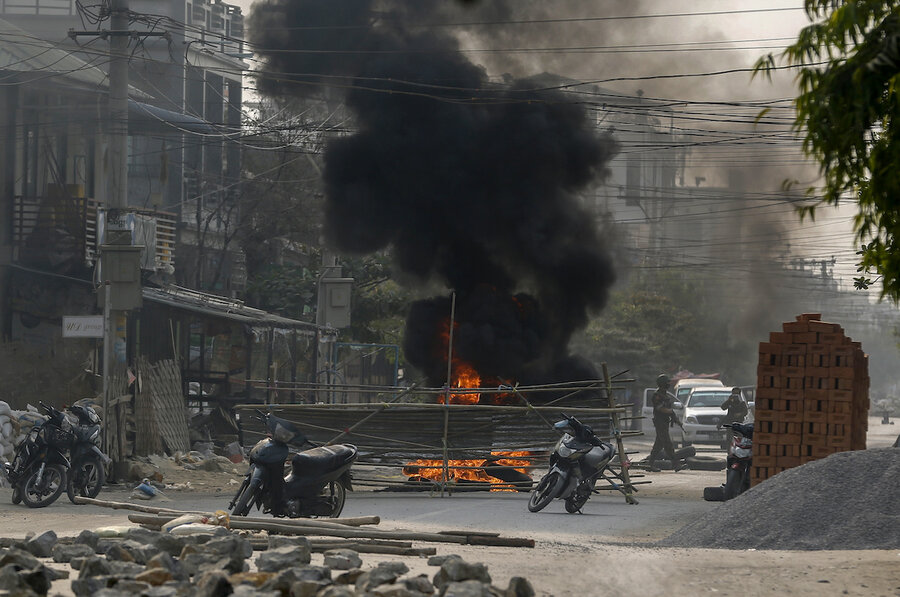 Myanmar’s military junta on Tuesday went on the offensive to justify last month’s coup and subsequent actions against those opposed to it, even as street demonstrations continued against the takeover.

At a news conference in the capital Naypyitaw, the military presented a video of a former political colleague of ousted national leader Aung San Suu Kyi claiming he had handed over large amounts of cash and gold to her personally, in what the military has characterized as corruption. Such allegations were previously denied by her lawyer.

Many of the protests Tuesday were staged in a way that avoided confrontations with authorities, who have not hesitated to use lethal force to break up demonstrations. Some marches were held before dawn in Yangon, the country’s biggest city, and elsewhere and went unmolested. Other protests adopted the tactic of having signboards or other inanimate objects lined up in the street to serve as proxies for human demonstrators.

The independent Assistance Association for Political Prisoners has verified 261 protesters’ deaths nationwide but says the actual total, including cases where verification has been difficult, is probably much higher. It said 2,682 people have also been arrested or charged since the coup, with 2,302 still detained or sought for arrest.

In its news conference, the military presented displays of seized homemade weapons and videos of street battles to argue that the demonstrators are violent and that its efforts to stop them are justified. However, in the weeks since the Feb. 1 coup, protesters only began using organized violence after more than 100 demonstrators had been shot dead by police and soldiers.

The allegations against Ms. Aung San Suu Kyi made by former Yangon Chief Minister Phyo Min Thein were first mentioned by the military several weeks ago. Last week the military-controlled Myawaddy TV station aired a similar video with a construction magnate who also claimed to have made large payoffs to Ms. Aung San Suu Kyi. That video was replayed at Tuesday’s news conference.

No supporting evidence for the allegations has been offered, and they are generally dismissed as an effort by the military to frame Ms. Aung San Suu Kyi so she can be discredited and tried on a serious criminal charge. She is already being held on several more minor charges.

A report in the state-controlled Global New Light of Myanmar newspaper on Tuesday said the junta has expressed fresh concern about civil servants, teachers, and medical workers joining the Civil Disobedience Movement that is the vanguard group opposing last month’s military takeover.

The report referred to the opposition group as CDM, the initials by which it is popularly known. The group encourages employees of key enterprises, such as government offices, to stay away from work.

In what was a relatively conciliatory tone compared with earlier threats, the junta at its Monday meeting was reported to have described failing to show up at work as “not a crime but a violation of the civil service disciplines.” It said that for first offenses, civil servants would have to sign confessions, but further offenses would be dealt with according to civil service rules.

Previously, government employees have been detained for joining the CDM, and striking state railway workers have been kicked out of their government-supplied housing if they don’t agree to go back to work.

Myanmar labor unions on March 7 issued a joint call for an extended nationwide work stoppage, with the goal of a “full, extended shutdown of the Myanmar economy.” In a statement, they called for the strike to continue “until we receive our democracy back.”

Tuesday’s report of the junta’s meeting also highlighted teachers’ absences from work, saying some have joined the CDM, as have health workers.

The junta repeated its claims that civil servants, teachers, and doctors joined the CDM under threat.

“They should make a complaint to the respective authorities about the matter,” said the newspaper’s account of the junta meeting.

“Some teachers and doctors are still absent from work as they are worried that they may face punishment if they return to the unit,” junta chief Senior Gen. Min Aung Hlaing was cited saying.

Although the CDM does not advocate violence, the movement has painted those who don’t give it support as collaborators with the junta with blood on their hands, who may be ostracized.