David Rooney couldn’t believe what he was seeing when he looked out his front window in June and saw a Bell Canada contract employee aiming a high-pressure water excavator — the same one he’d been using to dig holes in the ground — at Rooney’s car, peeling the paint right off.

“There was quite a wash of water, probably 10 feet high,” Rooney told Go Public. “So I came up to find that he’s washing my car and asked him to stop immediately.”

After accidentally splashing mud on Rooney’s 2012 Hyundai Genesis, which was parked in the driveway, the worker used a power tool called a hydrovac excavator to try to clean it off. The worker was one of hundreds Bell hired to install fibre optic lines across the country, including on Rooney’s street.

Rooney figured getting compensation would be simple. After all, the worker admitted it was his fault.

Instead, Rooney spent the next seven months battling both Bell and the company it hired to do the work on its behalf, Super Sucker Hydro Vac Service, for the cost of the damage.

In many cases, property owners have no choice but to allow telecommunications companies on to their property. Land titles often include rights of way which allow city workers and other service providers to come onto a property when doing work considered essential.

But when that work leads to damage, consumers are often treated like a “hot potato” that none of the companies involved want to compensate, says John Lawford, the executive director of the Public Interest Advocacy Centre, a non-profit organization that provides legal and research services on behalf of consumers.

“There’s a very low likelihood of getting any money back if the company or the telco resists paying you … chances are you’re going to get nothing [or] face a legal battle if you want to fight it,” Lawford said.

Rooney says when his car was damaged, Bell refused to offer any compensation and pointed him to Super Sucker. That company passed him to its insurance provider, Federated Insurance.

“And they said that I should not be dealing with them, but going to my own insurance company. So I called my insurance company and found that I have a $500 deductible that will come out of pocket. I didn’t think that was fair,” he said. 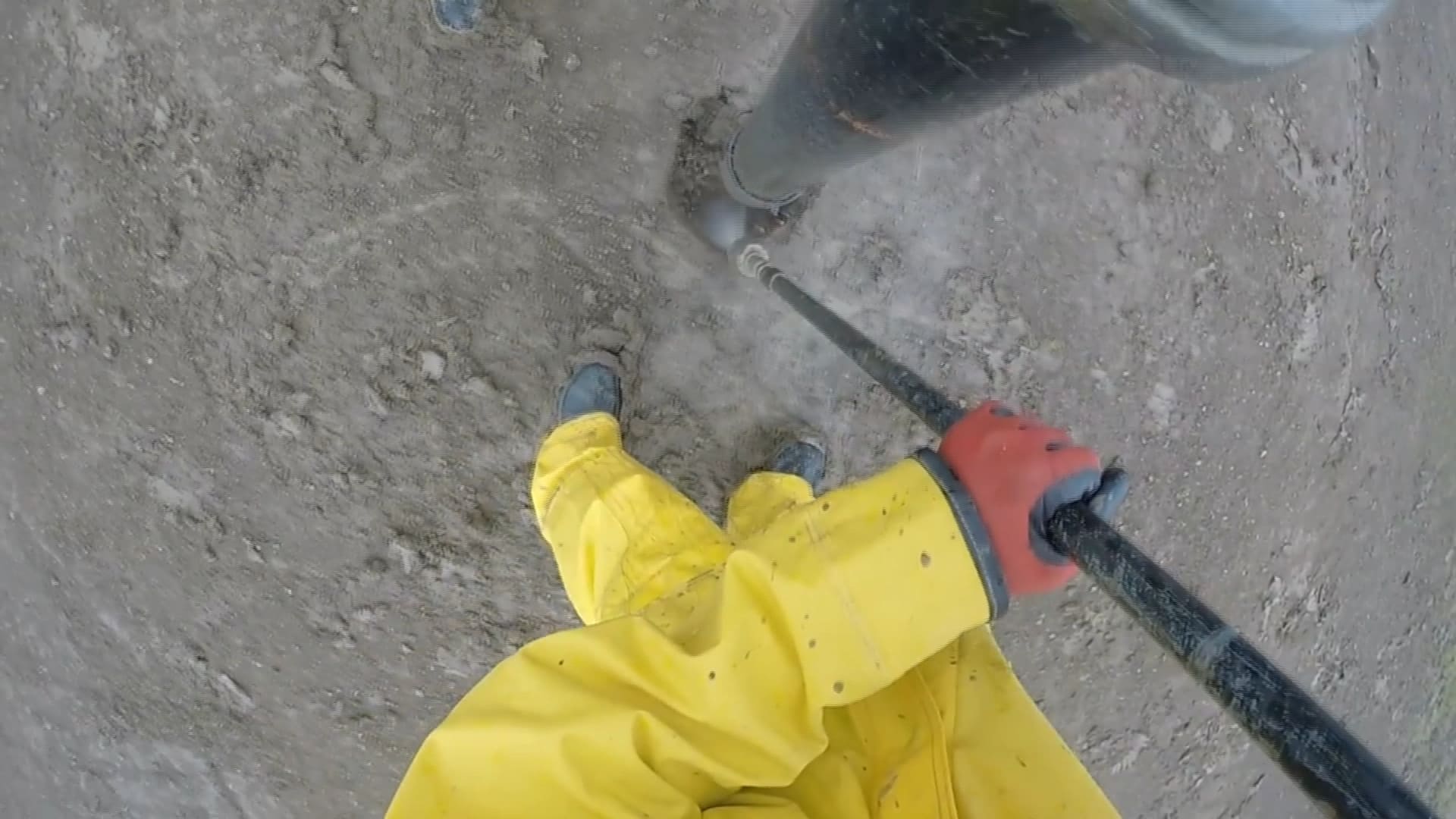 A worker demonstrates a hydrovac, an excavating tool that uses high-pressure water to loosen dirt and suck the resulting slurry out of the ground. 0:26

In an email to Go Public, Super Sucker spokesperson Mark Elias says the issue should have been settled by the insurance companies.

“This is not a matter that should be handled by anyone internally or by Mr. Rooney himself — that’s why we pay for insurance in the first place, not only to cover any of the financial costs of an incident but to handle the whole process from start to finish,” Elias wrote.

Bell spokesperson Nathan Gibson says the company’s contractors are “ultimately responsible” for resolving complaints when they do damage and says Bell provides oversight until there is resolution.

But in Rooney’s case, Gibson says the situation wasn’t handled to the company’s standards and that the contractor didn’t meet its obligations.

It says it apologizes to Rooney for his experience. “There was a serious issue with communication from our contractor and we have addressed the incident with them,” Gibson wrote in an email to Go Public.

‘It’s happening all the time’

Rooney got his money, but Grace McLeod of Brantford, Ont., is still waiting for Bell to pay up.

McLeod isn’t even a Bell customer — her internet provider is Rogers.

But when Bell employees installed underground fibre optic lines on her condo property in September, they cut the Rogers lines, cutting off McLeod’s internet service and leaving her unable to work for the day.

“So I said to the three guys working next to the hydro box, ‘Are you guys from Bell Canada? And they said, yes. And I said, ‘Did you just cut my Rogers lines?’ And they said, no,” McLeod told Go Public.

But a few hours later, she says a Rogers technician confirmed the lines had been cut, telling her it’s happening “all the time.”

McLeod — who works in collections — tried to get Bell to pay for the wages she lost when she wasn’t online working, but was told no since she’s not a Bell customer.

“Every step I took I was stonewalled, and I guess that’s how they get rid of people because they stonewall you,” she said.

Gibson, the Bell spokesperson, says the company did all the checks required to find lines belonging to its competition, but “no cable location information was provided.”

“Bell cannot be responsible for such a break,” Gibson wrote.

“If Mrs. McLeod had been a Bell customer, we could have credited her account for the temporary loss of service, but would not offer compensation for additional claims such as lost wages.”

Bell says it’s about halfway through a major project that involves installing fibre lines to service as many as 10 million homes in seven provinces.

The company says it has a “straightforward and reliable” complaint process that “works very well even considering the extraordinary volume of our activity.”

‘Many barriers’ to compensation

Legally, Lawford says both Bell and the third-party companies it hires to do its work are potentially liable for damage. Proving lost wages is more difficult, he says.

But getting compensation can be tough if the companies don’t co-operate.

For one, Canada’s telecom mediator, the Commission for Complaints for Telecom-Television Services (CCTS), doesn’t deal with property damage or lost wage complaints, so customers are left dealing directly with the companies, going to small claims court or hiring a lawyer.

The last two options can be intimidating, time consuming and expensive, says Lawford — leading many people to give up.

Bell’s terms of service also cap compensation for damage at $20 or an amount equal to what customer paid for the service during the time it was unavailable.

“Is this really a conversation we should be having about which person catches the hot potato? Shouldn’t it be the consumer getting redress for something that it doesn’t really matter whose fault, strictly speaking, it is legally?” he said. “We need a fix.”

Go Public asked Bell how many property owners have been compensated for property damage and how much it has paid out over the last five years. It didn’t answer.

The CCTS says it’s received 180 reports of property damage from customers over the last five years related to the installation of services by telecoms or their contractors.

“I would suspect it’s happening often because there are millions of installs and repairs going on,” he said.

The fix, he says, is expanding the role of the CCTS to deal with property access and damage.

He points to Australia, where the Telecommunications Industry Ombudsman (TIO) has been resolving rights of way and property damage disputes between customers and telecoms for more than a decade.

“There’s no real reason to not have that in Canada,” he said.

It has the power to make binding decisions up to about $50,000 and can direct a telecommunications carrier to compensate a landowner for reasonable costs associated with fixing any damage caused to their property.

Telecommunications carriers and eligible service providers are required to be members of the TIO and fund its operation.

Lawford says it shouldn’t be hard to set up a system like the one in Australia, since Canadian telecoms already have to pay CCTS membership fees annually.

The amount is based on the size of the company, and if you have higher complaint numbers, you pay a bit more.

Rooney supports the idea of a telecom-funded system that deals with complaints like his, so does McLeod.

McLeod is one of those rare cases where the telecom providers need her permission to go onto the property, and she says she’ll never give it again.

“I have a sign out there on my letter box,” she said. “If they come back, I’ll ask the police to have them removed because I truly don’t want any more damage, especially if they’re not going to stand behind what they do.”

Bell says it will honour her request.

Go Public is an investigative news segment on CBC-TV, radio and the web.

We tell your stories, shed light on wrongdoing and hold the powers that be accountable.

If you have a story in the public interest, or if you’re an insider with information, contact GoPublic@cbc.ca with your name, contact information and a brief summary. All emails are confidential until you decide to Go Public.

6 Dr. Seuss books will no longer be published due to racist imagery