What Credit Score Is Needed to Buy a House? It Varies by…

For the generation comfortable communicating using only emojis or through TikTok videos, it’s a baffling sight still found in many offices: a bulky photocopier-type machine hooked up to a telephone line.

A relic of an era when the “web” was still something spiders spun, the fax machine has withstood the advent of email, text and instant messaging to live on in several sectors, including health care. But its continued use carries extra costs and even risk.

And in Ontario, the government says it’s finally time to cut the cord. Finance Minister Peter Bethlenfalvy says he’s directing the province’s public service to phase out its 1,500 traditional telephone fax lines by the end of the year.

“I heard one go off a few months ago, and I said, ‘Folks, we’ve got to move this province forward,'” Bethlenfalvy recalled in an interview with CBC News.

For readers more familiar with Instagram than gramophones, now is a good time to clear up two things. A fax machine is a device that scans paper, then transmits the image of the page, using a land line, to another fax machine, which then typically prints out a copy. And The Flintstones was a cartoon set in the Stone Age.

An early version of the fax (short for “facsimile”) was invented in 1843, but it wasn’t until the 1980s that the devices became commonplace in Canadian offices. In 1988, CBC reported that “What’s your fax number?” had become one of the most frequently asked questions in business.

More than three decades later, many consider the fax obsolete. Facebook recently took out newspaper ads directed at U.S. lawmakers with the tagline, “The last time internet regulations were passed, people said, ‘Fax it to me,'” alluding to 25 years ago.

Many people, it turns out, still say that. 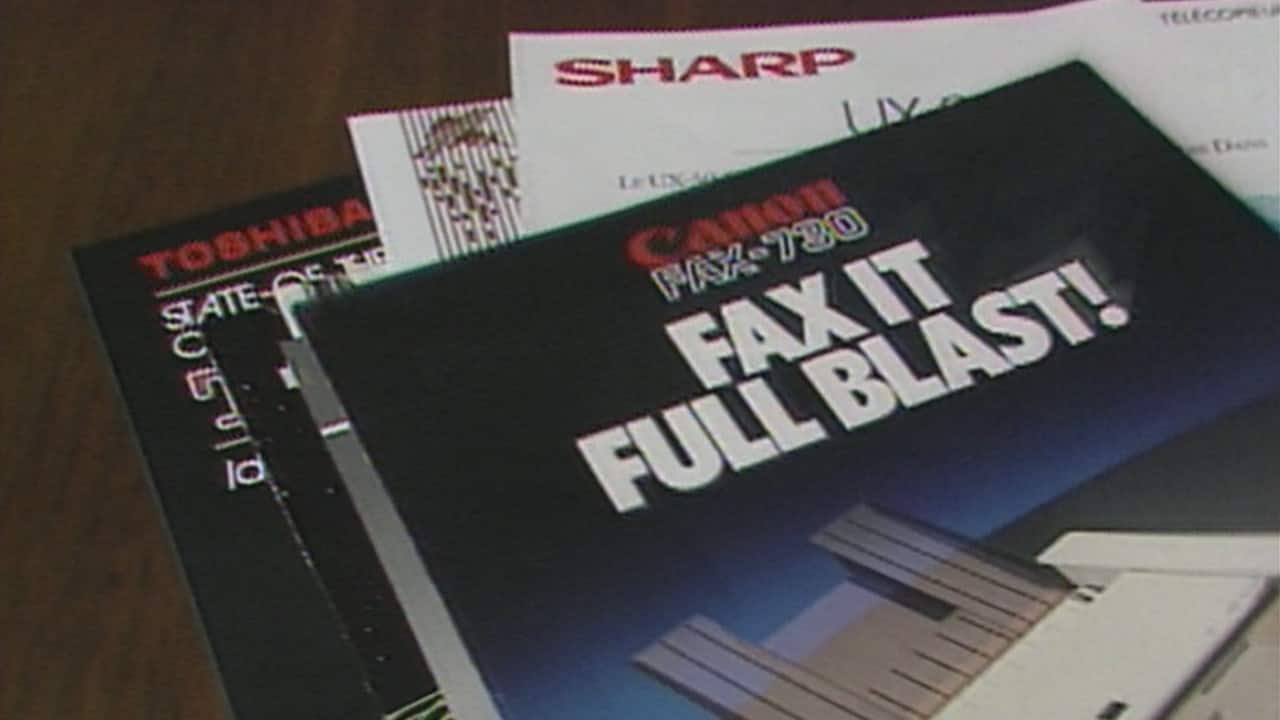 A new generation of small fax machines has the industry eyeing new markets in 1988. 3:46

The COVID-19 pandemic has cast a spotlight on the health care sector’s reliance on faxes. Doctors still submit prescriptions to pharmacies that way, for example.

And the old-fashioned approach has recently shown it has limits.

In New Brunswick, a fax backlog last November resulted in a people spending days in isolation waiting for COVID-19 test results. The holdup partly stemmed from the machine’s capacity to receive only one message at a time, at a speed of about 130 seconds per page.

And it’s far from alone in its use of the device.

He said hospitals may very well have modern electronic patient records, “but when they send your patient record to your family physician, they may have to fax it directly from a computer PDF file to a paper fax” to align with the office’s workflow.

In 2016, Nova Scotia’s privacy commissioner urged doctors to move away from faxing patient referrals after a spa owner kept receiving sensitive patient information by mistake. Her business’s fax number was the same as that of a local mental health clinic, except for one digit.

Britain’s health secretary ordered the National Health Service to stop buying fax machines in 2018 in a bid to phase them out entirely by the end of March 2020. It’s unclear whether the pandemic upended that plan.

“It’s about a mindset change through all the Ontario public service about how we engage with citizens and how we embrace technology that’s private and secure,” said Bethlenfalvy, who also serves as the province’s minister responsible for digital and data transformation.

For those who still use fax, it can have benefits. Traditional paper-to-paper machines appeared virtually unhackable since they were based on analog technology, although messages could still be theoretically intercepted over the phone line. This offered a simple way to transmit confidential information directly to another device.

Some sectors, including real estate, now rely heavily on password-protected electronic documents with virtual signatures rather than faxed paper.

But the biggest disincentive for fax users to make the transition to more modern technology appears to be: if it still works, why bother changing now?

Jonathan Coopersmith wrote Faxed: The Rise and Fall of the Fax Machine, and he suggests getting rid of them is easier said than done.

Asked whether the government would be providing civil servants with a plan to gradually phase in alternative technology instead of the fax, Bethlenfalvy said there are “so many tools to ship information back and forth.” He pointed to electronic forms and signatures and digital document management.

As it stands, the Ontario government’s website still lists fax among the ways to get in touch and specifies that it will reply within 15 business days.

The minister declined to estimate the costs associated with running 1,500 fax machines.

Coopersmith, a history professor at Texas A&M University, said the pandemic has highlighted how little attention organizations have given to co-ordinating the flow of information.

Environment a chief suspect in mystery neurological disease found only in N.B.