Over nuclear weapons’ negotiations, N. Korea spars with the US 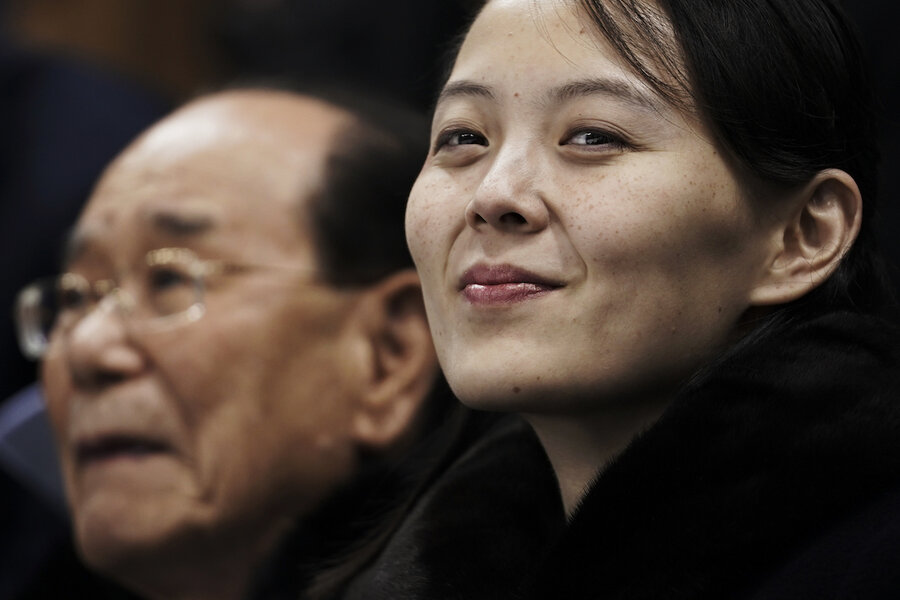 After giving the Biden administration the silent treatment for two months, North Korea this week marshalled two powerful women to warn Washington over combined military exercises with South Korea and the diplomatic consequences of its “hostile” policies toward Pyongyang.

The frustration and belligerence, however, may actually be an overture.

North Korea’s first comments toward the new United States government, while filled with angry rhetoric, can be seen as the start of a diplomatic back-and-forth as the North angles to get back into stalled talks aimed at leveraging its nuclear weapons for badly needed economic benefits.

The timing of the North Korean statements was carefully chosen, with the comments landing on front pages and newscasts as U.S. Secretary of State Antony Blinken and Defense Secretary Lloyd Austin traveled to Asia for talks with U.S. allies Tokyo and Seoul about the North Korean threat and other regional challenges.

Whether any negotiations happen may depend on the Biden administration’s policy review on North Korea, which is expected to be completed in coming weeks.

What North Korea is saying

Describing the drills as an invasion rehearsal, Kim Yo Jong warned Washington to “refrain from causing a stink” if it wants to “sleep in peace” for the next four years.

North Korean First Vice Foreign Minister Choe Sun Hui said in a statement Thursday that the North will continue to ignore U.S. offers for talks unless it abandons what the North describes as hostile policies.

Ms. Choe was responding to Mr. Blinken’s comments this week that Washington reached out to the North through several channels starting in mid-February but hasn’t received any response.

“What has been heard from the U.S. since the emergence of the new regime is only a lunatic theory of ‘threat from North Korea’ and groundless rhetoric about ‘complete denuclearization,’” Ms. Choe said, calling the American offers for talks a “time-delaying trick.”

Ms. Choe’s statement could be an attempt by the North to create an environment to re-enter nuclear negotiations from a position of strength, according to Shin Beomchul, an analyst with the Seoul-based Korea Research Institute for National Strategy.

Negotiations between Washington and Seoul have stalled for more than two years since the collapse of nuclear summitry between Kim Jong Un and former U.S. President Donald Trump in 2019. The two sides disagreed over the details of a plan to exchange sanctions relief for disarmament. Pyongyang has repeatedly claimed it won’t engage in meaningful talks while Washington persists with sanctions and pressure.

But North Korea could also be gearing up for harsher words for the Biden administration over Mr. Blinken’s repeated condemnation in Seoul of the North’s human rights record, something Mr. Trump largely ignored while pursuing media-friendly summits with Mr. Kim. That could complicate any future negotiations

The North is extremely sensitive to outside criticism over its abysmal human rights conditions, which it sees as an attack on its leadership, and Ms. Choe’s statement appeared to be crafted before the North could decide on a response to Mr. Blinken’s remarks.

Most experts agree that the North will eventually attempt to return to negotiations to try to win aid, but they differ over when – and what it would take for talks to resume.

Mr. Kim has recently been defiant about advancing a nuclear arsenal he sees as his strongest guarantee of survival. He has also urged his people to be resilient in the struggle for economic self-reliance while launching a new multiyear plan to salvage his broken economy.

Mr. Kim’s focus on his domestic economic drive could mean that the North stays away from talks for another year and comes back only after it becomes clear that Mr. Kim’s new policies are failing, Mr. Shin said.

“If North Korea is really desperate for a quick resumption of talks, they would test-fire an intercontinental ballistic missile around April 15,” the birthday of Mr. Kim’s state-founding grandfather Kim Il Sung, to pressure Washington into talks, Mr. Shin said.

But he said it’s more likely that the North will avoid provoking the Biden administration – and inviting more pressure – because Mr. Kim’s priority is to quietly cement his country as a nuclear power, which is also a key purpose of his domestic economic drive.

The North might still try to conduct short-range test launches that threaten South Korea but not the American homeland. But, Mr. Shin said, “they will keep any dramatic action on hold at least until the Biden administration’s North Korea policy review is out.”

Mr. Kim must navigate the tricky relationship with Washington while his nation faces sanctions, pandemic border closures and crop-killing natural disasters that may be pushing the North toward worse economic instability.

Whatever moves the North makes, its recent messages signal that it won’t return to talks unless the U.S. offers at least some level of sanctions relief. That, however, is unlikely to happen without a meaningful cutback in Mr. Kim’s nuclear capabilities.