“People will become more radical”: Senegal and the limits of protest Senegal has a rich history of social movements, but they have so far done more resolve conflicts in the political oligarchy than open up new horizons. 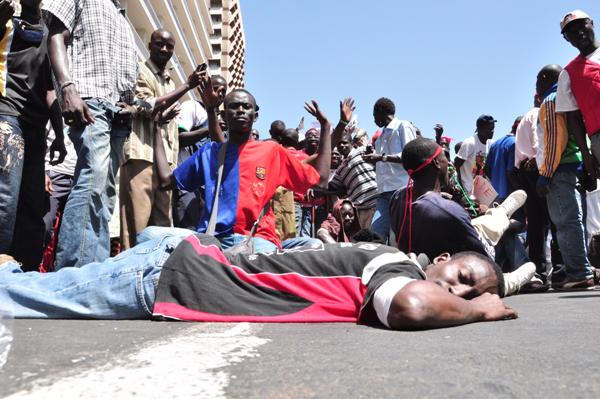 Senegal’s radical movements have forced change many times in the nation’s history. In 1968, for instance, student strikes snowballed into a mass nationwide uprising that forced then President Leopold Senghor to call in French military support to suppress the protests. In 2000, popular mobilisations buttressed a peaceful change of power at the ballot box. And in 2012, the imaginative Y’en a marre movement brought young people to the streets and voting booth to usher in another momentous transition.

Ten years on from that latest victory, which brought Macky Sall to power, the president is deeply unpopular. And, for the first time in Senegal, the ruling coalition lacks an outright majority after voters punished the government in the July 2022 parliamentary elections.

Leo Zeilig, an editor at ROAPE, spoke to Ndongo Samba Sylla about the situation in Senegal, the place of social movements today, and the figure of Ousmane Sonko who has galvanised much opposition support. Sylla is the Research and Programme Manager for the Rosa Luxemburg Foundation and editor and author of several books including The Fair Trade Scandal.

Can you tell us about the social movements in Senegal and their relationship with political parties?

In the volume I edited on social movements in West Africa, I identified five major logics of protest: liberal (campaigns to defend minority rights); corporatist (e.g. some of the campaigns led by trade unions, students); proletarian (e.g. working class campaigns against the high cost of living or land grabs); republican (e.g. campaigns for public accountability, respect for the constitution); and cross-cutting (combining different elements of the above).

In Senegal, as so often in West Africa, republican campaigns mobilise the greatest numbers and attract the widest support. Generally during these campaigns, social movements and ordinary people offer support to opposition parties. Neither necessarily shares the political agenda or ideology of the opposition parties, but they accept an alliance in the name of the common good. This has often been the case in Senegal. For instance, the Y’en a Marre movement, which embodied the face of protest against then President Abdoulaye Wade in 2011-12, contributed indirectly to his replacement at the ballot box by Macky Sall in 2012. Today, however, this movement is experiencing a rocky relationship with the Sall regime.

The Senegalese have always been actively involved in the major moments of national life. They’ve acted as a democratic brake on despotic excesses from Senghor to Sall and have facilitated two peaceful transfers of political power, in 2000 and 2012. However, we should not be too idealistic. In my view, the social movements are not radical enough in their demands.

The cyclical recurrence of the issues that provoke popular mobilisations (e.g. the presidential “third term”) demonstrate this lack of radicalism. This shows that no sustainable solution – one that struck at the root of the issue – was found to a problem that provoked previous campaigns. The social movements also often operate in “reformist” mode, improving a dysfunctional system rather than laying the groundwork for an alternative democratic politics. Even while acknowledging the limitations of the political parties, they seldom question the electoral system that underpins the power of those parties. By failing to challenge the right to govern of the dominant political parties, movements cede the political initiative. Once in power, former opposition parties are not obliged to implement the reforms advocated by the social movements.

While Senegal’s social movements play an important role as political regulators, in practice they’ve done more to resolve conflicts within the political oligarchy than open up new horizons for a genuine democratic politics. However, given the inequalities and suffering linked to the Senegalese model of growth without development, we can expect that people will become more radical in their demands. This is especially true of economic demands, such as access to decent employment, which politicians continue to ignore.

The opposition figure Ousmane Sonko has spoken widely of popular transformation. How seriously should we take his national development project?

In recent years, Sonko has become the phenomenon of Senegalese politics. The former tax and property inspector became known to the general public as a whistleblower over issues of financial transparency. He became a member of parliament in 2017 and came third in the 2019 presidential elections with 15%. He has subsequently gathered political momentum and established himself as the leader of Senegal’s opposition. After initially presenting himself as a pragmatist who transcends the usual ideological divides, Sonko has gradually developed his pan-Africanist credentials and given a more left-wing focus to his political discourse.

A rape allegation still pending before the Senegalese courts was the pretext grabbed by the current regime to eliminate him from politics. But this attempt failed when Sonko called on supporters to resist tyranny. Against a backdrop of the various frustrations caused by measures taken to combat Covid-19, young people responded in a massive nationwide mobilisation over five days in March 2021. The situation spiralled out of control, demanding a political solution beyond the capacity of an overwhelmed police force. Sall broke his silence and released Sonko in an attempt to bring calm.

Since then, Sonko’s popularity has continued to grow, especially among young people and members of the diaspora. They believe in his project to set Senegal on the road to transparency, good government, and a form of development based on reclaiming the instruments of sovereignty, including the currency.

Sonko is thus the champion of everyone who aspires to a Senegal with greater autonomy from France, including some left-wing parties and movements. For his supporters, he represents the hope of building a new Senegal that might extend its example to the rest of the continent. For his fiercest opponents, notably the proponents of the neocolonial order, he is the greatest threat they have faced.

Tensions seem likely to remain high between now and the February 2024 presidential election. Sall still refuses to say if he intends to stand, although he is now in his second, and in principle final, term in office.

This piece is an edited extract from the full interview on ROAPE.net, translated by Maggie Sumner.