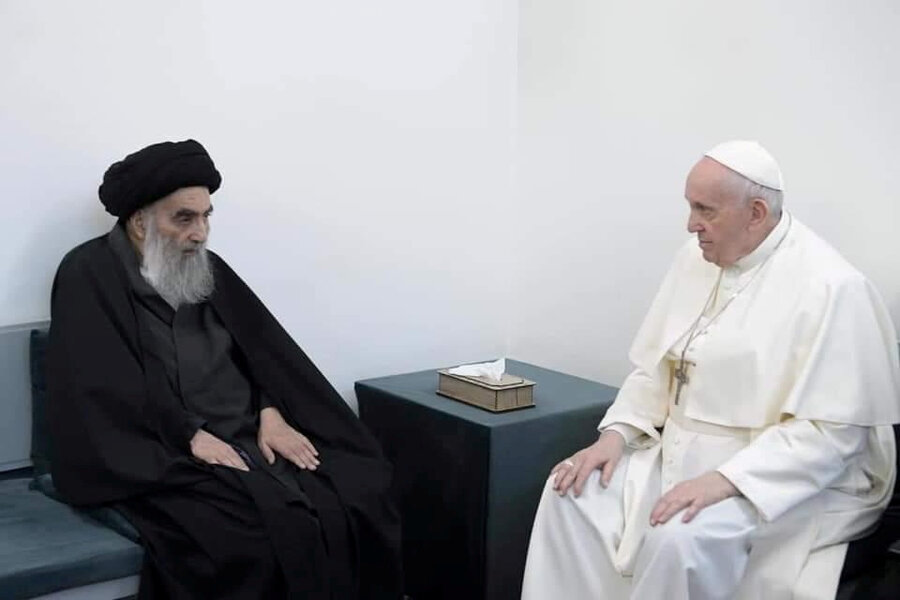 Plains of Ur, Iraq

Pope Francis walked through a narrow alley in Iraq’s holy city of Najaf for a historic meeting with the country’s top Shiite cleric Saturday, and together they delivered a powerful message of peaceful coexistence in a country still reeling from back-to-back conflicts over the past decade.

In a gesture both simple and profound, Grand Ayatollah Ali al-Sistani welcomed Pope Francis into his spartan home. The cleric, one of the most eminent among Shiites worldwide, afterward said Christians should live in peace in Iraq and enjoy the same rights as other Iraqis. The Vatican said Pope Francis thanked Grand Ayatollah Sistani for having “raised his voice in defense of the weakest and most persecuted” during some of the most violent times in Iraq’s recent history,

Later in the day, the pope attended a gathering of Iraqi religious leaders in the deserts near a symbol of the country’s ancient past — the 6,000-year-old ziggurat in the Plains of Ur, also the traditional birthplace of Abraham, the biblical patriarch revered by Jews, Christians and Muslims. The joint appearance by figures from across Iraq’s sectarian spectrum was almost unheard-of, given their communities’ often bitter divisions.

Together, the day’s events gave symbolic and practical punch to the central message of Pope Francis’ visit, calling for Iraq to embrace its diversity. It is a message he hopes can preserve the place of the thinning Christian population in the tapestry. At a Mass the pope celebrated later in Baghdad, emotional worshippers sang hymns, ululated and shouted “Viva la Papa!,” or “Long live the pope” – a rare public moment of joy among a population weighed down by turmoil, economic woes and the coronavirus pandemic.

Still, his message faces a tough sell in a country where every community has been traumatized by sectarian bloodshed and discrimination and where politicians have tied their power to sectarian interests.

In Ayatollah Sistani, Pope Francis sought the help of an ascetic, respected figure who is immersed in those sectarian identities but is also a powerful voice standing above them.

Ayatollah Sistani is one of the most senior clerics in Shiite Islam, deeply revered among Shiites in Iraq and worldwide. His rare but powerful political interventions have helped shape present-day Iraq. Their meeting in Ayatollah Sistani’s humble home, the first ever between a pope and a grand ayatollah, was months in the making, with every detail painstakingly negotiated beforehand.

Early Saturday, traveling in a bullet-proof Mercedes-Benz, pulled up along Najaf’s narrow and column-lined Rasool Street, which culminates at the golden-domed Imam Ali Shrine, one of the most revered sites in Shiite Islam. He then walked the few meters down an alley to Ayatollah Sistani’s home.

A religious official in Najaf called the meeting “very positive.” He spoke on condition of anonymity because he was not authorized to brief media.

The official said Ayatollah Sistani, who normally remains seated for visitors, stood to greet Pope Francis at the door of his room. The pope removed his shoes before entering Ayatollah Sistani’s room and was served tea and a plastic bottle of water.

In a statement issued by his office afterward, Ayatollah Sistani affirmed that Christians should “live like all Iraqis, in security and peace and with full constitutional rights.” He pointed out the “role that the religious authority plays in protecting them, and others who have also suffered injustice and harm in the events of past years.”

Ayatollah Sistani wished Pope Francis and the followers of the Catholic Church happiness and thanked him for taking the trouble to visit him in Najaf, the statement said.

Iraqis cheered the meeting, and the prime minister responded to it by declaring March 6 a National Day of Tolerance and Coexistence in Iraq.

”We welcome the pope’s visit to Iraq and especially to the holy city of Najaf and his meeting with Grand Ayatollah Ali al-Sistani,” said Najaf resident Haidar Al-Ilyawi. “It is a historic visit and hope it will be good for Iraq and the Iraqi people.”

Iraq’s Christians, battered by violence and discrimination, hope a show of solidarity from Ayatollah Sistani will help secure their place in Iraq and ease intimidation from Shiite militiamen against their community.

Ayatollah Sistani’s voice is a powerful one, often for moderation. But his word is not law. After 2003, he repeatedly preached calm and restraint as the Shiite majority came under attack by Sunni extremists. Yet brutal Shiite reprisals against Sunni civilians fed a years-long cycle of sectarian violence.

His 2014 fatwa, or religious edict, calling on able-bodied men to join the security forces in fighting the Islamic State group helped ensure the extremists’ defeat. But it also swelled the ranks of Shiite militias, many closely tied to Iran and now blamed for discrimination against Sunnis and Christians.

Later, Pope Francis evoked the common reverence for Abraham to speak against religious violence at the inter-faith gathering at the Plains of Ur, near the southern city of Nasiriyah.

“From this place, where faith was born, from the land of our father Abraham, let us affirm that God is merciful and that the greatest blasphemy is to profane his name by hating our brothers and sisters,” Pope Francis said. “Hostility, extremism and violence are not born of a religious heart: they are betrayals of religion.”

Such interfaith forums are a staple of Pope Francis’ international trips. But its sectarian breadth was startling in Iraq: From Shiite and Sunni Muslims to Christians, Yazidis and Zoroastrians and tiny, ancient and esoteric faiths like the Kakai, a sect among ethnic Kurds, Mandaeans, and Sabaean Mandaeans.

The Vatican said Iraqi Jews were invited to the event but did not attend, without providing further details. Iraq’s ancient Jewish community was decimated in the 20th century by violence and mass emigration fueled by the Arab-Israeli conflict, and only a handful remain.

Ali Thijeel, a Nasiriyah resident who attended the event, said he hoped the pope’s visit would encourage investment in the area to attract pilgrims and tourists. “This is what we were waiting for,” he said. “This is a message to the government and politicians. They should take care of this city and pay attention to our history.”

Pope Francis’ visit – his first international trip since the start of the coronavirus pandemic – included celebrating Mass in Baghdad later on Saturday.

“Love is our strength, the source of strength for those of our brothers and sisters who here too have suffered prejudice, indignities, mistreatment and persecutions for the name of Jesus,” Pope Francis told the faithful.