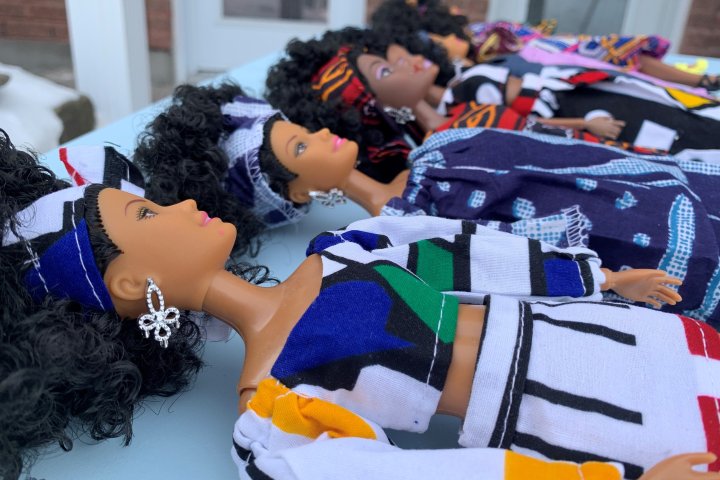 Two Quebec fathers — friends since they were children — are taking on the lack of diversity in children’s toys head-on.

They’ve launched a line of playthings that they say promotes diversity but goes beyond skin colour.

“We want to change the world,” said Gaëtan Etoga from outside his home in Greenfield Park, south of Montreal.

Both he and his childhood friend, Yannick Nguepdjop, say there aren’t enough Black dolls available and the ones they do find are too expensive. The men co-founded the company YMMA, which sells the dolls.,

“That was the problem we wanted to solve,” explained Etoga.  “So we wanted to make them affordable for everyone.”

They also want to boost the confidence of Black kids by making dolls that look like them available.

“For them to know that they are beautiful like they are,” Nguepdjop told Global News from Pintendre, east of Quebec City.

The childhood buddies point out that they want to go beyond that though.  Both are from Douala, Cameroon.  To promote African cultures, the dolls are outfitted  in traditional African fashion.

“We design and manufacture the clothes in Cameroon in Africa, in order to support the local economic industry,” said Nguepdjop.

The clothes are shipped from Douala to Montreal where the dolls, imported from China, are packaged.  Both fathers say they hope their project will expose children of all races to different cultures.

Read more:
Anti-Black racist incidents a growing cause for concern for Montreal families

The men began selling the items online in December, and in that time they claim to have sold hundreds to families in Quebec, Ontario, as well as the United States, France, and Australia.

Etoga and Nguepdjop say they deplore the lack of diversity in various spheres in society and see this project as their way of helping to change that.

“We choose to address this in the toy spaces because the children are the future,” Etoga pointed out.

The men say that they want to expand the diversity of their dolls further eventually.

Pandemic Leads to Increased Violence Against Women in Mexico