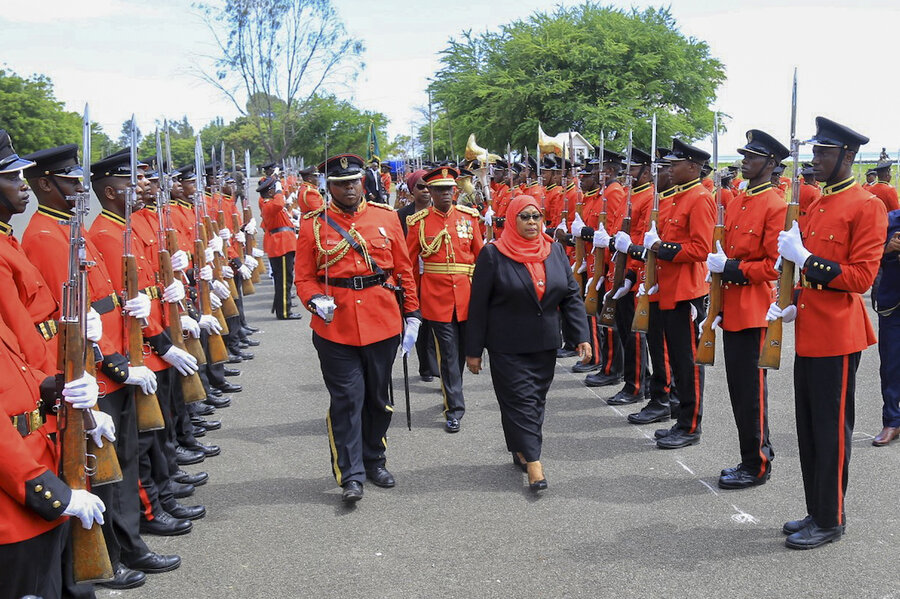 Samia Suluhu Hassan made history Friday when she was sworn in as Tanzania’s first female president two days after the death was announced of her controversial predecessor, John Magufuli, who denied that COVID-19 is a problem in the East African country.

Wearing a hijab and holding up a Quran with her right hand, Ms. Hassan took the oath of office at the government offices in Dar es Salaam, the country’s largest city.

The inauguration was witnessed by Cabinet members and Tanzania’s former presidents Ali Hassan Mwinyi and Jakaya Kikwete and former vice president Abeid Karume. The former heads of state were among the few people in the room wearing face masks to protect against COVID-19.

Ms. Hassan succeeds Mr. Magufuli, who had not been seen in public for more than two weeks before his passing was announced. Mr. Magufuli had denied that COVID-19 was a problem in Tanzania, saying that national prayer had eradicated the disease from the country. But weeks before his death, Mr. Magufuli acknowledged the virus was a danger.

A major test of Ms. Hassan’s new presidency will be how she deals with the pandemic. Under Mr. Magufuli, Tanzania, one of Africa’s most populous countries with 60 million people, made no efforts to obtain vaccines or promote the use of masks and social distancing to combat the virus. This policy of ignoring the disease endangers neighboring countries, African health officials warn.

“The immediate job, the immediate decision she has to make, and she doesn’t have much time for it, is what is she going to do about COVID-19?” Mr. Lissu told The Associated Press in Belgium, where he lives in exile.

“President Magufuli defied the world, defied science, defied common sense in his approach to COVID-19 and it finally brought him down,” said Mr. Lissu.

“President Samia Saluhu Hassan has to decide very soon whether she is changing course or continuing with the same disastrous approach to COVID-19 that her predecessor took,” said Mr. Lissu.

Ms. Hassan must also decide how she will address Mr. Magufuli’s legacy, said Mr. Lissu. He said she must decide to continue with Mr. Magufuli’s policies which took Tanzania from a relatively tolerant democracy to a repressive state. He questioned if she will be able to restore the country’s political freedoms and democracy.

Speaking at her inauguration, Ms. Hassan gave little indication that she intended to change course from Mr. Magufuli.

“It’s not a good day for me to talk to you because I have a wound in my heart,” said Ms. Hassan, speaking in Swahili. “Today I have taken an oath different from the rest that I have taken in my career. Those were taken in happiness. Today I took the highest oath of office in mourning,” she said.

She said that Mr. Magufuli “who always liked teaching” had prepared her for the task ahead. “Nothing shall go wrong,” she assured, urging the nation’s people to be united.

“This is the time to stand together and get connected. It’s time to bury our differences, show love to one another, and look forward with confidence,” she said. “It is not the time to point fingers at each other but to hold hands and move forward to build the new Tanzania that President Magufuli aspired to.”

Ms. Hassan will complete Mr. Magufuli’s second term in office which had just started after he won elections in October.

Ms. Hassan has had a meteoric rise in politics in a male-dominated field. Both Tanzania and the surrounding East African region are slowly emerging from patriarchy.

After Mr. Magufuli selected her as his running mate in 2015, Ms. Hassan became Tanzania’s first female vice president. She was the second woman to become vice president in the region since Uganda’s Specioza Naigaga Wandira, who was in office from 1994 to 2003.

Born in Zanzibar, Tanzania’s semi-autonomous archipelago in 1960, Ms. Hassan went to primary school and secondary school at a time when very few girls in Tanzania were getting educations as many parents thought a woman’s place was that of wife and homemaker.

After graduating from secondary school in 1977, Ms. Hassan studied statistics and started working for the government, in the Ministry of Planning and Development. She worked for a World Food Program project in Tanzania in 1992 and then attended the University of Manchester in London to earn a postgraduate diploma in economics. In 2005, she got a Master’s degree in community economic development through a joint program between the Open University of Tanzania and Southern New Hampshire University in the United States.

Ms. Hassan went into politics in 2000 when she became a member of the Zanzibar House of Representatives. In 2010 she won the Makunduchi parliamentary seat with more than 80% percent of the vote. In 2014 she was appointed a Cabinet minister and became Vice-Chairperson of the Constitutional Assembly tasked with drafting a new constitution for Tanzania where she won respect for deftly handling several challenges.

As president, Ms. Hassan’s first task will be to unite the ruling party, Chama Cha Mapinduzi, behind her, said Ed Hobey-Hamsher, Senior Africa Analyst with Verisk Maplecroft risk analysts. The party has been in power since Tanzania’s independence.

As a Muslim woman from Zanzibar, Ms. Hassan may find it difficult to win the support of the party’s mainland Christians, he said, warning that some entrenched leaders may develop “obstructionist strategies” against her. He said it’s likely that Ms. Hassan will start her rule by maintaining the status quo and not embarking on a significant Cabinet reshuffle.

Ms. Hassan is the second woman in East Africa to serve as the head of government. Burundi’s Sylvia Kiningi served as president of that tiny landlocked country for nearly four months until Feb. 1994.