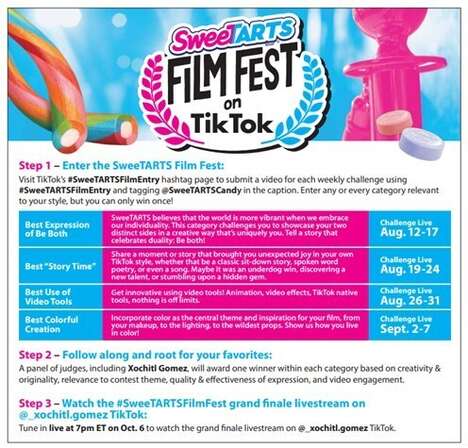 It’s once again time for the Perseids, one of the best…

For Electric Vehicle Makers, Winners and Losers in Climate…

The Summer of NIMBY in Silicon Valley’s Poshest Town

Aug 12, 2022
TikTok started out as a platform where users could share 15-second clips with one another, which shortly grew to 60-second clips and now three-minute videos—fittingly, SweeTARTS is hosting a branded film festival on TikTok. Submissions for the SweeTARTS Film Fest on TikTok are opening soon and it aims to inspire and engage the next generation of visual storytellers, all the while proving that fancy equipment, powerful connections and big budgets aren’t central to telling great tales.

Fans can submit and view short TikTok films in four film categories: “Best Expression of ‘Be Both,'” “Best Story Time,” “Best Use of Video Tools” and “Best Colorful Creation.” The winners will be chosen by a panel of judges that includes Xóchitl Gómez (who boasts millions of followers on the short-form, video-sharing app.)