Should international garment companies be doing business in Myanmar? 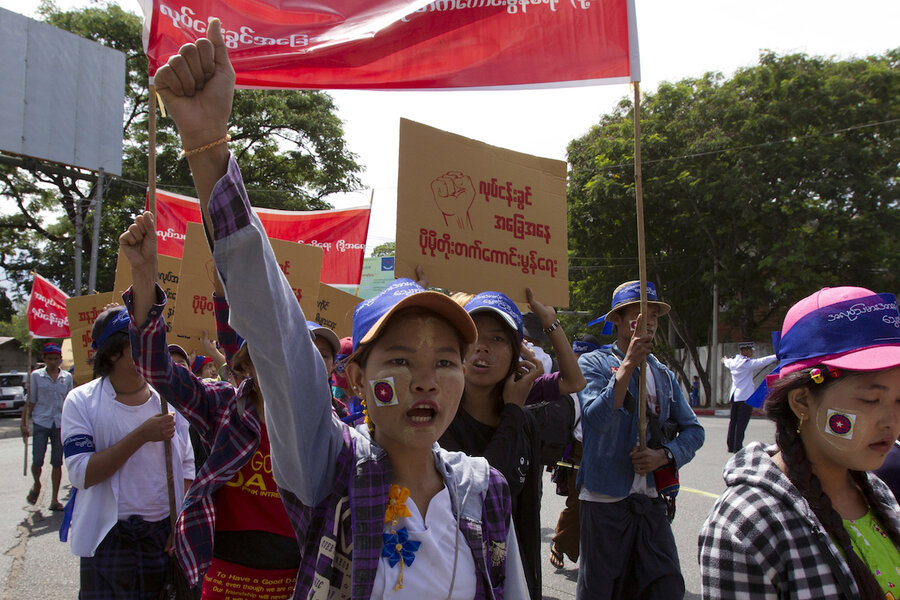 Tin Tin Wei used to toil 11 hours a day, six days a week sewing jackets at a factory in Myanmar. But she hasn’t stitched a single garment since the coup in February.

Instead, the 26-year-old union organizer has been protesting in the streets – and trying to bring international pressure to bear on the newly installed junta.

Her union, the Federation of Garment Workers in Myanmar, and others have been staging general strikes to protest the coup and are urging major international brands like H&M and Mango, which source some of their products in Myanmar, to denounce the takeover and put more pressure on factories to protect workers from being fired or harassed – or worse arrested and killed for participating in the protests.

“If we go back to work and if we work for the system, our future is in the darkness, and we will lose our labor rights and even our human rights,” said Ms. Tin Tin Wei, who has been a clothing factory worker since age 13.

The response from companies so far has been mixed. Only a few have said they would curtail their business in Myanmar. Most others have put out statements that stop short of taking action, saying that while they denounce the coup, they want to support the workers by providing them with jobs.

Ms. Tin Tin Wei’s union and the Confederation of Trade Unions in Myanmar have also been demanding comprehensive international sanctions – not the targeted sanctions some have imposed – to bring down the junta that ousted the civilian government of Aung San Suu Kyi.

As international sanctions were dropped in the mid-2010s when Myanmar began shifting toward democracy after decades of military rule and started to set some labor standards, Western brands looking to diversify their sourcing were attracted to the country’s cheap labor. Broad sanctions now would cripple that burgeoning clothing industry, which has been growing rapidly in recent years before the coronavirus pandemic cut orders and eliminated jobs.

Comprehensive sanctions could wreck the livelihoods of more than 600,000 garment workers, but some union leaders say they would rather see massive layoffs than endure military oppression.

“I need to do some sort of sacrifice in the short term for the long term for our next generation,” said Ms. Tin Tin Wei, who is the sole breadwinner in her family and has been receiving food donations.

The civil disobedience movement, or CDM as it is known, has included railway workers, truck drivers, hospital, bank employees, and many others determined to stifle the economy.

The aim is “no participation with the junta at all,” Sein Htay, a migrant labor organizer who returned to Myanmar from Thailand said in an emailed comment. “We believe that CDM is really working. So we are motivated to continue.”

But violent crackdowns by Myanmar security forces against protesters including garment workers are escalating. Troops shot and killed at least 38 people Sunday in an industrial suburb of Yangon – an area dominated by clothing factories – after Chinese-owned factories were set on fire. Tens of thousands of workers and their families were seen fleeing the area in the days that followed.

The garment industry plays a key role in Myanmar’s economy, particularly the export sector. Roughly a third of Myanmar’s total merchandising exports come from textiles and apparel, worth $4.59 billion in 2018. That’s up from 9%, or $900 million, in 2012 as international sanctions were dropped, according to the latest data from the European Chamber of Commerce in Myanmar.

Myanmar’s apparel exports mostly go to the European Union, Japan, and South Korea because of favorable trade agreements. The United States accounts for 5.5% of Myanmar’s exports, with clothing, footwear, and luggage representing the bulk of that, according to garment trade expert Sheng Lu.

But Myanmar still accounts for a tiny share – less than 0.1% – in U.S. and E.U. fashion companies’ total sourcing networks. And there are plenty of other alternatives for brands.

Despite this, many are taking a wait-and-see stance when it comes to any long-term decisions. Experts note it’s not easy to shift products to a different country, nor is it easy to return to Myanmar once companies leave. Furthermore, some argue Western companies play a role in reducing poverty by giving workers in Myanmar opportunities to earn an income while also helping to improve labor standards there.

Factory working conditions were already poor before the February coup, but the labor unions had made some inroads and gave workers hope. And while the National League for Democracy, the party that was ousted in the takeover, wasn’t proactively protecting unions, it didn’t persecute or crack down on them, says Andrew Tillett-Saks, a labor organizer in Southeast Asia who previously was based in Myanmar.

Asian brands have so far remained quiet about the turmoil. The American Apparel & Footwear Association joined other groups like the Fair Labor Association in condemning the coup while urging members to honor existing financial contracts with factories there.

L.L. Bean CEO Steve Smith said he was saddened by the situation in Myanmar, which he visited in 2019. Bean uses several factories and suppliers for three product lines.

Other companies have been more forceful in their response. For instance, Hennes & Mauritz and The Benetton Group have suspended all new orders from factories in Myanmar.

“Although we refrain from taking any immediate action regarding our long-term presence in the country, we have at this point paused placing new orders with our suppliers,″ H&M said in a statement. “This is due to our concern for the safety of people and an unpredictable situation limiting our ability to operate in the country.”

Spanish brand Mango said it would work with its trade and union partners, globally and locally in Myanmar, to ensure there’s no retaliation against any factory worker or union leader exercising their civil or union rights.

Moe Sandar Myint, chairwoman of the Federation of Garment Workers in Myanmar who organized small strikes on factory floors that later moved to the streets, said brands aren’t doing enough to help workers. She wants to see “concrete action.”

Nearly 70% of the garment factories in Myanmar are owned by foreigners, according to the European Chamber of Commerce in Myanmar, and a good chunk of them are Chinese-owned. International brands using the factories don’t directly hire the workers, often depending on a web of contractors and sub-contractors to produce goods for them.

But companies have “an enormous amount of influence in the industry,” Mr. Tillett-Saks said. “They hold all the power over the supplier.”

Ms. Tin Tin Wei says escalating intimidation by the military is scaring some employees at her factory. Located in the Hlaing Thayar industrial zone, it unionized five years ago. Out of 900 workers employed at the factory, 700 initially joined the protests but that number dropped to 500 by early March, she said.

Ms. Moe Sandar Myint, who’s in hiding and moving from one safe house to another after the police raided her home in early February, said she will keep fighting.

“I cannot allow my generation and my next generation to live through another military leadership,” she said. “This is unacceptable.”

This story was reported by The Associated Press. AP writers Grant Peck in Bangkok and Dave Sharp in Freeport, Maine, contributed to the report.

‘After the Murder of Albert Lima’ Review: Justice His Own Way