A group of Sri Lankans held captive by Russian forces in an agricultural factory in eastern Ukraine has alleged torture for months before escaping on foot as the Russians withdrew from the Kharkiv region.

Recounting their ordeal to reporters in Kharkiv, Ukraine’s second-largest city, one of the seven Sri Lankans said he was shot in the foot. Another had his toenail ripped off and was slammed in the head with the butt of a rifle.

“Every day we were cleaning toilets and bathrooms,” Dilukshan Robertclive, one of the former captives, said. “Some days Russians came and beat our people, our Sri Lanka people.”

Four of the seven were medical students in the city of Kupiansk and three were working there when Russian forces poured across the border in late February and occupied large swaths of eastern and southern Ukraine.

The group said they were captured at the first checkpoint out of Kupiansk and then taken to Vovchansk, near the border with Russia, where they were held in the factory with about 20 Ukrainians.

“They took our passports, other documents, phones, clothes, and locked us up in a room,” said Sharujan Gianeswaran. “There were also Ukrainian people with us, and they were questioned and sent away in 10 days, 15 days or one month. With us, they never spoke, because they could not understand our language.”

Ukraine police said the factory housed a Russian “torture centre” – one of 18 in the Kharkiv region.

“They were bound and blindfolded. After that they were captured and then taken to the city of Vovchansk,” said Serhiy Bolvinov, head of the investigative department of the National Police in Kharkiv. 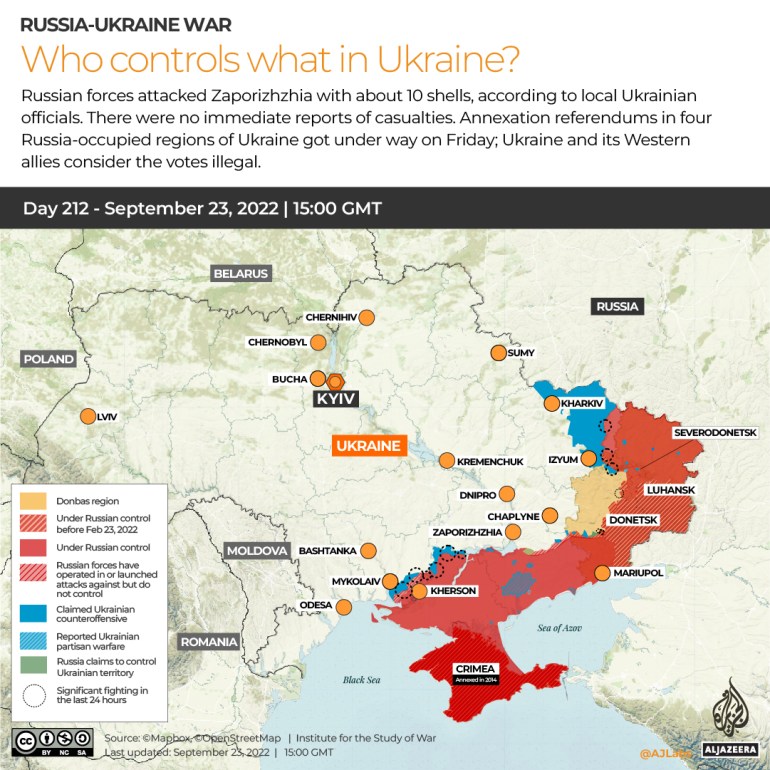 Six among the group said they were held in a large upstairs room. The seventh, the only woman, was kept in a dark cell by herself, her companions said. The woman wept silently and did not speak as the group told their story on Saturday.

One man said he was shot in the foot by his Russian captors. Another had a toenail ripped off after the soldiers repeatedly bashed it with the butt of a rifle. The men showed their injuries to journalists.

“Most of the time we could not understand what they told us and we were beaten for that,” Gianeswaran said.

It dawned upon the Sri Lankans that battle lines were shifting only when Russian soldiers ordered them to help load trucks with food and weapons.

As the last trucks raced away, the group asked fruitlessly for their passports and documents back, knowing to move around without them would be impossible in a country filled with checkpoints.

When the Sri Lankans realised the Russians were gone on September 10, the group left the factory and started walking towards the city of Kharkiv, having no real idea how to get to the regional capital that remained in Ukrainian hands.

“We walked on that road for two days and were exhausted and hungry. We had no food or money to buy food,” Gianeswaran said.

They slept on the side of the road and walked until they reached a river. But with so many bridges in the region destroyed by one side or the other in months of fighting, they could find no way to cross.

Finally, someone noticed their plight, gave them shelter, and called for a ride from security forces.

Police said the group was picked up in the Chuhuiv area, 70km (40 miles) from where they started. They are in Kharkiv now with no idea of what the future holds. Robertclive said they are psychologically damaged by their months in captivity.

But the men smiled when asked how they felt when they realised the worst of their ordeal was at an end.

“They [Ukrainians] have given us food and clothing,” Gianeswaran said. “We thought we were going to die but we are saved and are being well looked after.”

Spotted lanternflies are thriving in the Northeast and could spread farther