Telehealth is booming. Can it close gaps in healthcare equity? 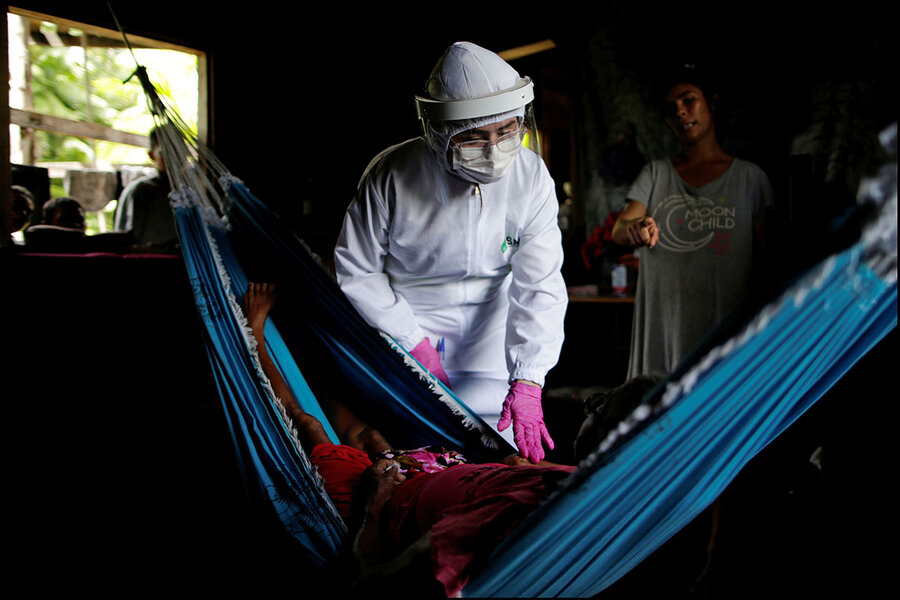 Canada and Brazil face a common challenge of delivering healthcare across vast distances to populations often isolated from urban centers. Experiments with virtual care went into overdrive last year when the pandemic first hit. The adoption of telemedicine could be a boon for isolated communities – and for marginalized residents of towns and cities who can’t find time to visit a doctor.

Health professionals on the front lines welcome the renewed attention on virtual care. They also caution that it’s essential not to replicate existing inequities in the rollout of telehealth services. And that national health systems must continue to serve everyone and not turn telehealth into a private carve-out that could undermine universal healthcare.

Telehealth has expanded during the pandemic. It could become an equalizing force for remote, rural area and other underserved communities that lack robust care services.

One advantage of virtual consultations is that they avoid the intermittent delivery of services to communities like those in Canada’s far north, including Indigenous villages, says John Pawlovich, a family physician working in British Columbia.

“The historical model for many remote Indigenous communities is the itinerant type of care,” he says. “A [provider] may fly in, fly out, boat in, boat out, drive in, drive out, and then when they retreat out of the community, there are these large gaps in time where nobody’s delivering care.”

Canadian Rosie O’Reilly works as a nurse in a former gold mining town in British Columbia, far from cities, medical resources, even cellphone service. That means Ms. O’Reilly often attends to local medical emergencies alone – part of the bargain of working in Atlin, which is closer to Anchorage than Vancouver.

Much farther south, on the other side of the equator in Brazil, the nursing station is equally lonely for Dilcilene Curuaia, who toils in the dark after nightfall because of lack of electricity. She works in the traditional Amazonian community of Gabiroto, where many homes are elevated on wooden stilts along the banks of the Xingu River.

Over the past year, however, both women have seen dramatic changes in their situations. Driven by necessity amid the pandemic, care delivery has seen a rapid technological overhaul.

Telehealth has expanded during the pandemic. It could become an equalizing force for remote, rural area and other underserved communities that lack robust care services.

Ms. O’Reilly says a new platform that links her community to specialists across her province has been transformative – and could prove an equalizing force for rural communities. For her part, Ms. Curuaia can now turn to doctors in São Paulo for guidance, thanks to a nongovernmental program implemented after Brazil enacted new laws to allow telemedicine.

“We’ve had a chance to look at things in a different light because of the pandemic,” says Ms. O’Reilly. “And just because we live in a rural, remote community doesn’t mean that we should have access to less.”

Both Canada and Brazil are intimately familiar with the inequities that geography builds into healthcare delivery. They’ve previously experimented with ways of delivering care virtually to lessen the distances – from Arctic communities reachable only by plane to jungle communities accessed only by boat. But the pandemic has catalyzed the adoption of telemedicine. Now, those on the front lines of care say, the challenge will be to ensure that geographic, socioeconomic, cultural, and linguistic hurdles are not replicated unintentionally in a virtual model.

“The value proposition of virtual care was immediately demonstrated by the pandemic all over the world, and [it] goes well beyond public health crises,” says Dr. Ewan Affleck, a doctor in Yellowknife, Northwest Territories, who co-chaired the Canadian Medical Association task force on virtual care and is now working with Health Canada to develop standards around quality virtual care. “If we’re not careful, virtual care can increase inequity.”

Leave ‘no one behind’

As virtual health becomes more ubiquitous, private doctors and national and regional bodies are all calling for precise standards and procedures so to be inclusive of the elderly who aren’t tech savvy or communities without internet. The Pan American Health Organization, a UN agency based in Washington, recently called on health ministers and officials to adopt standards that leave “no one behind.”

In Canada, the country’s vastness is a factor: 90% of the population lives within 100 miles of the U.S. border; the rest are scattered across the remaining 2,700 miles to the tip of the Arctic.

Dr. John Pawlovich is a family physician who helps support 13 Indigenous communities in north and central British Columbia. He’s been developing telehealth models for a decade, and through his work with the province’s Rural Coordination Center he helped to develop the Real-Time Virtual Support (RTVS) platform that Ms. O’Reilly depends on in Atlin.

“The historical model for many remote Indigenous communities is the itinerant type of care,” he says. “A [provider] may fly in, fly out, boat in, boat out, drive in, drive out, and then when they retreat out of the community, there are these large gaps in time where nobody’s delivering care.”

Virtual care provides a continuum, and not just in rural settings. Dr. Sacha Bhatia, the chief medical innovation officer at Women’s College Hospital in Toronto, says telehealth also allows low-paid workers in urban areas to take a call on a work break and avoid missing a payday by sitting in a doctor’s lobby.

During the first wave of COVID-19 in Ontario, Canada’s largest province, virtual care accounted for 77% of outpatient services delivered, up from 1% in the first quarter of 2020, says Dr. Bahtia. It’s now around half of all services, which is where his hospitalwould like the ratio to stay.

But the shift to telehealth has also thrown up unanticipated inequities. Dr. Chavi Eve Karkowsky, a high-risk obstetrician in New York City, transitioned part of her practice into telemedicine within a week of the city’s spring shutdown.

Many of her low-income patients, including parents with toddlers, spend hours on public transportation to get to appointments. So, at first, she thought a virtual service would be better, even post-pandemic. But she says there are drawbacks, such as the difficulty of communicating with patients who don’t speak English without the nuance of body language. She also worries about what happens if too many resources go online at the expense of in-person care.

“Telemedecine can increase access, but if you’re not paying attention you may be shutting down access,” she says.

Dr. Bhatia in Toronto says he finds some resistance in the medical community and a desire to revert to business as usual when the threat of contact fade. Many also worry about a slippery slope towards privatization of virtual care in a country with a national health system that is available to all Canadians.

“Until recently, the government did not insure telemedicine. And so as a result, there were companies that sparked the ‘virtual walk-in clinic model,” he says. “Many worry that opening the box of telemedicine will lead to a rise in corporate medicine-type services.”

Telehealth can also have a cultural undercurrent. The new telehealth program in Brazil that employs Ms. Curuaia is run by the U.S.-based environmental group Health in Harmony, dedicated to protecting the rainforest. As they see it, the five nurses stationed across nearly 8.5 million hectares in the Amazon not only address a medical gap but are part of a holistic approach to overall community well-being.

If someone in a forest community needs money quickly, it’s often to pay for private healthcare, says Erika Pellegrino, a professor of family medicine and community health at the Medical School at the Federal University of Para and program coordinator in Brazil for Health in Harmony. Quick care at a high price can push them into illegal activities or to leave their land for long periods, leaving it vulnerable to encroachment or cattle ranching, she says. When communities have care options closer to home they can stay in place.

“If people don’t have any guarantee that they can access health care quickly, they don’t feel safe in their territory. They prefer to rent a house in town and move,” she says. “And we know for a fact that forests with people living in them and protecting them, [those] forests stand.”

In Canada, Dr. Pawlovich says that he hopes the platform he developed can reinforce a sense of community security and solidarity as well. “The RTVS work is to try to change culture whereby people go to bed at night knowing that there’s a team of people who have their back,” he says. “We tried to create a safety net, so every British Columbian has access to a virtual physician and health care providers have access to kind, compassionate, thoughtful, virtual support … irrespective of where they are in the province.”

Beyond the Union: a new platform for European cooperation