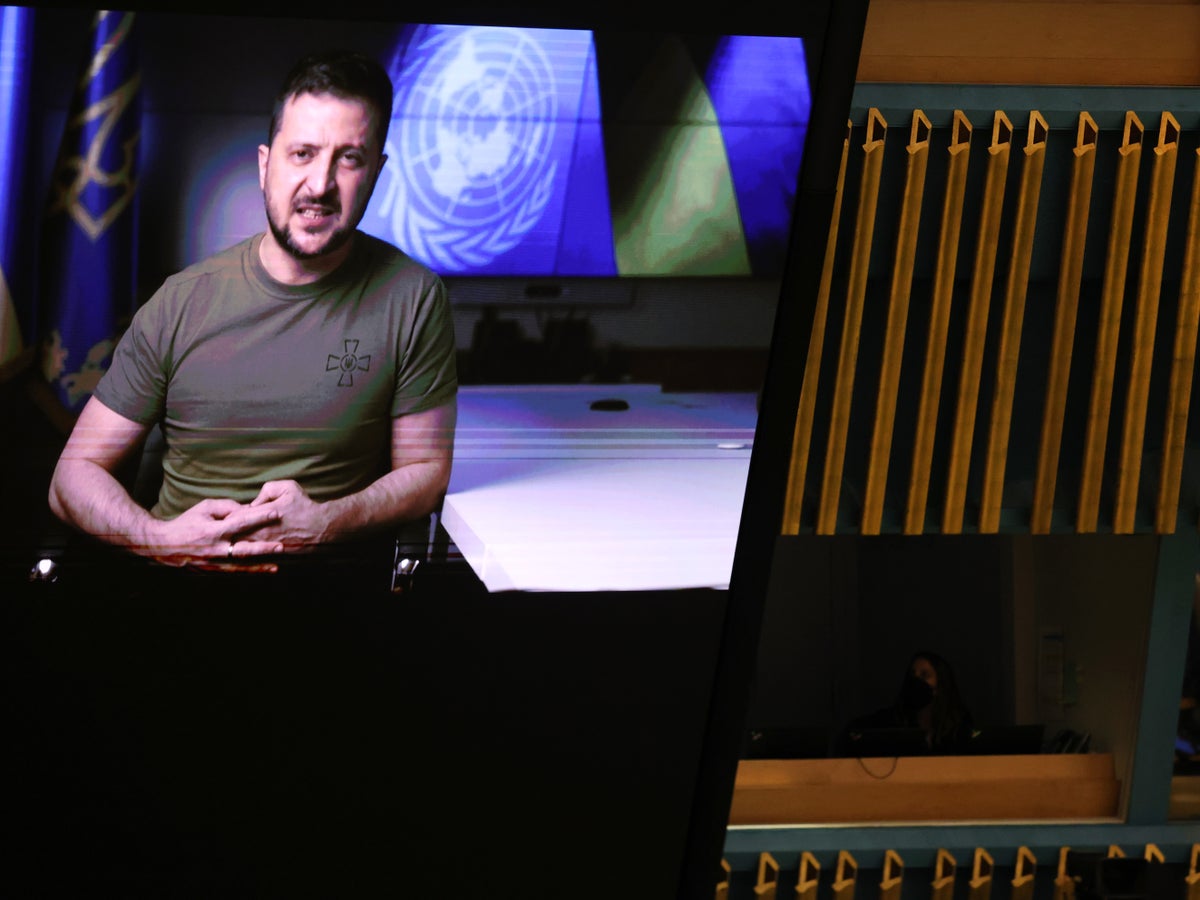 Four Russia-backed territories in Ukraine, amounting to around 15 per cent of the besieged country, will kick-start referendums today to break away from Kyiv amid condemnation from western countries.

The referendums, denounced as a Moscow-led “sham” by the world leaders at the United Nations General Assembly this week, will run from today to Tuesday, following which the Kremlin is expected to announce the annexation of the territories into the Russian federation.

Analysts fear Russia will then use this to justify an escalation in its military offensive against Ukraine.

One day after Vladimir Putin announced the partial military mobilisation of men in Russia’s reserve forces, some 10,000 volunteers have reportedly enlisted without even waiting for their call-up papers, the Russian General Staff said.

But there are also reports of attempts to flee a potential call-up, with prices for one-way flights out of Moscow to the nearest foreign locations rising above $5,000 (£4,440), with most air tickets sold out completely.

And late on Thursday, the Russian foreign minister walked out of the UN Security Council after accusing Ukraine of Russophobia and neo-Nazism.

At least 18 Russian troops were killed, and three Msta-S and Msta-B howitzers, two tanks, and two armored vehicles were destroyed on Thursday, the military unit said, reported The Kyiv Independent.

Volodymyr Zelensky has said Vladimir Putin’s decision to announce partial mobilisation in Moscow is a “frank admission” of the Russian army’s failure in its war against Ukraine.

“Russia’s decision on mobilisation is a frank admission that their regular army, which has been prepared for decades to take over a foreign country, did not withstand and crumbled,” he said in his nightly address on Thursday.

The war has swept into every Russian’s home, he added.

“And now, due to mobilisation, Russia’s war against Ukraine for the majority of Russian citizens is not something on TV or on the Internet, but something that has entered every Russian home,” Mr Zelensky said.

In case you missed it: Britons released by Russian-backed forces in Ukraine thanked supporters as they flew back to Britain. All five have now all returned home:

Five Britons were part of the prisoner swap

Families have bid a tearful farewell to men leaving from military mobilisation centres in Russia. Video footage from the eastern Siberian city of Neryungri showed men emerging from a stadium. Before boarding buses, they hugged family members waiting outside, many crying and some covering their mouths with their hands in grief.

A man held a child up to the window of one bus for a last look. In Moscow, women hugged, cried and made the sign of the cross on men at another mobilisation point.

A 25-year-old who gave only his first name, Dmitry, received a hug from his father, who told him “Be careful,” as they parted. Dmitry told Russian media company Ostorozhno Novosti he did not expect to be called up and shipped out so quickly, especially since he still is a student. “No one told me anything in the morning. They gave me the draft notice that I should come here at 3 pm. We waited 1.5 hours, then the enlistment officer came and said that we are leaving now,” he said. “I was like, ‘Oh great!’ I went outside and started calling my parents, brother, all friends of mine to tell that they take me.”

Months of secret international negotiations lay behind the release of captured British and Ukrainian fighters.

Also released were more than 200 fighters from the Azov Battalion.

Why Moscow is calling referendums

Four occupied regions in Ukraine are set to start voting Friday in Kremlin-engineered referendums on whether to become part of Russia. Here’s why:

Four occupied regions in eastern and southern Ukraine are set to start voting Friday in Kremlin-engineered referendums on whether to become part of Russia, setting the stage for Moscow to annex the areas in a sharp escalation of the nearly seven-month war

Tailbacks at border crossings amid ‘panic’ for tickets

Long tailbacks have formed at border crossings from Russia into Georgia as Russian men continued to try to escape the country.

One news site in Russian gave a list of “where to run away right now from Russia”.

A Russian man, who gave his name only as Vasily, travelled to Istanbul, Turkey, with his wife, teenage daughter and six suitcases.

“The mobilisation was inevitable because there was a shortage of human resources. I am not worried because I’m already 59 years old and my son lives abroad,” he said.

A lorry driver who crossed the Russian-Kazakh border on Thursday said he saw unusually heavy traffic from the Russian side.

A tourism industry source said there was desperation as people sought to find air tickets out of Russia.

“This is panic demand from people who are afraid they won’t be able to leave the country later – people are buying tickets not caring where they fly to,” the source said.

Russia says reports of a mass exodus from the country are exaggerated.

Russian news agencies reported that 10,000 people had volunteered to fight even before their call-up papers had arrived, citing the Russian General Staff.

Anti-war protests in 38 Russian cities led to more than 1,300 arrests on Wednesday, a monitoring group said.

Some of the detainees had been ordered to report to enlistment offices on Thursday, the first full day of conscription, independent news outlets said. More rallies are planned for the weekend.

The UN secretary-general has warned that the latest developments in the war in Ukraine are a step closer to an “endless cycle of horror and bloodshed”.

Antonio Guterres branded Russia’s nuclear threats against the West as being “totally unacceptable” during the United Nations General Assembly in New York.The UN secretary-general warned world leaders that the latest developments in the war in Ukraine are “dangerous and disturbing,” and a step closer to an “endless cycle of horror and bloodshed.””The idea of nuclear conflict, once unthinkable, has become a subject of debate. This in itself is totally unacceptable,” he said. Mr Guterres also deemed the idea of any referendum being held in occupied parts of Ukraine as a “violation of international law.”Sign up for our newsletters.

Plane tickets out of Moscow sell out even at record prices

Prices of one-way air tickets from Moscow have rocketed as Russian men continued to head to the country’s borders after Vladimir Putin ordered a partial mobilisation.

Plane tickets out of the capital to the nearest foreign locations soared above $5,000 (£4,440), with most airline seats sold out completely for the coming days.

Traffic at frontier crossings with Finland also continued to surge, and social media groups popped up with advice on how to get out of Russia.

“War is horrible,” Sergei, a Russian who declined to give his surname, told Reuters as he arrived in Belgrade, the Serbian capital. “It’s okay to be afraid of war and of death and such things.”

One Russian man who gave his name as Alex said he had left Russia partly due to the mobilisation.

“The partial mobilisation is one of the reasons why I am here,” he said. “A very poor step it seems to be, and it can lead to lots of problems to lots of Russians.”

He said he felt not many Russians would want to be sent to fight.

‘Becoming a meme totally helps a show’: is TV being written with epic gifs in mind? | Television

Making food out of carbon dioxide