Why hospitals are beginning to reuse or recycle masks, IV bags, drills they used to t…

It may not be intuitive, but safely reusing medical equipment that has been previously used by doctors or patients can help hospitals save on health care costs, prevent supply shortages and have beneficial knock-on effects for the whole population, say some doctors.

It could also potentially make a dent in the mountains of hospital waste generated each year. In Canada alone, non-hazardous hospital waste could amount to nearly 300 tonnes a day.

Dr. Andrea MacNeill, a surgical oncologist at Vancouver General Hospital is one of several doctors across Canada trying to make the shift from the single-use and disposable equipment hospitals rely on to more reusable masks, gowns and surgical supplies.

MacNeill, a clinical associate professor, is launching the Planetary Health Care Lab at the University of British Columbia in Vancouver that will examine the environmental impacts of health care. She acknowledges that patients often don’t like the idea of using something that has already been used on another patient.

“There is an almost visceral reaction to the idea of reuse,” she said. “I think we’ve been successfully marketed the notion that single-use consumables are safer from an infection prevention perspective, and there’s very little, if any, data to back that up.”

Conversely, she said, there’s is a lot of data showing that reuse is safe when done properly, similar to using the same restaurant utensils as thousands of other patrons.

“There’s no difference between that and using medical devices that have undergone safe-reuse protocols,” MacNeill said.

And there are potential health and environmental benefits to doing so, she suggests.

For one thing, reusable equipment could potentially prevent some of the supply problems seen when the COVID-19 pandemic first hit in early 2020.

At that time, some hospitals, long-term care homes and other front-line facilities faced dangerous shortages of personal protective equipment. Some reportedly even had to stop doing front-line work as a result. 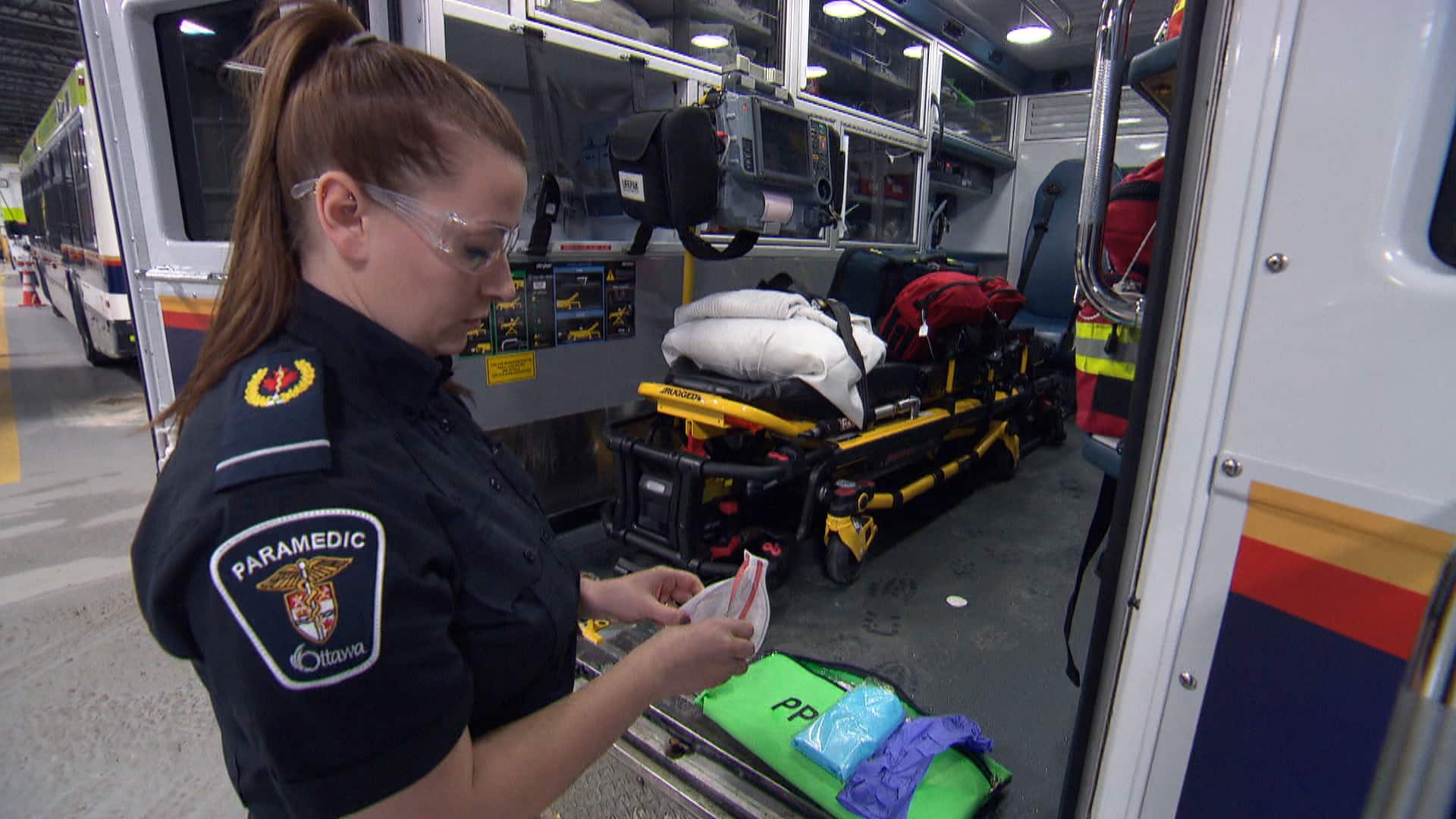 Paramedics in Ottawa are lacking N95 masks and say they can’t do their job without proper protection. It’s not clear when they will get more respirators. They are trying to find alternative sources of masks that meet provincial standards. 7:02

“Part of the reason for that is that we have developed increasing reliance on single-use items, so disposable N95 [respirators], disposable gowns,” MacNeill said.

That was less of a problem at Vancouver General Hospital, where she works, which was well stocked with reusable gowns and respirators.

“Because it’s a lot easier to scale up your reuse cycles, so your laundering of your gowns or your replacement of the filters of your reusable respirators, than it is to actually manufacture more of something,” MacNeill said.

She said supply-chain disruptions such as the ones seen during the pandemic can be expected to become more frequent with future pandemics and climate change-related catastrophes, and the health-care system needs to find ways to address such vulnerabilities.

“One of those is focusing more on reusable supplies rather than single-use consumables.”

Since the start of the pandemic, more research has gone into ways to clean and reuse PPE, such as N95 masks, and some provincial governments have invested in reusable gear. For example, the Manitoba government ordered a million reusable N95 masks that can we worn up to 30 times.

The shortages have also prompted some hospitals to stockpile used masks in case they run out of new ones and need to clean and reuse them.

Reuse can save money

Reusing supplies rather than throwing them away can also cut costs, and some of those savings can be reinvested in patient care.

Since December 2018, St. Joseph’s Hospital in Toronto has been reusing disposable items such as blood pressure cuffs, fingertip oxygen sensors and surgical drill bits that are normally used once before being thrown away. Now, instead of being trashed, they’re cleaned, sterilized, tested and repackaged by a company called Stryker Sustainability Solutions.

The company says each device is individually tested after processing, must meet a U.S. Food and Drug Administration requirement to be “substantially equivalent” to a brand new device and carries a warranty and liability policy similar to those from the original manufacturer.

In 2020, Toronto St. Joseph’s Hospital estimates it was able to reprocess about 900 devices and purchase 600 new ones, saving about $20,000, including $4,000 in waste-hauling costs, said Dr. Ali Abbass, an anesthesiologist and chief of environmental stewardship and sustainability at St. Joseph’s. 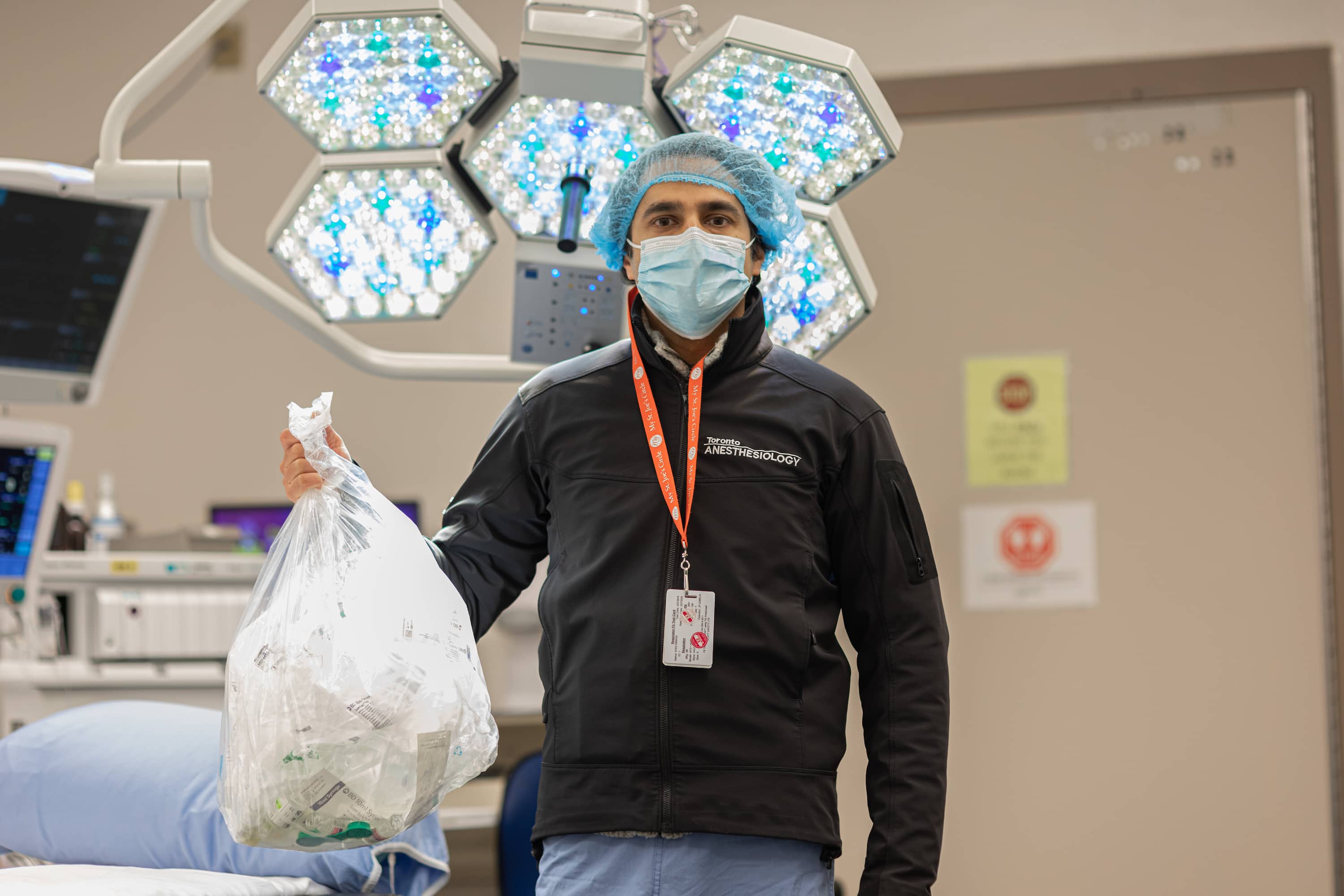 Normally many of the metal items need to go in a sharps container, which is expensive to haul away.

“If you put it in the Stryker collection container, it’s free,” said Abbass, who reached out to the company after hearing about its programs at U.S. hospitals. Abbass said the program is relatively new in Canada after being approved by federal regulators.

The system also reduces environmental costs, as Stryker can reprocess each device five to seven times — reducing the number of new ones that need to be made, Abbass said.

“To me, every hospital in the country should implement it.”

When reuse isn’t possible, recycling may be

Of course, not all materials are durable enough to be cleaned and reused.

That has been the case for disposable medical masks along with IV bags, oxygen masks and oxygen tubing.

For those, recycling may be an option — but one that hasn’t been widely used.

Abbass says that’s likely in part due to the “ick factor,” where hospital waste is perceived to be infectious.

It’s also often hard to find a market even for household plastics that have been recycled let alone recycled medical plastics.

“There’s lots of factors, I think that are in flux,” Abbass said. “And one has to keep following up, I find, to see whether something that isn’t recyclable may now be or vice versa.

In 2009, Abbass heard of a program in Australia that recycled items made of PVC, such as IV bags, oxygen masks and oxygen tubing. He got in touch to ask how it worked, then found a recycler in Ontario, Norwich Plastics, willing to give it a try.

A pilot program for recycling those items from patients who aren’t infectious started at St. Joseph’s in 2016.

Abbass said his hospital alone uses 400,000 IV fluid bags and 70,000 oxygen delivery devices a year. He thinks the majority of them could be sent for recycling if staff are educated about the process and recycling bins are placed in the right places.

The program is gradually being expanded to other parts of the hospital and, in partnership with The Vinyl Institute of Canada and Environment and Climate Change Canada, has launched at six other hospitals in the Greater Toronto Area, with plans to expand to B.C.

Medical masks have not been widely recycled, but some efforts have started up recently. They have been collected for recycling at schools in Ontario and Quebec, for example.

Collection of masks from some Vancouver hospitals also started in February, as part of a collaboration between Burnaby, B.C.-based mask manufacturer Vitacore and Ravi Selvaganapathy, director of McMaster University’s Centre of Excellence in Protective Equipment and Materials in Hamilton. It expects to have collected 200,000 masks by the end of March and aims to expand to hospitals across the country over the next four months.

Selvaganapathy’s lab will receive 25,000. They’ll be melted down for recycling, and the research team is experimenting with pulling them into thin fibres.

“Those can be then chopped up into little bits and can be used as filler materials, for example, in concrete and composites,” he said.

They’re testing the strength of concrete that contains recycled masks to see if it’s stronger than regular concrete.

He sees the potential to integrate recycled plastic from masks into all kinds of other materials used in sports equipment or aircraft. “They could be buried in all of these products,” he said.

MacNeill says the ideal situation is to never have to worry about whether something goes into the recycling bin or garbage can and whether the recycled material can be sold and made into something else.

“My ideal system is absolutely zero waste,” she said, “because what we are purchasing is entirely purpose-built reusable instruments that are actually designed for durability and quality.”

She recognizes that’s a challenge, given that hospitals have been relying heavily on single-use medical supplies since the 1980s in response to the products being marketed as safer and more convenient.

“Nobody was thinking about what the impacts were of manufacturing all of these plastics and of ultimately disposing of them,” she said.

Now, even health regulators in the U.S. factor in the use of disposables when considering a hospital for accreditation, she said.

MacNeill notes that waste and pollution generated by the health care industry is unhealthy for everyone.

“We have a moral imperative to first do no harm,” MacNeill said. “And that includes to the rest of the population who’s not currently a patient, but who is potentially being adversely affected by the implications of the care we’re delivering right now.” 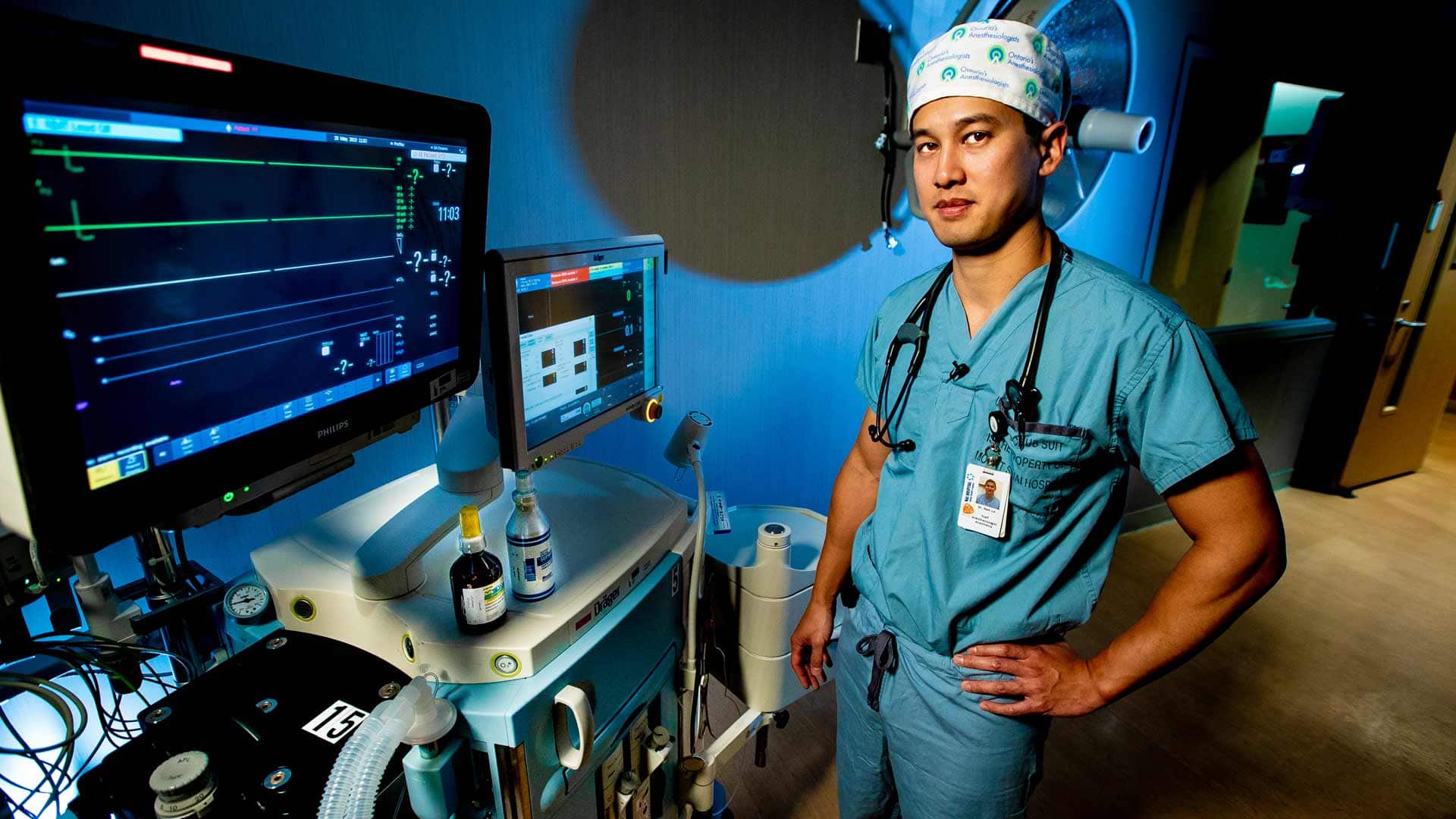 The health-care industry in North America has a pollution problem. One study showed it generates more than eight per cent of greenhouse gas emissions in the U.S. But a few changes in the operating room could go a long way in helping the planet. 3:04

The greenhouse gas emissions from health care are also an issue, she said.

“If we could decarbonize health care, it would be nearly equivalent to eliminating air travel. So we actually have a massive opportunity.”

That’s something the National Health Service in England has acknowledged by committing to produce net zero emissions.

MacNeill is confident it’s something Canada can also achieve, too. “One hundred per cent, we can get there.”