Why the Egyptian government is moving out of Cairo 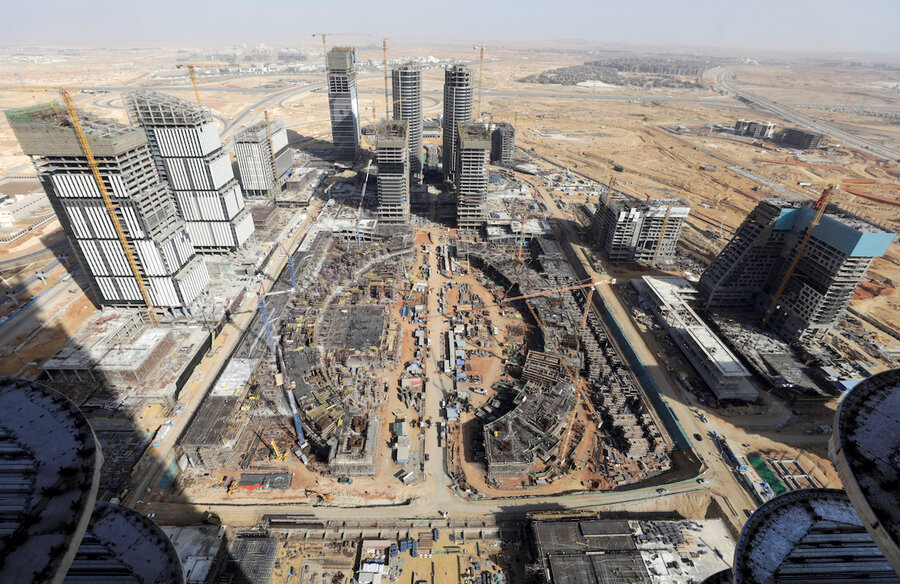 Egypt is racing to prepare a grandiose new capital city in the desert east of Cairo before the first civil servants move in this summer and ahead of the delayed official opening of President Abdel Fattah al-Sisi’s flagship project.

At the heart of the city, workers are putting finishing touches to an avenue of ministries that echo the architecture of pharaonic temples and adjoin a raised Islamic complex, two domed parliament buildings, and a sprawling presidential compound.

There will be a monorail passing through a business district where a 1,200-foot central tower is close to completion. Beyond, the contours of a park stretching to a giant mosque are taking shape.

The city, known simply as the New Administrative Capital, is designed to operate with smart technology on virgin land away from the clutter and chaos of Cairo. It will boast universities, leisure facilities, and a diplomatic quarter.

But it has made halting progress. After funding from the United Arab Emirates fell through shortly after it was announced in 2015, the military and government took on the estimated $25 billion cost of the first phase, injecting off-budget investment.

Some foreign loans and financing have been secured.

The coronavirus pandemic also slowed progress, and the first of three planned phases, covering 65 square miles, will not be completed when the government begins to move in.

“The rate of completion of the first phase has passed 60% across all projects,” said Khaled el-Husseiny, spokesman for the new capital.

He added that the delayed transfer of civil servants would begin in July, ahead of an official opening planned for the end of 2021.

The city is being designed as a high-tech model for Egypt’s future.

Control centers will monitor infrastructure and security electronically, roofs will be covered in solar panels, payments will be cashless, and 161 square feet of green space are allocated per inhabitant, officials said.

“We are trying to solve all the problems we had in the past in the new capital,” said Mr. Husseiny.

The finished city is expected to house at least 6 million residents, with its second and third phases being largely residential.

That will take decades to complete, although the government will be able to function normally while construction goes on, said Amr Khattab, spokesman for the Housing Ministry, which is responsible for executing parts of the city.

How far and how fast Egypt’s center of gravity shifts away from Cairo to the new capital 28 miles from the Nile is unclear. For now, thousands of residential blocks stand empty either side of a highway leading into the new city.

The completion of the business district, yet to be marketed, is set for 2023.

Electric train and monorail links are under construction. The first 50,000 civil servants expected to relocate to the new capital from this summer will be offered shuttle buses to get there.

Around 5,000 out of 20,000 housing units have been sold in the first residential district expected to open in May, said Mr. Khattab.

On Monday, Sisi’s office announced 1.5 billion Egyptian pounds ($96 million) in incentives for civil servants selected to move to the city.

Officials say the city will eventually include social housing and is meant to finance itself through land sales, though it is unclear how much revenue these have generated.

Of the $25 billion cost for the first phase, about $3 billion is being spent on the government district, said Mr. Husseiny.

Some international financing has been secured for rail links, and a $3 billion Chinese loan has helped fund the business district, built by China State Construction Engineering Corp.

Mr. Sisi, who has embarked on multiple infrastructure mega-projects and national development programs, says other regions will not be neglected.

“We are not leaving Cairo, or Alexandria, or Port Said, or other provinces. We are moving forward with the old and the new together,” the president said last week. The capital’s opening would mark the “birth of a new state,” he added.

Though there is support for the government’s argument that the new capital can reduce congestion in Cairo, there is also concern that it will be unaffordable and inaccessible to many.

“Some classes will be able to live there, others won’t,” said Alaa Ibrahim, an electrician in Cairo’s impoverished Imbaba district.

This story was reported by Reuters.

What the U.S. Missed With Google